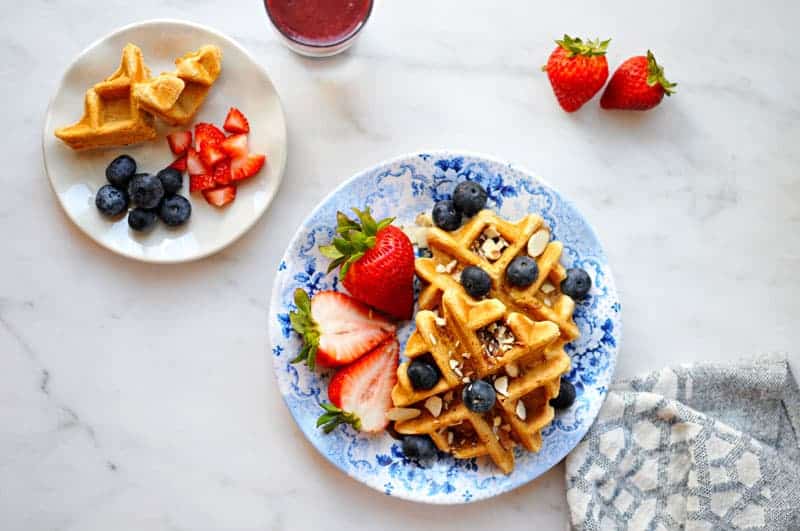 Pigtales is a glimpse at the going-ons that take place (mostly) outside of the P&Q kitchen. Baby stuffs, things I love, general musings and other tales from my life as a momma, wife and semi-professional goofball.

When we were first transitioning Lana to solids, I remember feeling wholly and completely overwhelmed. Moreso than I anticipated, to be sure. Moreso, maybe even, than I felt when we were first finding our way with nursing, which was not without its own struggles. But with nursing, I kept coming back to the idea that I was designed for this. That my body grew Lana’s body and, as its maker, would find a way, would make a way, to give that bod everything it needed, when it needed it. And that Lana would respond in kind with telling cues — coos, soft sighs, tiny grunts, whines and fitful cries — as if to say you’re doing it right, mom or you’re doing it wrong, mom. Or sometimes, and of this I’m sure, you’ve completely lost your shit, mom, and now I’m losing mine. But we made our way.

With solids, however, there wasn’t a cryptic manual encoded via biology. There was spoon-feeding, baby-led weaning, and passionate camps of respectable people (pediatricians, dietitians, lactation consultants) petitioning for and against every variable you could imagine. Four months versus six months. Foods to encourage, foods to avoid. When and how to introduce “meals.” Wait a minute – meals? WTF even counts as a meal? And how does this work with nursing? Do we offer solids WITH milk? Solids BETWEEN milk? What if she’s not eating? As someone who quite literally cooks for a living, I was shocked by how paralyzed I became in the face of preparing my babe for the world of food.

So here’s our story. Not what I read or researched (if you’re a new or soon-to-be parent reading this, chances are you’ve already read much of the same), but a short discussion of what worked for us — plus a few of the baby feeding products that we’ve come to love. And two new, simple, allergy-friendly recipes for a growing babe that are equally suited for big people, too: Vegan Coconut Waffles (or Pancakes) and the simplest Vanilla Chia Pudding. (If that’s all you came for, feel free to click here to jump straight to the food.) Enjoy! 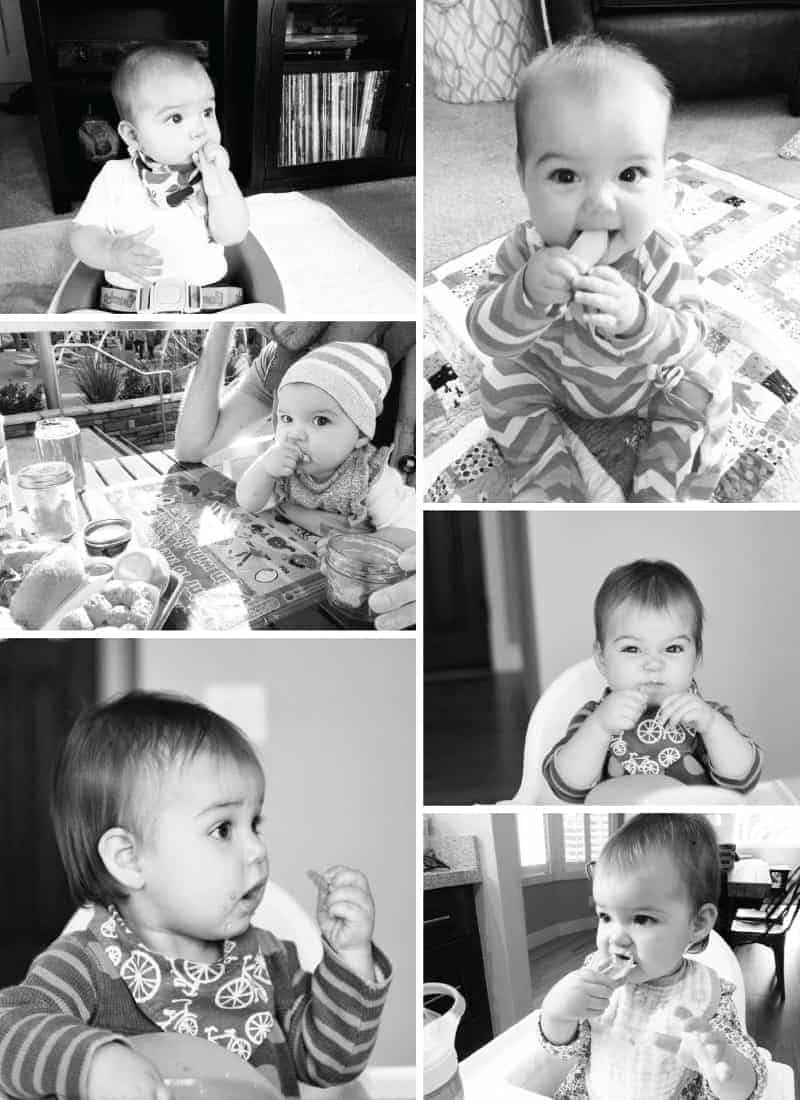 At what age did you start solids? Officially, we started solids at six months. We were given the go-ahead from our pediatrician at four months, but we just kinda felt like waiting. I don’t have a better reason than that. Lana was nursing like a champ, and though she seemed interested in the food we were eating, she didn’t necessarily seem interested in eating it, if that makes sense. I was confident she was getting everything she needed from the copious amounts of milk she was drinking, and that was that. Unofficially, however, Lana’s first experience with solids came in the form of chilled celery sticks around five months or so. One day I was snacking on a few while she was playing beside me, chin covered in a thick layer of drool from her impending first teeth, and when she reached for one, I handed it over. Until she actually cut those first teeth a month later, a chunky stick of celery straight from the fridge was her teether of choice and soothed away the fussies during many a witching hour. 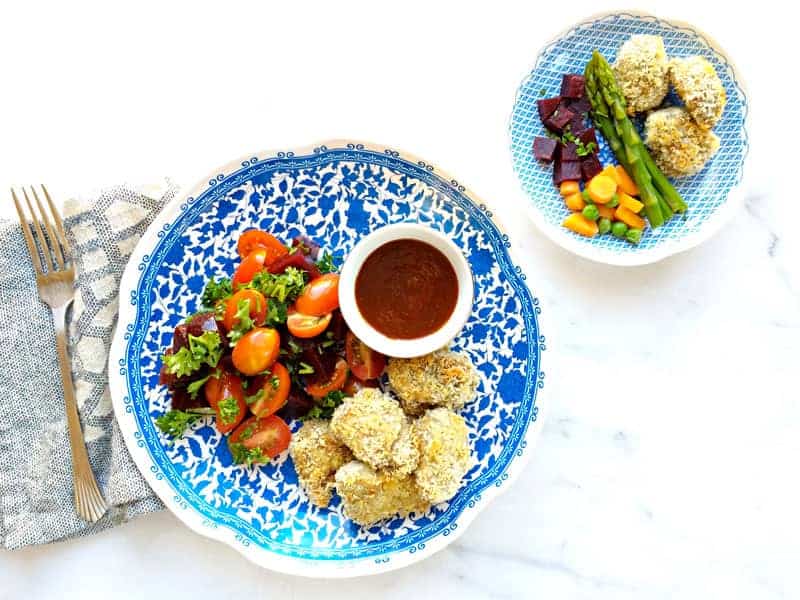 Why did you choose baby-led weaning? To be honest, baby-led weaning sort of chose us. And that’s not to say we did it exclusively. Celery sticks aside, Lana’s first attempt at solid food was good old fashioned organic baby cereal (oatmeal), offered by spoon. I expected her to open wide and swallow it right down, but she showed very little interest. Over the next week we tried baby oatmeal again, then steamed puréed apples, then steamed puréed apples mixed with baby oatmeal, all of which she regarded with uncertainty. Finally, taking a cue from her interest in the celery “teether,” we offered her a single stick of butternut squash to munch, soft-steamed and about the size of a steak fry, and away she went. Half-gumming, half-sucking, she probably managed to get down a quarter of it, while the rest she pulled into pieces and pushed onto the floor or rubbed into her hair, but it was clear she enjoyed the experience. A couple of days later, we offered her a soft-steamed green bean to equal success. Then soft-steamed zucchini crescents, and soft-steamed apple slices and so on. (Note: we started with large, handheld pieces of everything, and as it became clear that she was actually consuming more than she was throwing and her dexterity improved, we began offering smaller, pea-sized items that presented less of a choking hazard and did wonders for her pincer grasp.) All the while, we also continued to offer baby cereal (which she never really grew to love) and simple homemade fruit and veggie purées via spoon. 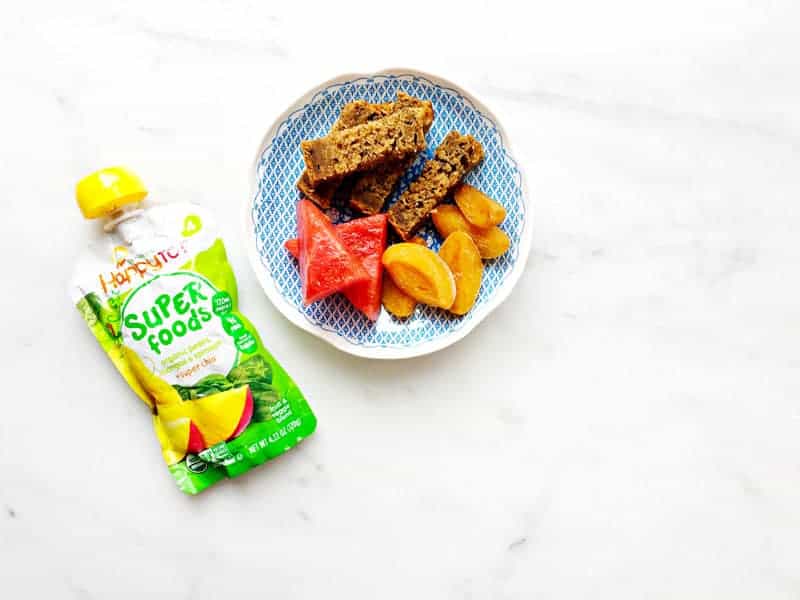 What foods did you initially offer? As I mentioned above, we started with baby cereal, more for the iron fortification than anything else, followed by apples, butternut squash, green beans, peas, avocado, sweet potatoes and spinach. On the protein front, we offered mashed black beans and tiny bites of soft tofu and a couple tiny nibbles of Thanksgiving turkey (around seven months). At eight months, we discovered Lana’s love of sardines.

What about common allergens? I’ve written time and again that Lana showed dairy sensitivities when nursing, so we avoided dairy completely — including yogurt and non-cow’s milk dairy — in both of our diets until only recently. We also introduced Lana to whole eggs in the form of scrambled eggs a little on the early side and learned of her allergy only after three or four unremarkable experiences. (Luckily, it was only hives followed by vomiting, which is traumatic, indeed, but not nearly as serious as some allergies present themselves.) We gave her wheat toast at about eight months with no adverse reactions and waited until she was about a year to introduce tree nuts and berries. To date, she still hasn’t had shellfish or peanuts, though it wasn’t at all intentional (in fact, I’m only realizing that as I write this now!). 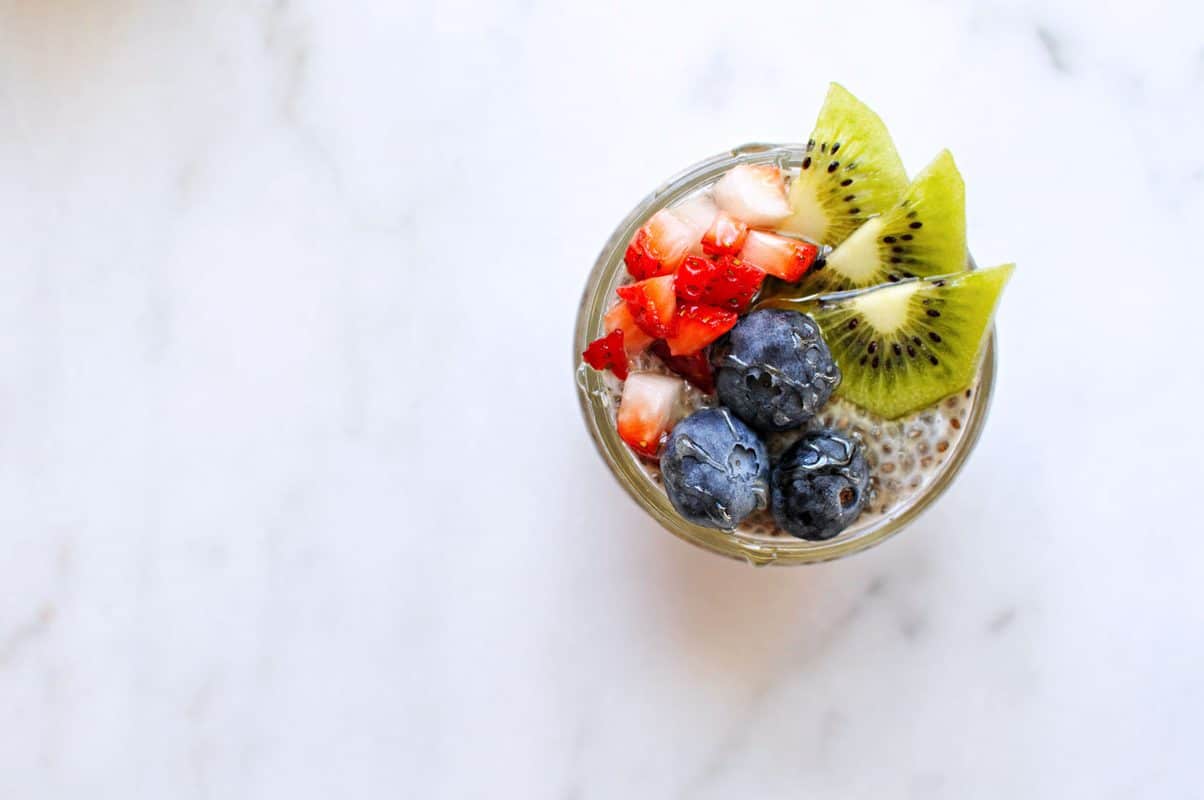 How about quantities — what constitutes a meal? So glad you asked!! Those first days and weeks — the first couple of months even — we treated solids as more of an exploratory experience than a nutritional requirement. We started with one offering a day, usually at “lunch” or “dinner,” that would consist of maybe a single stick of squash and a green bean; then evolved that to one offering a day of a few tiny cubes of fruit and veg plus a few spoonfuls of puréed peas or spinach; then evolved that to two and then three offerings a day of mostly handheld foods. By nine months, Lana was enjoying three small meals a day, plus four to five nursing sessions in between.

Today, however, Lana’s meals are just what you see here (or rather, what you see over on our #lunchingwithlana feed on Instagram): essentially, scaled-down versions of what Chris and I eat, stripped of excess sugar and salt, though we’ve introduced her to plenty of spices and flavors. And while preparing three meals a day, plus healthy snacks, for a babe that can only kinda-sorta eat what I eat still presents a challenge, it’s been so much fun sharing mealtime together and witnessing her enthusiasm for trying new things and the pure joy on her face when she recognizes foods that have become her favorites: the aforementioned sardines, watermelon, blueberries, roasted broccoli, zucchini, lentils — or the real treat: anything bigger than her palm that she can practice pulling apart or nibbling with her seven-going-on-eight teeth. Ah yes, and we’re still nursing round about four times a day.

What about eating out with a babe? Two tips here: 1) Know your Baby Radius, and then add a few inches. That usually means choosing a four-top even if it’s just the two of us and hiding some of the tabletop distractions on an unused chair until mealtime is over (who knew a ketchup bottle could be so tempting?), and 2) Bring Your Own Veggies!! Regardless of how wide a variety of foods your little one eats, there’s often a good chance the veggies you’ll find when you eat out aren’t the most babe-friendly. Grilled chicken and a few bites of gut-boosting sourdough bread are easy to come by, but when it comes to restaurant vegetables, salads can be kinda crunchy, the sautéed stuff can be a little high on salt, and french fries — while one of Lana’s fave treats — don’t really check the veggie box. So bring a little mason jar of fruits and veggies from home as the foundation of the meal and round it out with a few tastes from your plate. And when in doubt, add a side of avocado. 🙂

Biggest tips for starting solids? The best general advice I received when agonizing over the starting solids thing was actually the same advice I received when we started breast-feeding — and it came from the same person, my best-friend-turned-lactation-consultant, Whitney — and that was: let her lead the way. That’s not to say Whitney guided us toward baby-led weaning; more simply, it just meant watching Lana’s reaction to experiencing solid food and following her cues. The most functional advice I can offer regarding solids is to have fun with textures and shapes. We’re so fortunate that Lana turns up her nose at very little, but when she begins to burn out on a particular food, offering it to her in another form or shape (purée vs. whole, matchstick vs. cubes) almost always re-engages her interest. 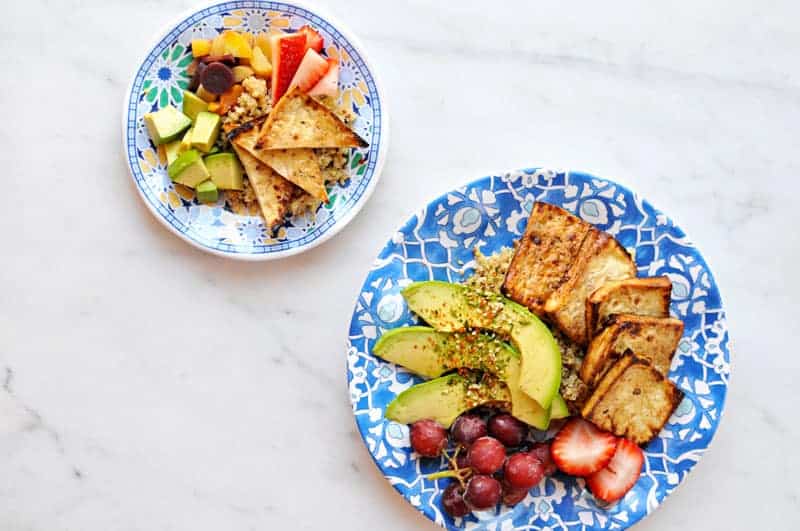 Our Five Fave Products for Feeding the Babe 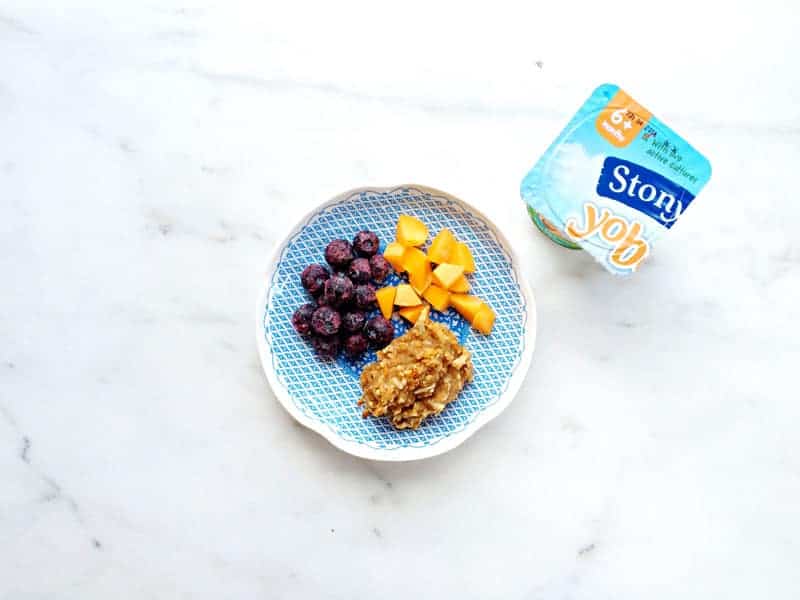 #breakfastwithlana: frozen blueberries (I partially thaw and then halve them), apricots, plain whole milk yogurt and one of Lexi’s breakfast cookies (sans add-ins)

That’s it, guys! Have the best day — and even if you’re not in Camp Baby, check out the recipes below. You’ll have those waffles on repeat in no time. 😀

ps – Also in the Pigtales series: Five Things I Learned as a New Mom and A Day In the Life

This post is sponsored by Q Squared NYC, a mother-daughter brand (appropriate, right?) that I’ve been smitten with for some time. Be sure to shop their First Weekend of Summer Sale June 17-19! As always, I only support partners whose products and practices complement those employed in The Pig & Quill kitchen. Thanks for supporting the brands that help keep this piggy cooking! 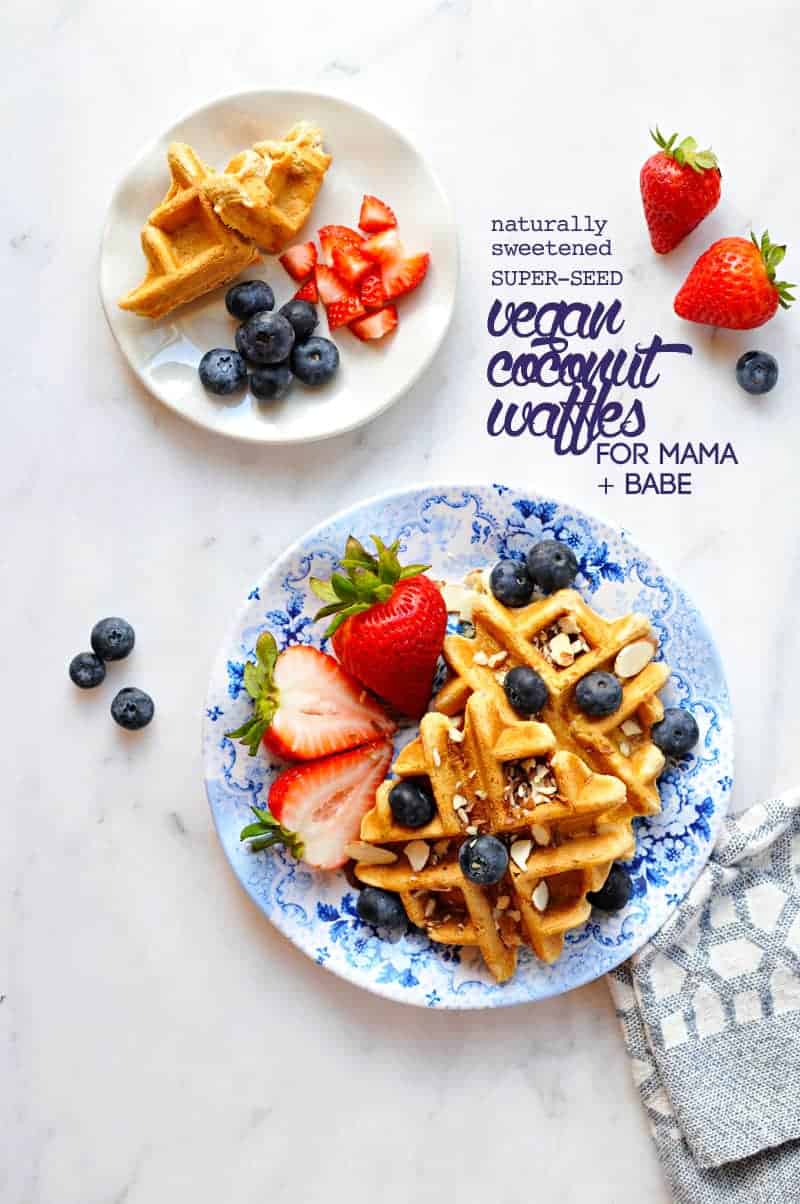 vegan coconut waffles (for mama + babe)
Print
Prep time
5 mins
Cook time
20 mins
Total time
25 mins
Dairy-free, egg-free and naturally sweetened, these waffles are the perfect handheld snack or breakfast for babes -- and perfectly delicious for grown folks, too!
By: Emily Stoffel
Makes: 4-5 midsized waffles
Ingredients
Instructions
Notes
We're definitely waffle advocates in this house, but this recipe works just as well for pancakes, too! (In fact, we first used it with pancakes and only recently upgraded it to waffle status.) If you're short on time, or if you feel more comfortable giving baby something softer and fluffier, pancakes are for you! Just prepare the batter as written, thinning it with a little more non-dairy milk, as needed, and cook it up on a medium griddle in a little avocado oil, flipping when pancakes are brown at the edges and bubbles form on the surface. Yum!
3.4.3177 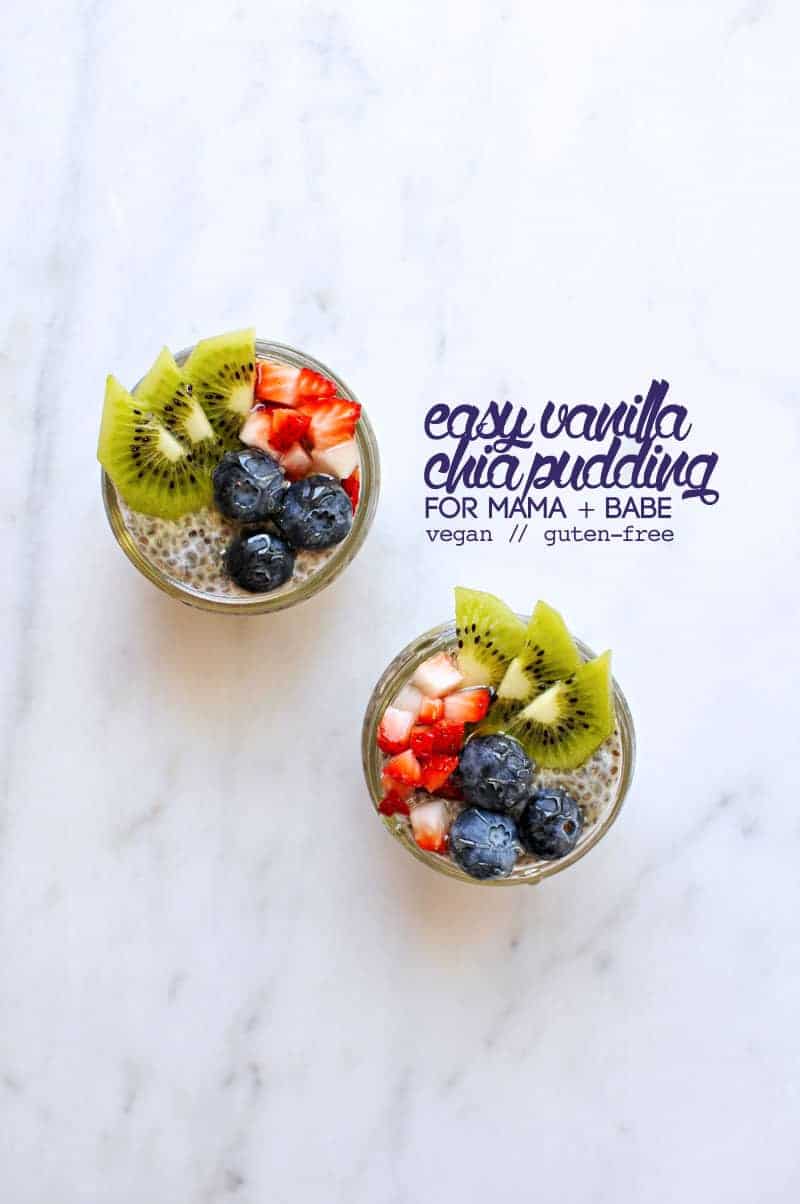