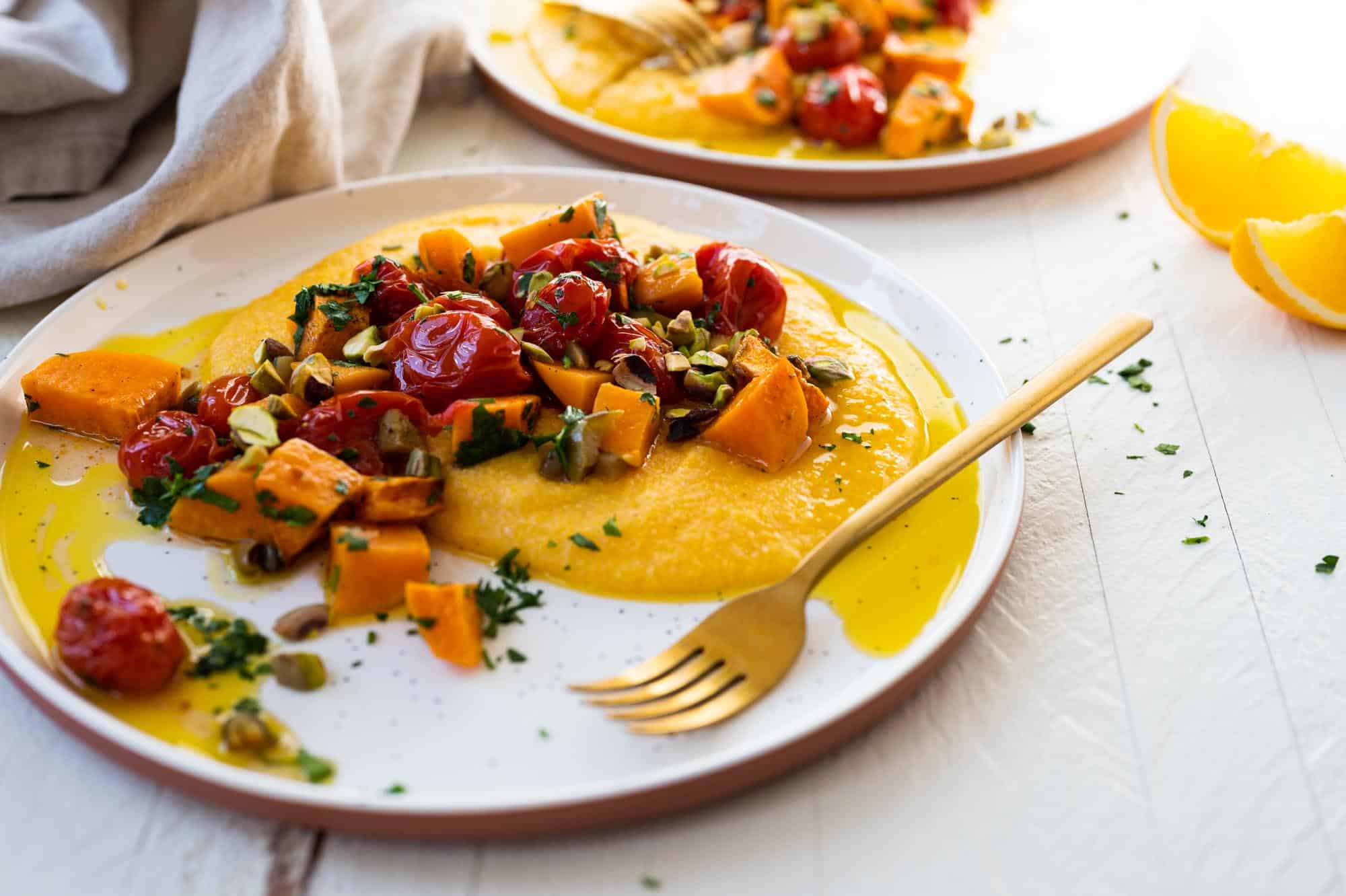 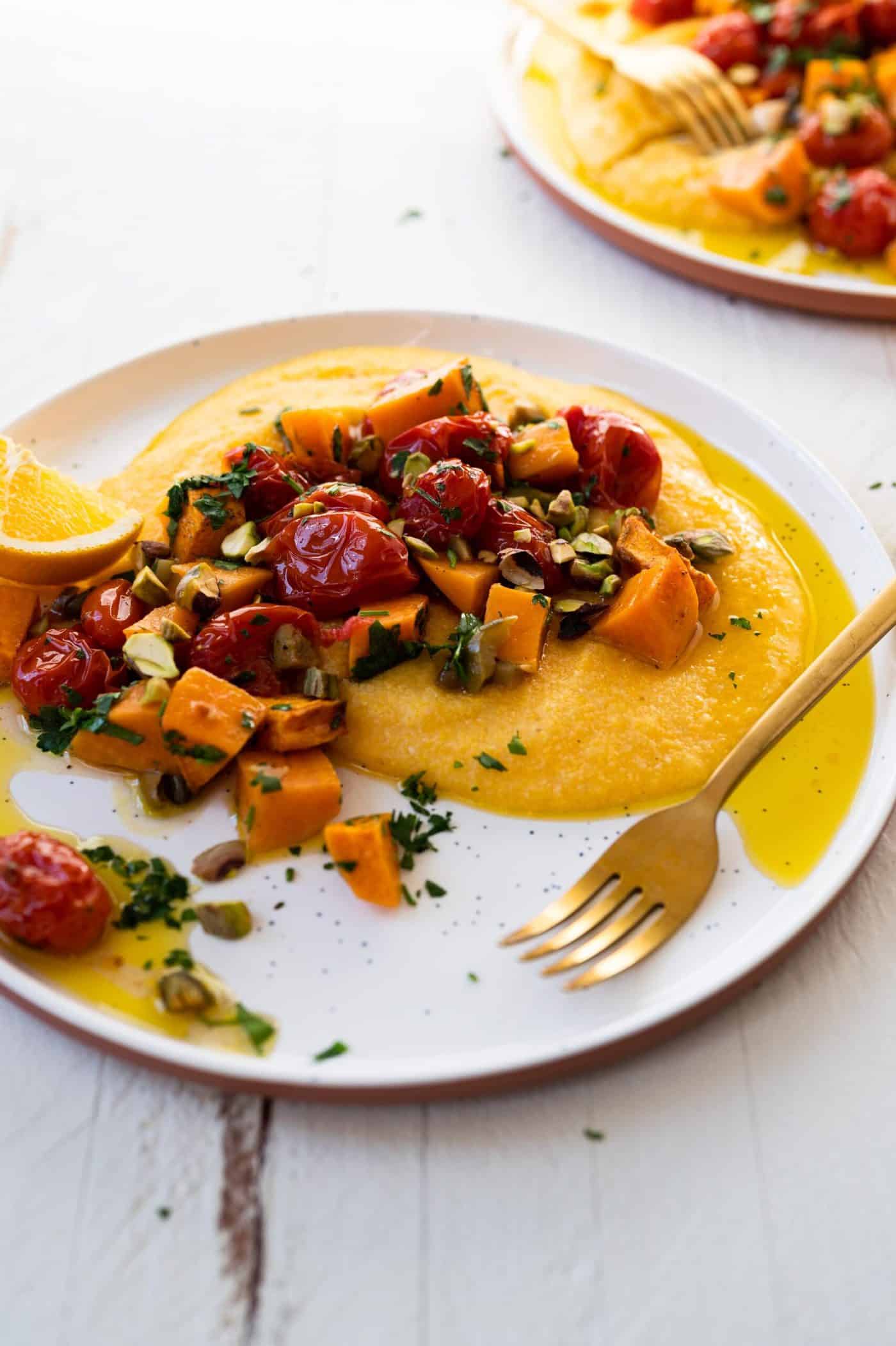 And the bandwagon in this case? TikTok’s viral baked feta pasta.

I had every intention of making the baked feta pasta in all its original glory — and credit should be given here to MacKenzie of Grilled Cheese Social, who lifted it to Instagram and then TikTok fame after being inspired by Finnish blogger Jenni of Liemessä — but I was facing one big obstacle:

I’m the only one in this house who likes feta.

And given the rave reviews this pasta has received and my distinct lack of portion control, that means I’d be sorely tempted to gulp down an entire pan’s worth of creamy, cheesy pasta in a single sitting. Also, there’s that whole attempting to be plant-based thing I’ve been doing for the past few months.

And so, I took the second most intriguing part of the viral feta pasta (after the feta, of course) — the hands-off roasting of jammy tomatoes — and married it with hearty sweet potatoes and a similar hit of mediterranean brininess: green olives and capers. Not so many that you’re like WHOA BRINE. Just enough to impart a little salty tang. 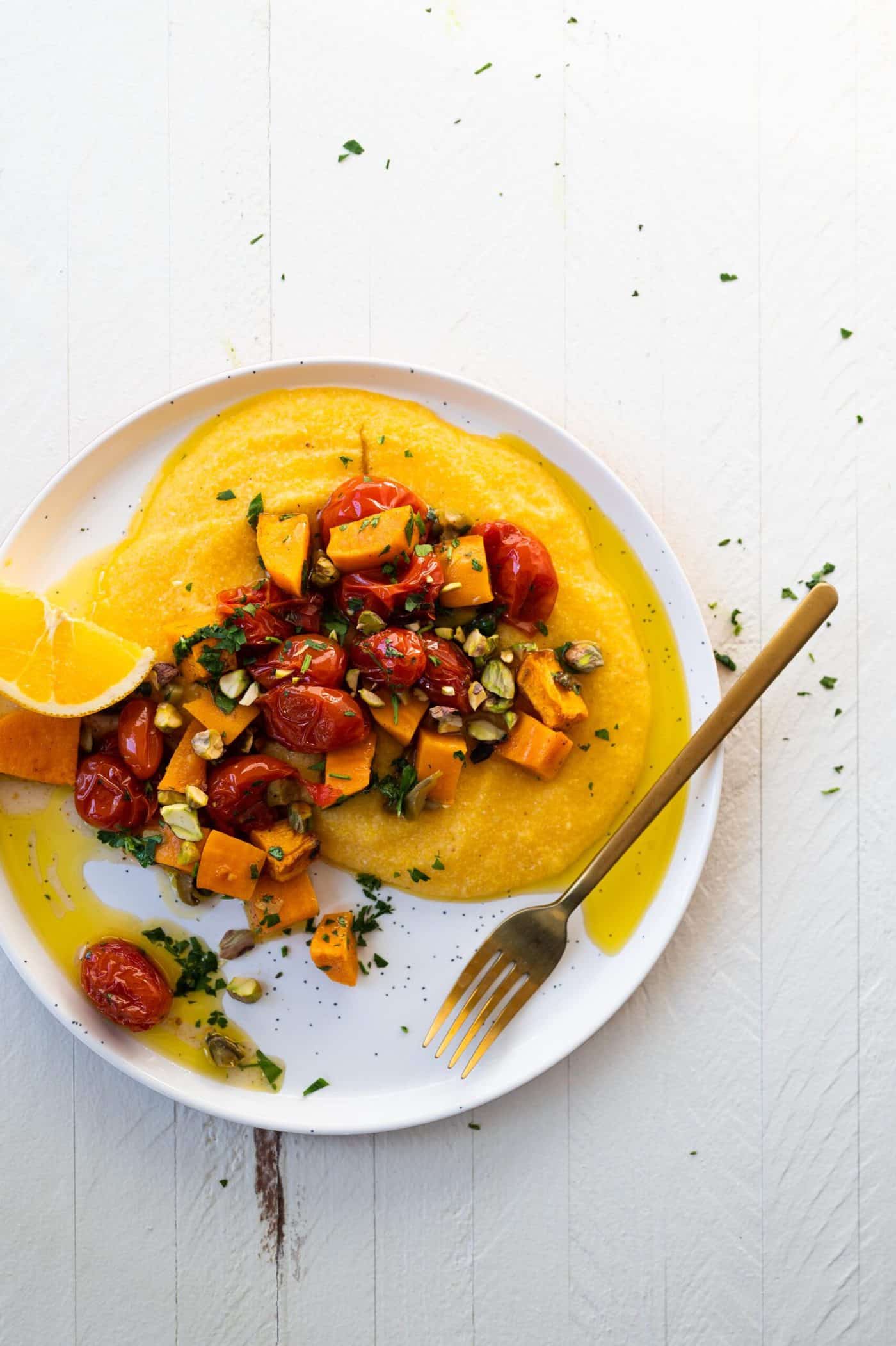 How To Make Vegan Grits – And My Favorite Grits To Cook

And because I have recently discovered and cannot get enough of these Professor Torberts Orange Corn Grits (affiliate link), I made those the base of this simple, vegan sheet pan meal. This isn’t a sponsored post, by the way. I just really love grits, and these happen to be some of the creamiest, most full-flavored grits I’ve tried. They cook up quickly, too, which is perfect for a weeknight meal. For this meal, we’re keeping them vegan by just cooking them with a bit of salt, maaaaybe a knob of plant butter, if you so desire — but honestly, taste the grits first: they’re genuinely flavorful all on their own, and they’ll soon be doused in plenty of tart, salty, olive oily goodness.

You could, of course, use whatever grits you might have on on hand here, or perhaps a little quick cooking polenta, but if your cupboard is bare of grits, I can’t recommend these enough. Bonus that the non-GMO orange corn was selectively grown to be high in carotenoids and was originally developed (by Professor Torbert, no less) as part of an effort to help alleviate vitamin A deficiencies in Sub-Saharan Africa, where Professor Torberts still works to alleviate hidden hunger today. Such a cool initiative, and the resulting product is so very tasty. More about all of that on their website. 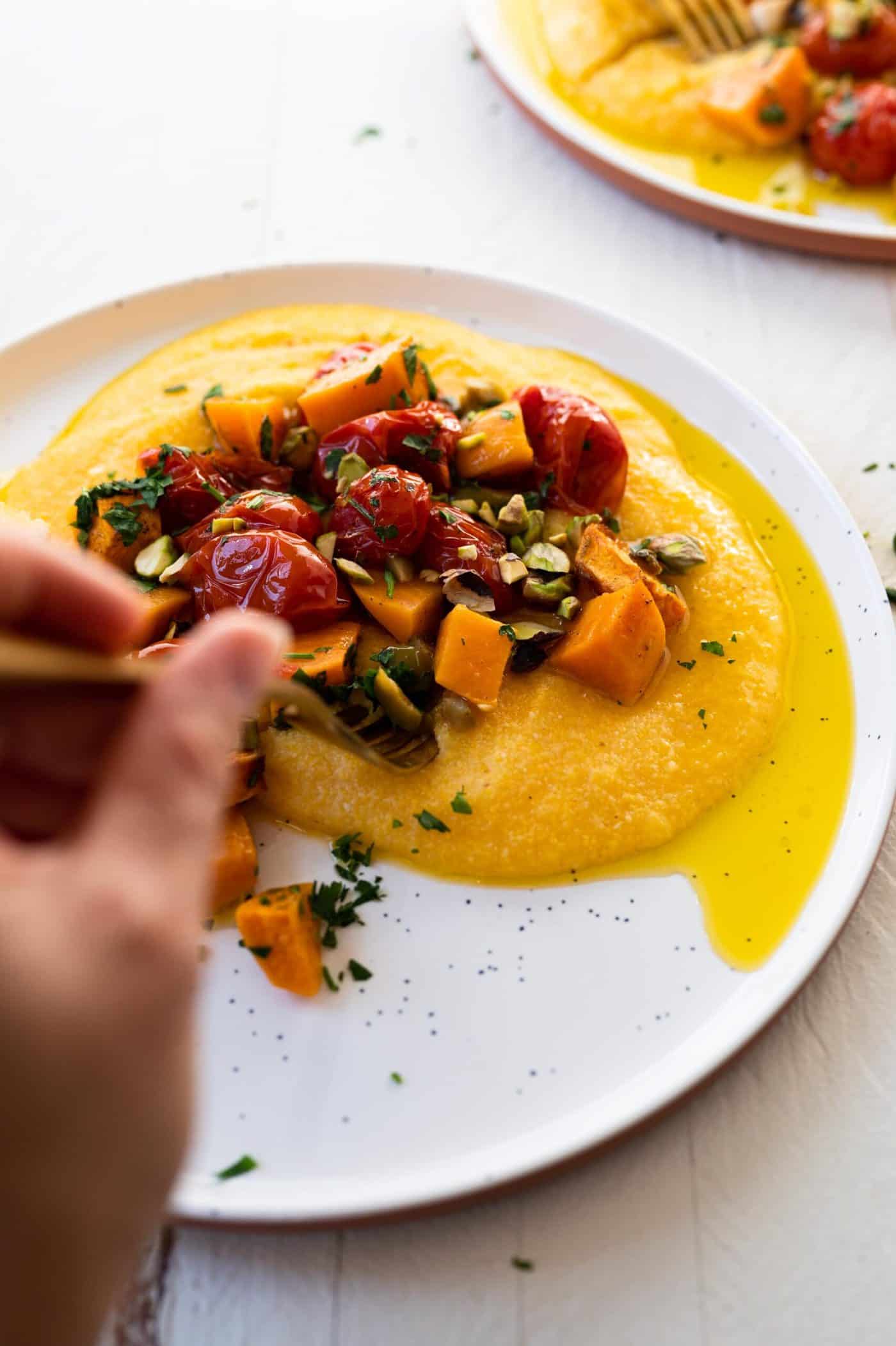 So. How do these Vegan Grits Bowls come together, you ask? Simply! I say.

Into a baking dish go the tomatoes, sweet potatoes (peel them, or don’t — they’re more nutrient-dense if you don’t), lots of olive oil, chopped green olives — more power to you if you can find the kind stuffed with garlic — capers and some good ol’ salt. Despite the fact that we’re calling this a “vegan sheet pan meal,” let’s actually use a dish with higher sides than your average jelly roll pan — you want to crowd the pan just a little so the tomatoes blister and get a bit saucy but they don’t turn into candy on the pan while the potatoes cook through. Let those go for an hour while you check your email, do bathtime, listen to a murder podcast, go down the hole of someday vacation properties on Redfin, fold the laundry, deny the kiddo a show (then consent to a show, but only because it’s Bluey) — whatever. In the last 15 minutes, get your vegan grits on, finely chop a handful of parsley, crush some pistachios, and wedge up an orange. We’re in the home stretch, and you’ve spent hardly 20 minutes, hands-on, making dinner.

Taste the grits for salt and adjust the texture to your liking. I like mine just a little on the thin side so they pool nicely on the plate now; they’ll set up a bit as they sit, too. Spoon them onto the plate, squeeze the orange right over the veggies and pile them up over the top. Scatter the whole lot with the fresh parsley, the nuts, and — if you’re feeling fancy — Microplane a little of that orange’s zest over the top, too.

There you have it, folks. Vegan Grits Bowls with Roasted Sweet Potatoes and Tomatoes that, it turns out, are actually quite a departure from the viral feta pasta thing — but no less delicious. 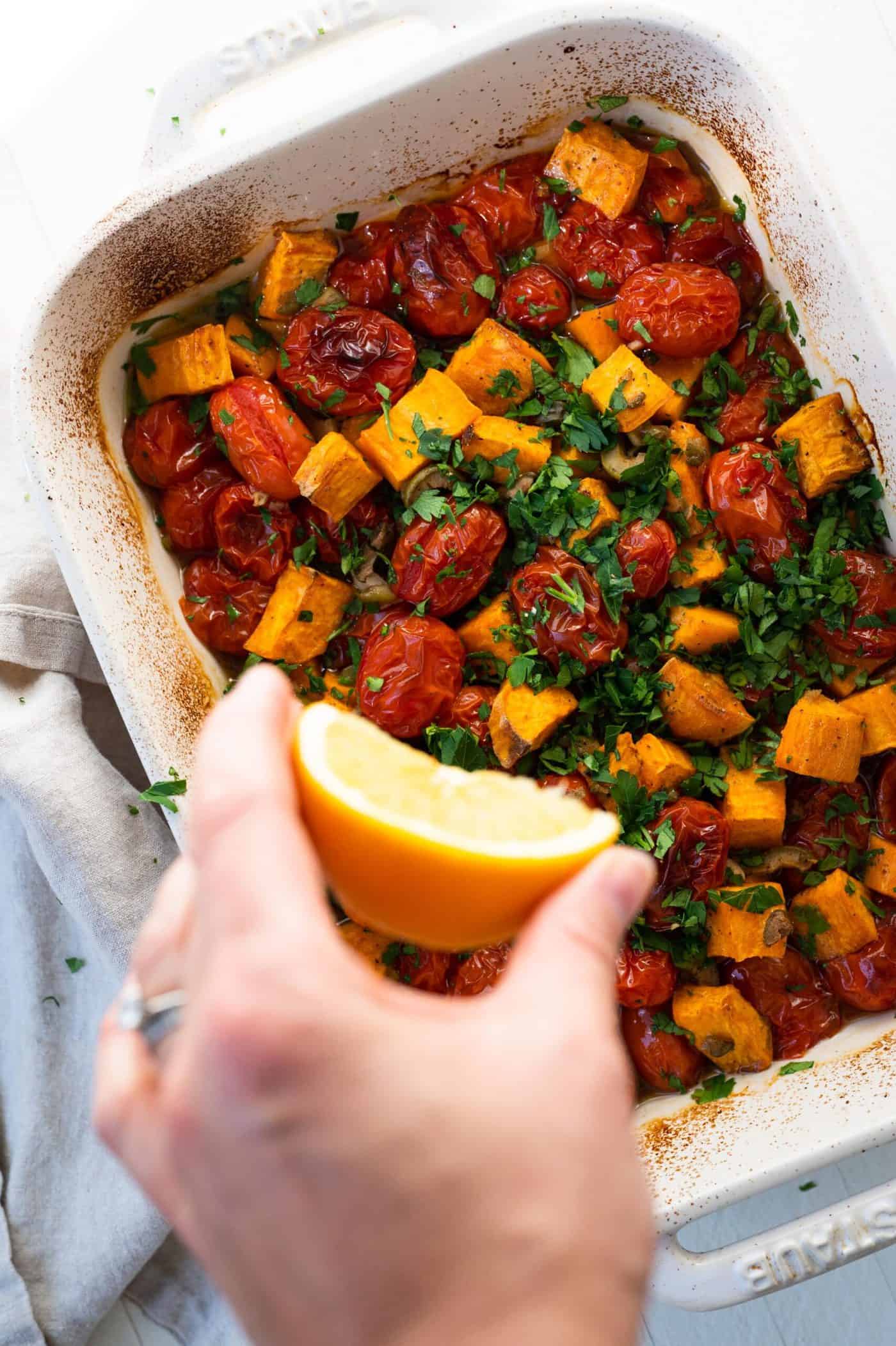 Trying to make these Vegan Grits Bowls TONIGHT but don’t have everything for the recipe? Picky kiddos? Food allergies? I got you. 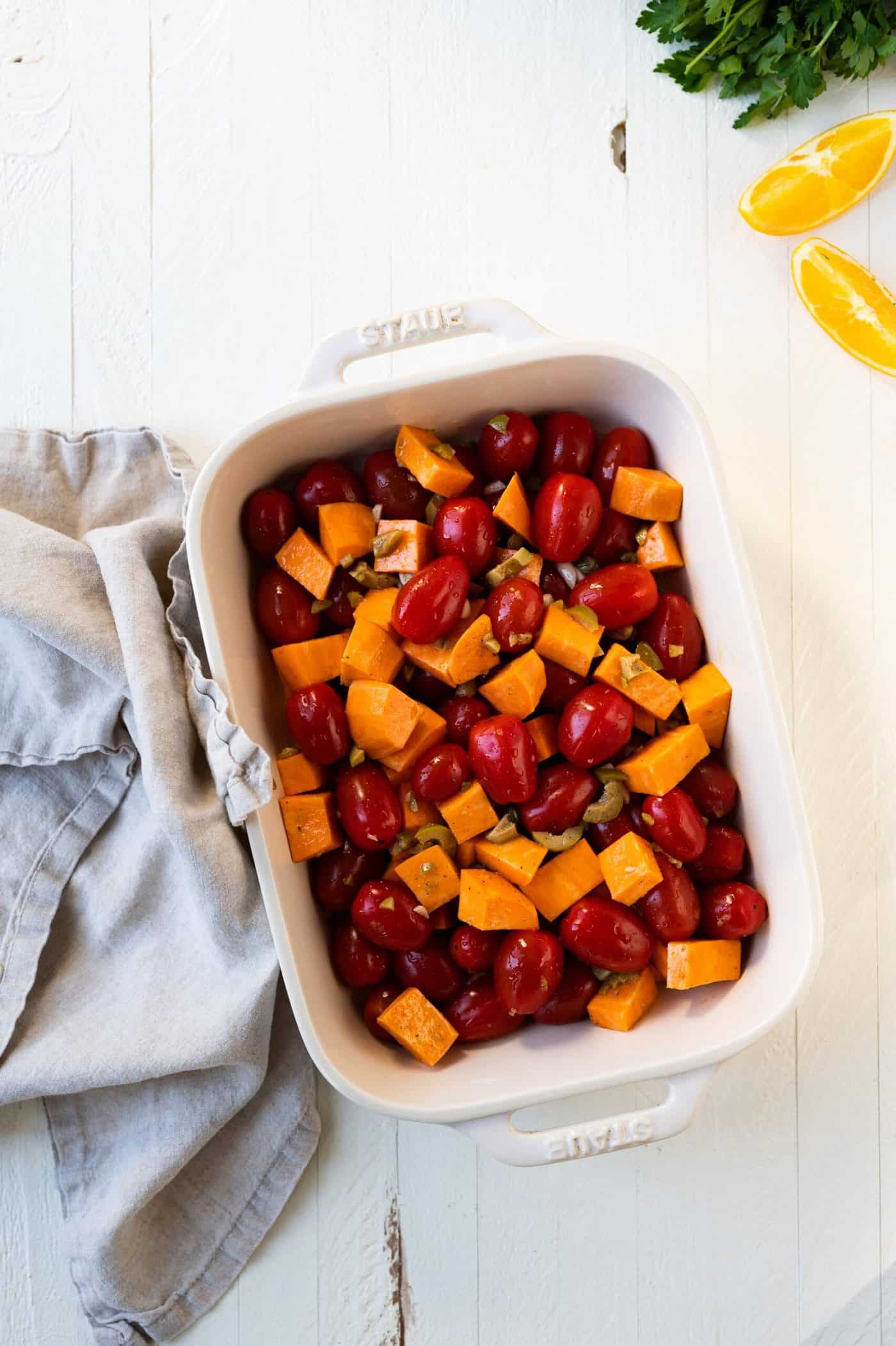 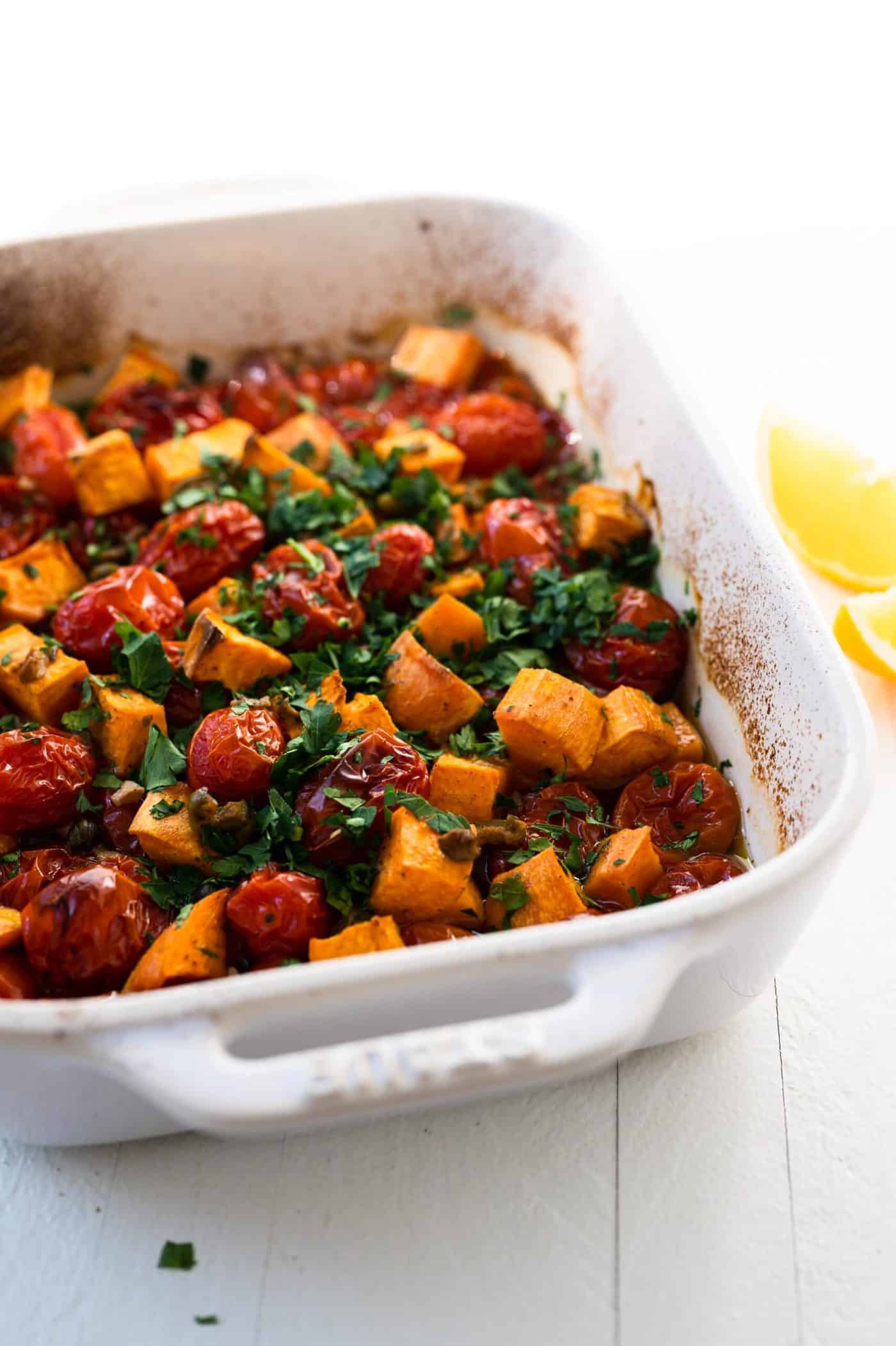 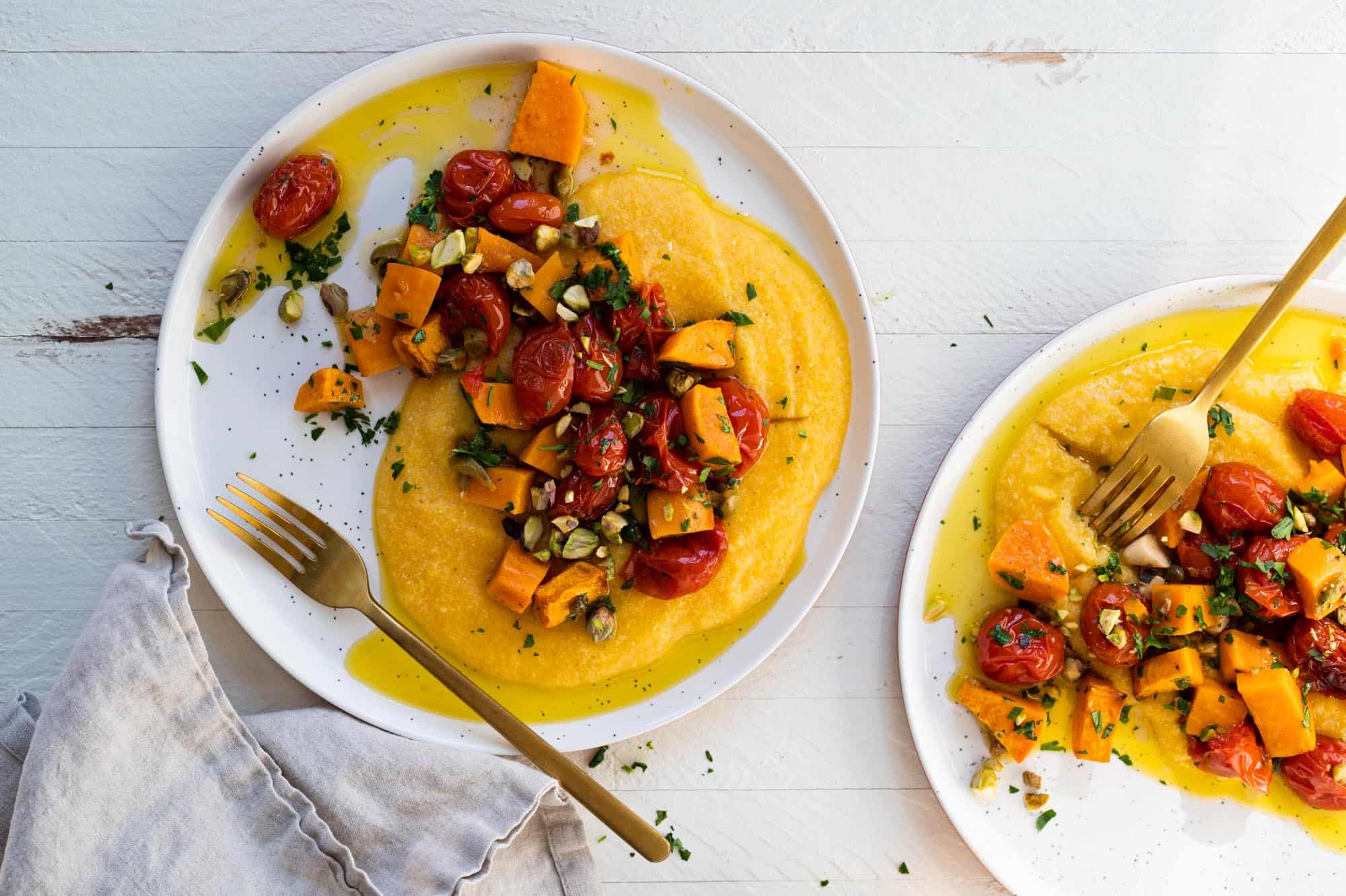 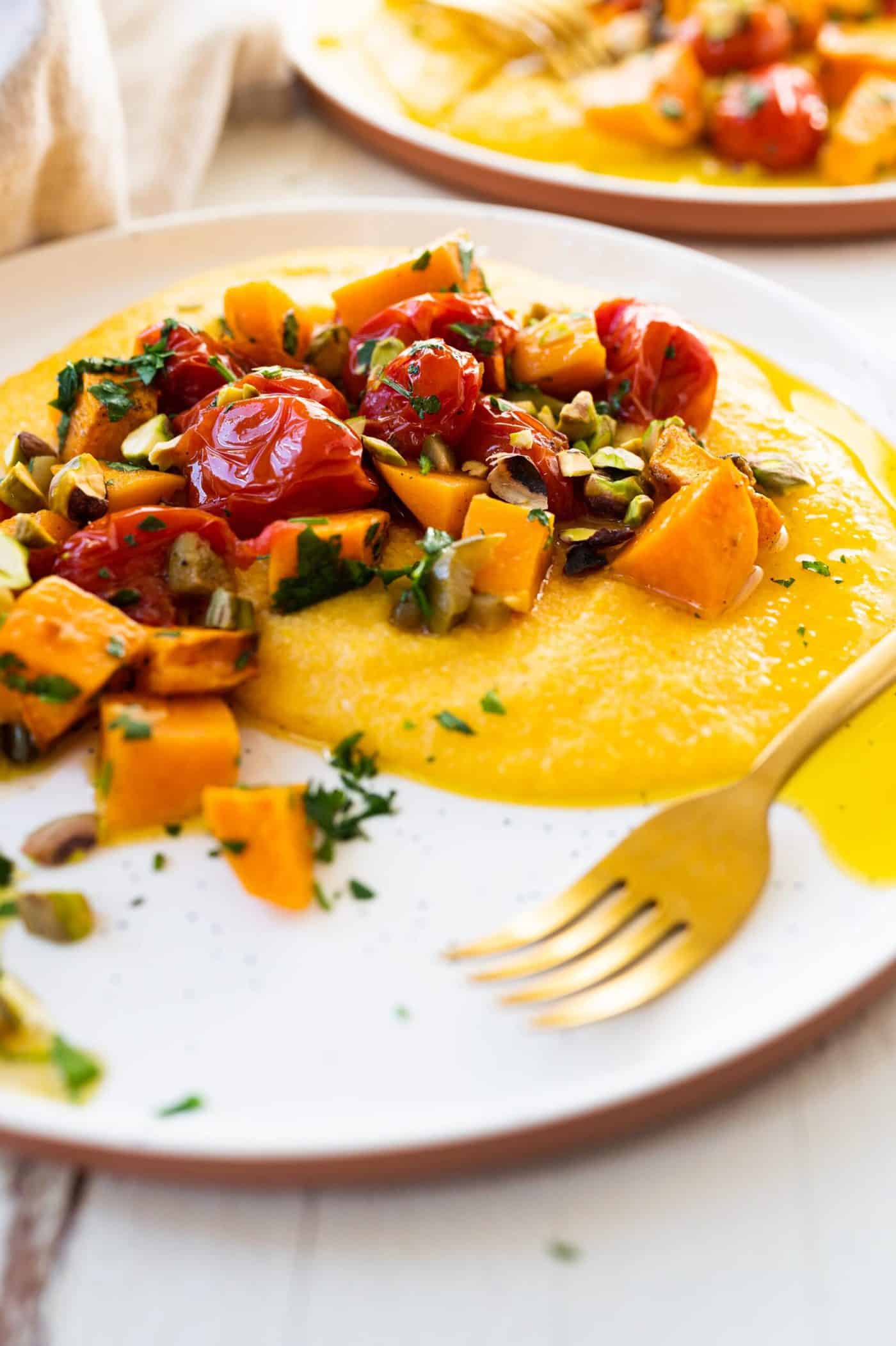 Like the sound of these Vegan Grits Bowls with Roasted Sweet Potatoes and Tomatoes?

I legitimately can’t get enough of these bowls, pals — or these grits. Give ’em a whirl and let me know what you think, eh? They might not be the next TikTok sensation, but I can tell you they make some seriously tasty eats.