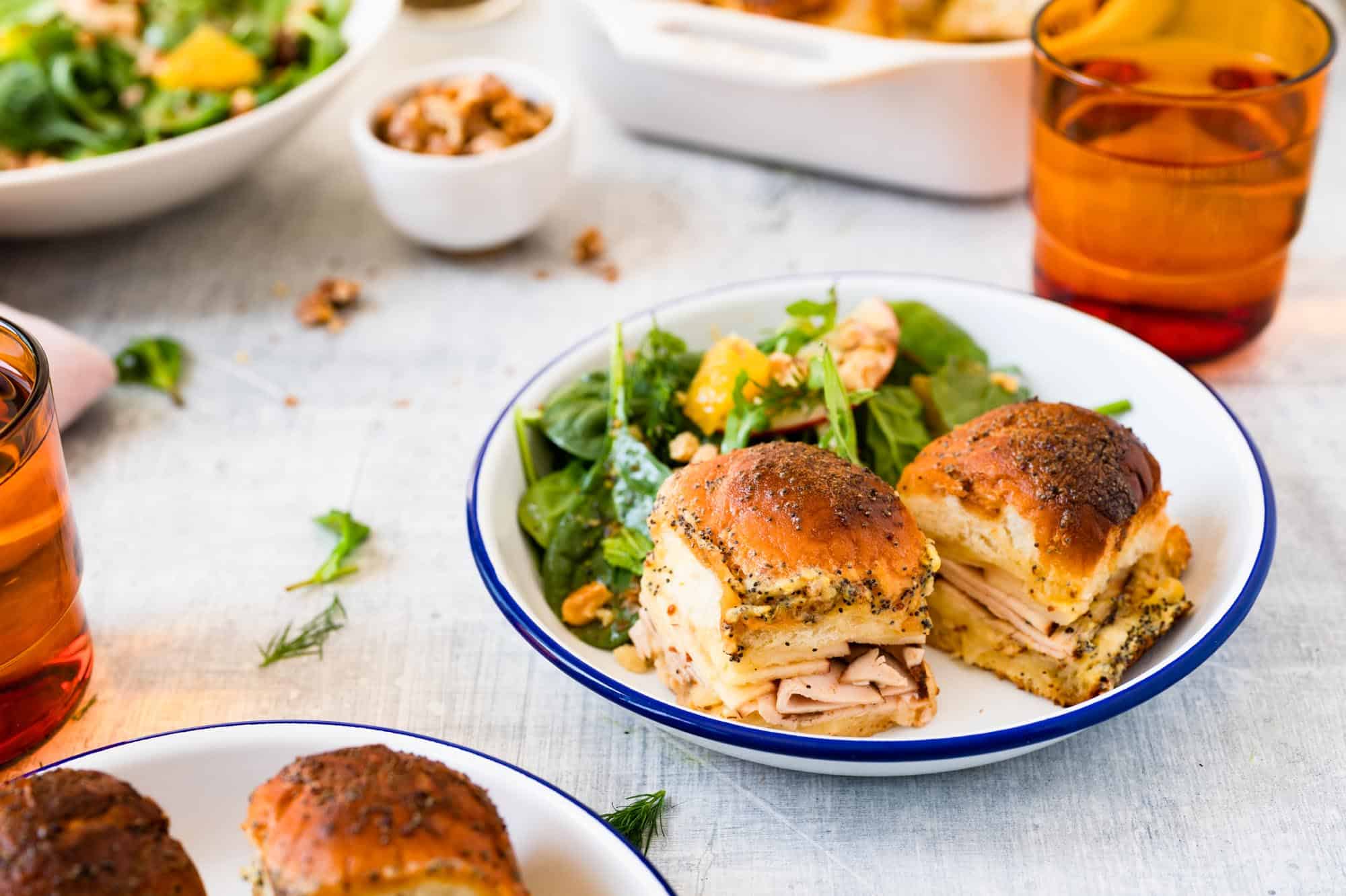 Baked Cheddar, Apple & Smoked Turkey Sliders — these easy baked sliders come together quickly and are perfect for a spring brunch or lunch. Pair them with a bistro-inspired Springy Herb Salad dressed with a sweet and tangy Orange Poppy Seed Vinaigrette for a complete family-friendly meal. 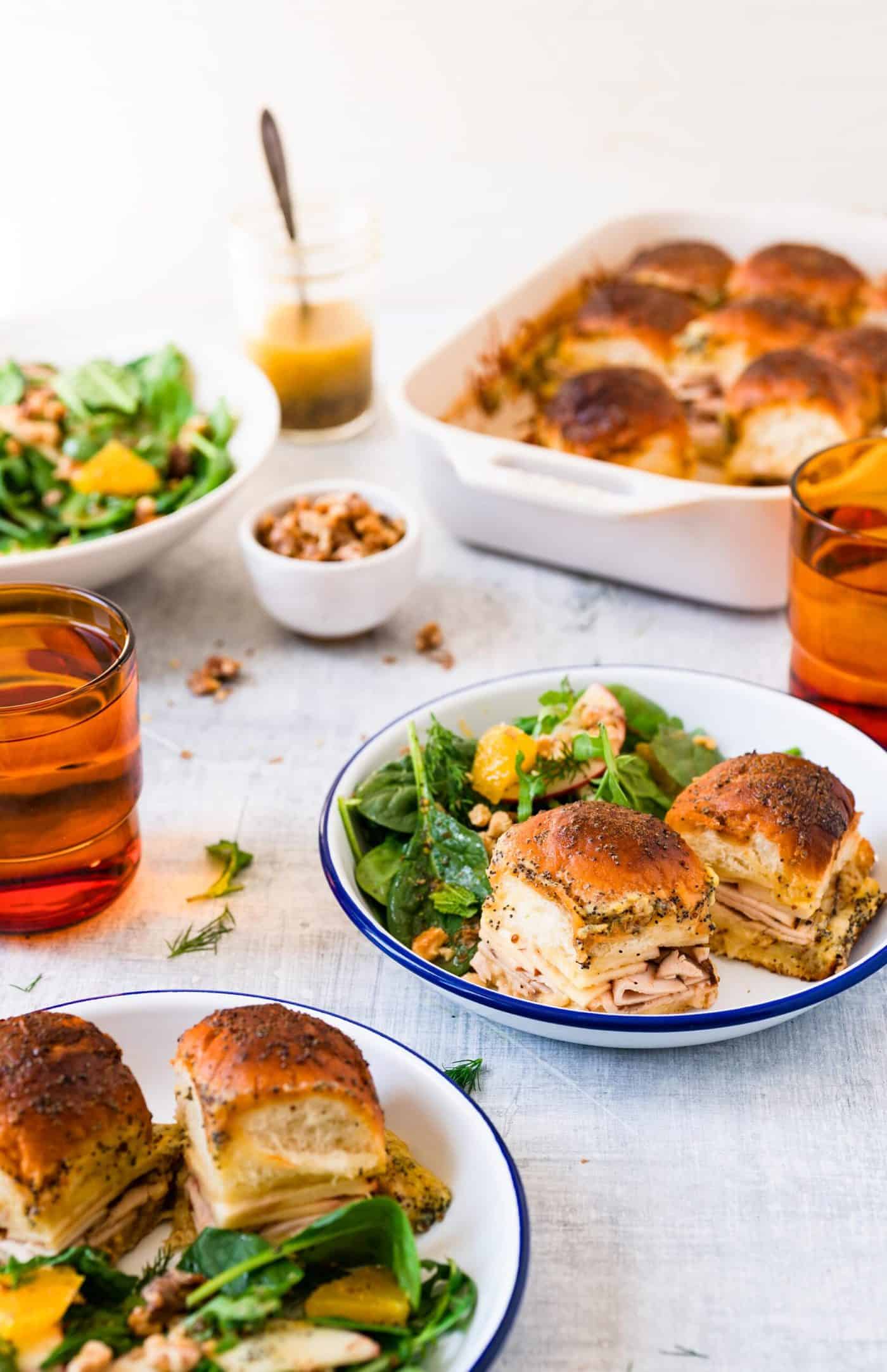 This post has been sponsored by Safeway. All thoughts and opinions are my own.

I love everything about a baked slider. The ease with which they come together. The melty filling, sandwiched between buttery, toasty rolls — crisply topped and nutty brown from the oven. In typical years, they’re a favorite party food, but this past year, they’ve become a favorite weeknight meal, as well. And these Baked Cheddar, Apple & Smoked Turkey sliders, made with easy-to-find ingredients from Safeway stores as part of our ongoing seasonal partnership, are no exception.

Once you know the method for making baked sliders, you can doctor them up a myriad of ways. Our go-to, which we’ve talked about before, is usually a riff on a spicy Monte Cristo sandwich, featuring turkey and ham, two cheeses, pickled jalapenos and a dusting of powdered sugar — and friends, they are some of the best tasting things I’ve ever sampled. But in an attempt to streamline things just a little — and spring-ify them a bit — we’ve paired these down to just a handful of seriously delicious ingredients that we almost always have around: O Organics shredded white cheddar (it’s our go-to for quesadillas, so we always have it on hand); tangy honey dijon mustard; crisp slices of sweet, refreshing JazzTM apples; and deli-sliced Boar’s Head PitCraftTM Slow Smoked Turkey — the latter two of which are totally the stars here. 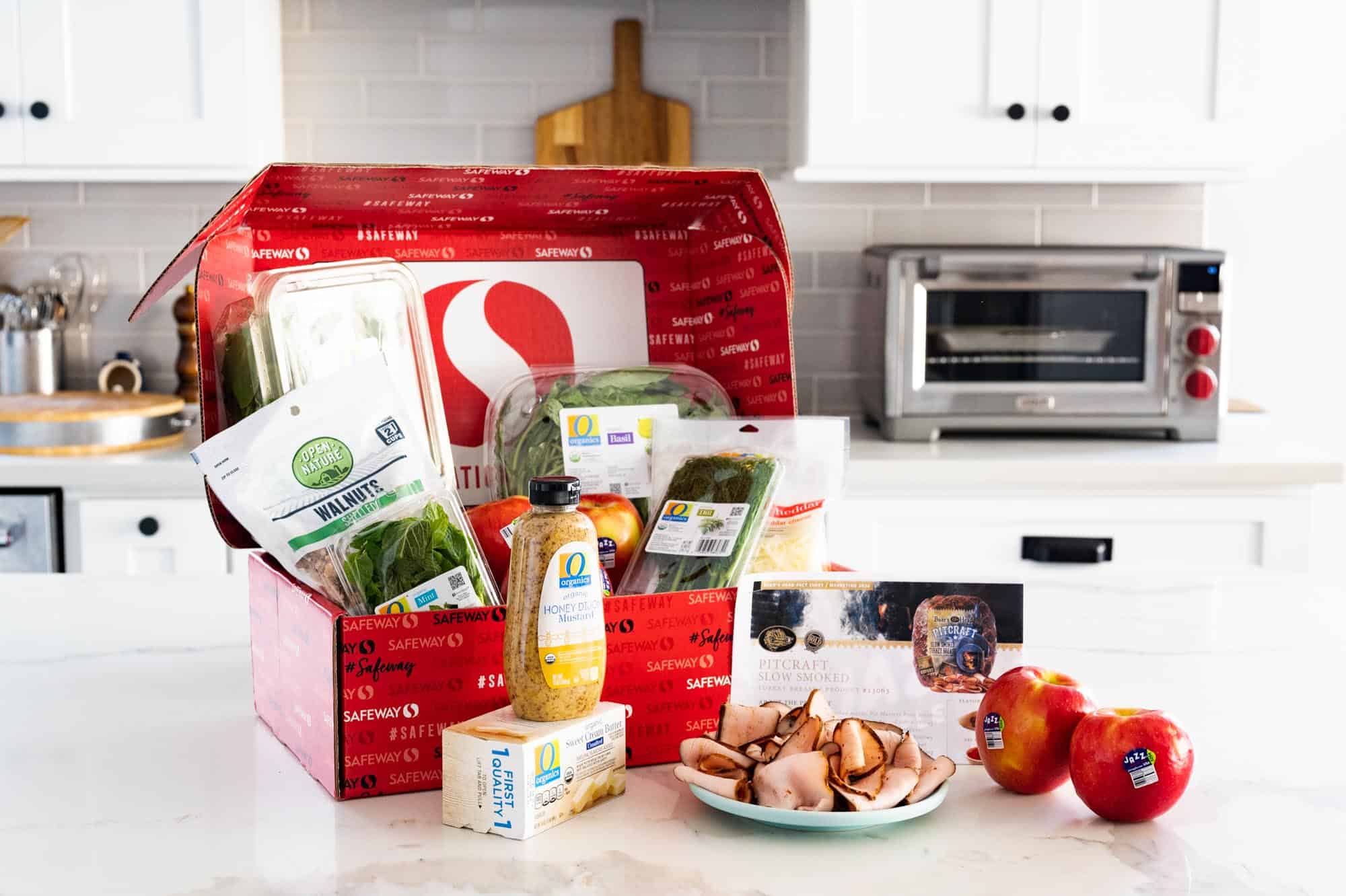 What Is A JazzTM Apple?

We’re very familiar with JazzTM apples in this house. A fusion between a Royal Gala and a Braeburn apple, they’re just the right size for snacking, and their sweet-tangy flavor and juicy crunch makes them so refreshing. We like eating them super cold out of the fridge, but turns out they hold up beautifully in this baked sliders recipe, too, retaining a little crunch and adding a delicate sweetness to the little sandwiches. Apple and cheddar is as classic a combo as they come, and JazzTM apples were the perfect choice for the pairing in these sliders. 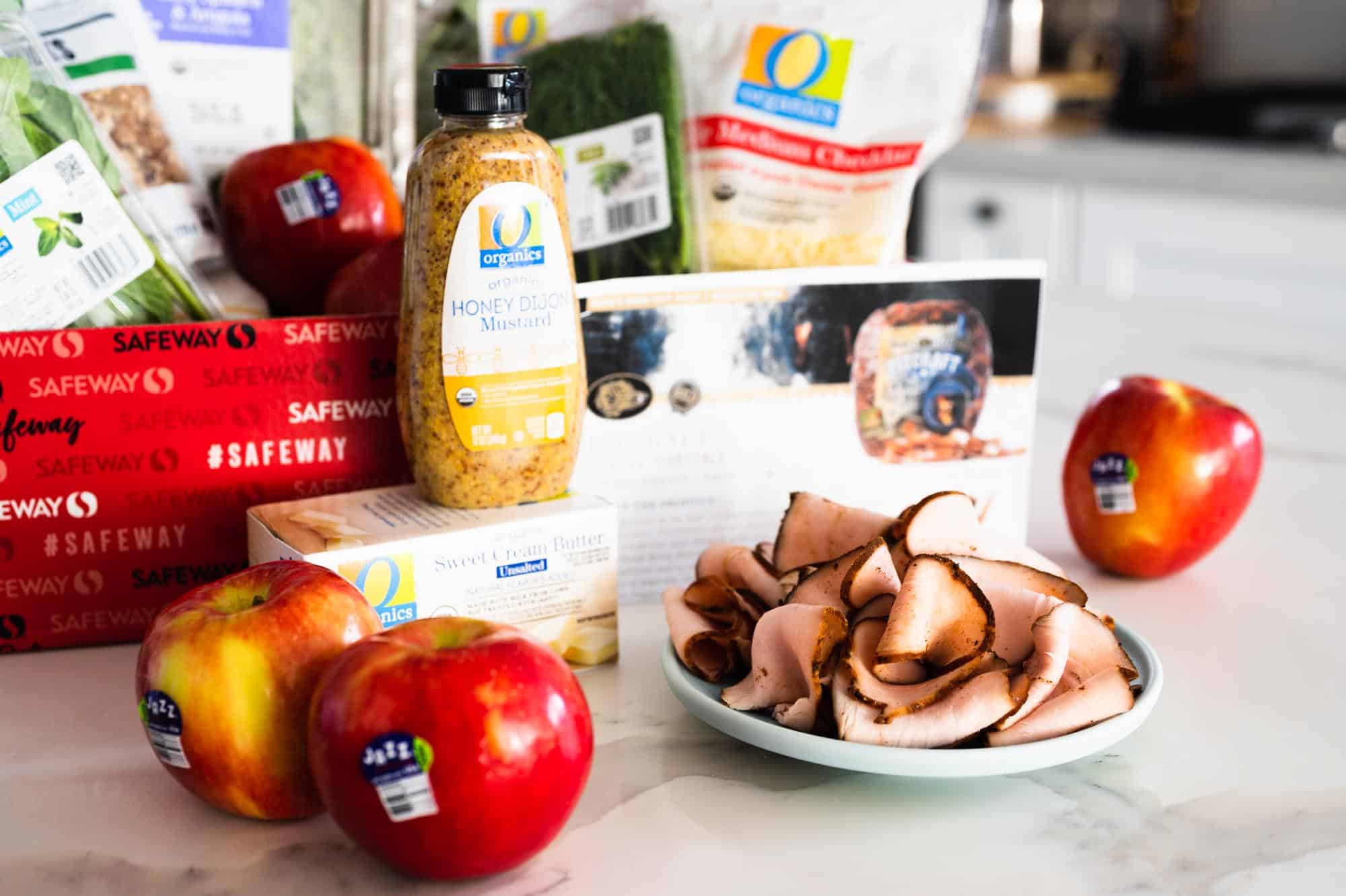 And as for the Boar’s Head PitCraftTM Slow Smoked Turkey — well, confession time. Since this is a hand-sliced product from the deli counter, I set foot in my local Safeway for the first time in many months. Typically we rely on Safeway’s drive-up or delivery services, so I was actually a little anxious entering the store for the first time (apparently, the pandemic has turned me into a bit of a socially defunct hermit), but after sampling this turkey? So totally worth it. It’s slow smoked with mesquite wood chips and seasoned with an authentic dry rub with paprika, brown sugar, and Mexican chilies. And it’s delicious. Literally the best deli turkey I’ve had. Mouthwatering and incredibly savory, with a light smokiness and the texture of a home-cooked turkey breast. I found myself snacking on it while I took these photos and again when I assembled the sandwiches. Even Lana (age 5), who is typically not that into deli meat, kept poaching pieces off the plate. It’ll be part of the regular grocery rotation from here on out. 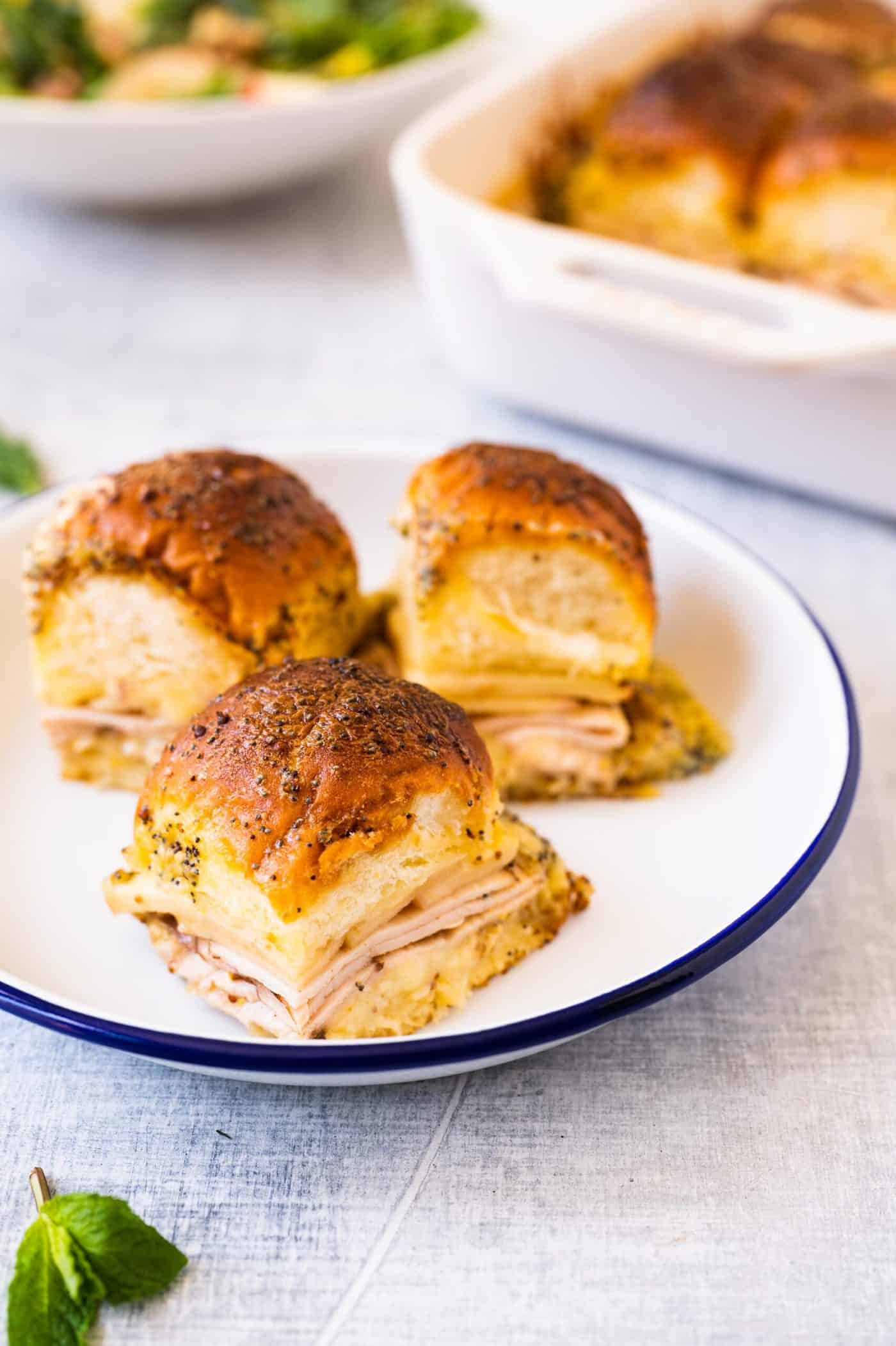 How To Make Baked Sliders

No matter what ingredients you’re using, the method for baked sliders is the same: split a sheet of dinner rolls or Hawaiian rolls through the middle, keeping the sheet intact. Set the bottom half into a greased baking dish, and pile it up with your favorite ingredients (cheese is usually involved in this step, which ensures a properly decadent, melty slider — highly recommended). Once the top half of the rolls are set back on top, the whole shebang is drenched with seasoned melted butter before being baked until golden brown and gooey. Best of all, most baked sliders — these Baked Cheddar, Apple & Smoked Turkey Sliders, included — come together with about 10 minutes of hands-on time, making them an excellent last-min brunch or weeknight supper. Especially paired with a zippy, bistro-inspired salad.

How To Make Restaurant Salads At Home

I’m always hesitant to order salad in a restaurant, and that’s because after years of making A LOT of salads, Chris and I can throw together a pretty legit, bistro-inspired salad at home with little-to-no planning. I like my salads to be generously topped, with lots of varied textures and flavors — bright, bitter, tart, salty, tangy, nutty, sweet. I want it all, pals. And this Spring Herb Salad with Orange Poppy Seed Dressing delivers. I’m convinced it’s almost solely due to the generous inclusion of herbs. Something about the refreshing combo of mint, basil and dill (we used O Organics packaged fresh herbs) makes even the simplest of accompaniments feel far fancier than the ingredient list would lead you to believe. More of those exceptionally crisp Jazz apples lend sweet-tart juiciness. And that dressing? It’s tangy, sweet, fruity and…discernibly poppy-seedy? (No, seriously — the taste and texture of the seeds don’t seem particularly notable, but you would miss them if they were gone.) It’s worth making a double batch and using it to dress any of your favorite salads all week long — and it’d be ideal tossed with a simple mixture of chopped romaine, grated carrots, sliced scallions and shredded chicken for a simplified version of an Asian Chicken Salad. 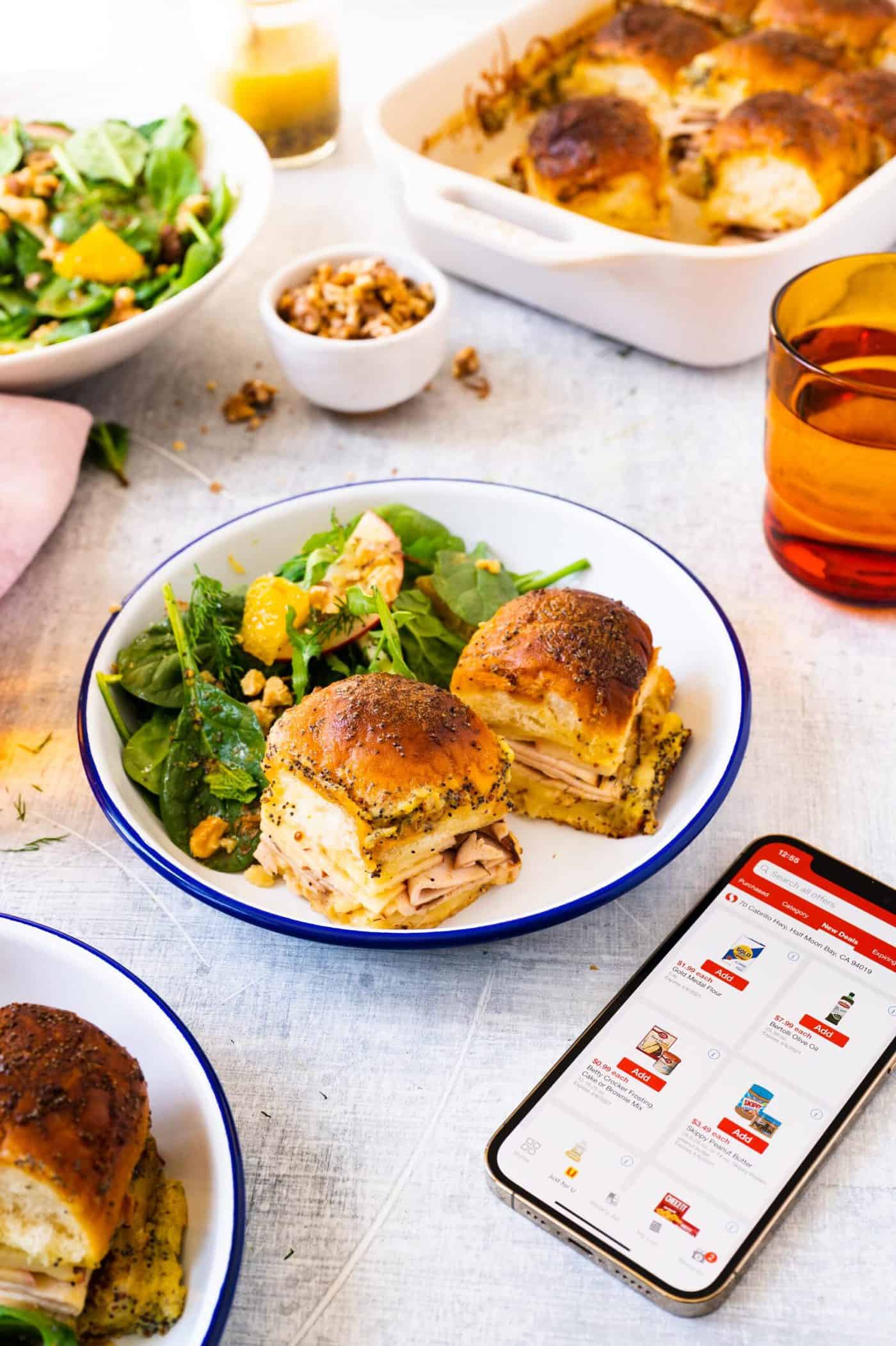 And that’s that, friends. An easy-to-make meal that feels special occasion-worthy, delightfully springy, and evocative of something you might find in a bistro — all with seriously minimal effort.

Hope you enjoy these Baked Cheddar, Apple & Smoked Turkey Sliders and Springy Herb Salad with Orange Poppy Seed Dressing recipes as much as we do! 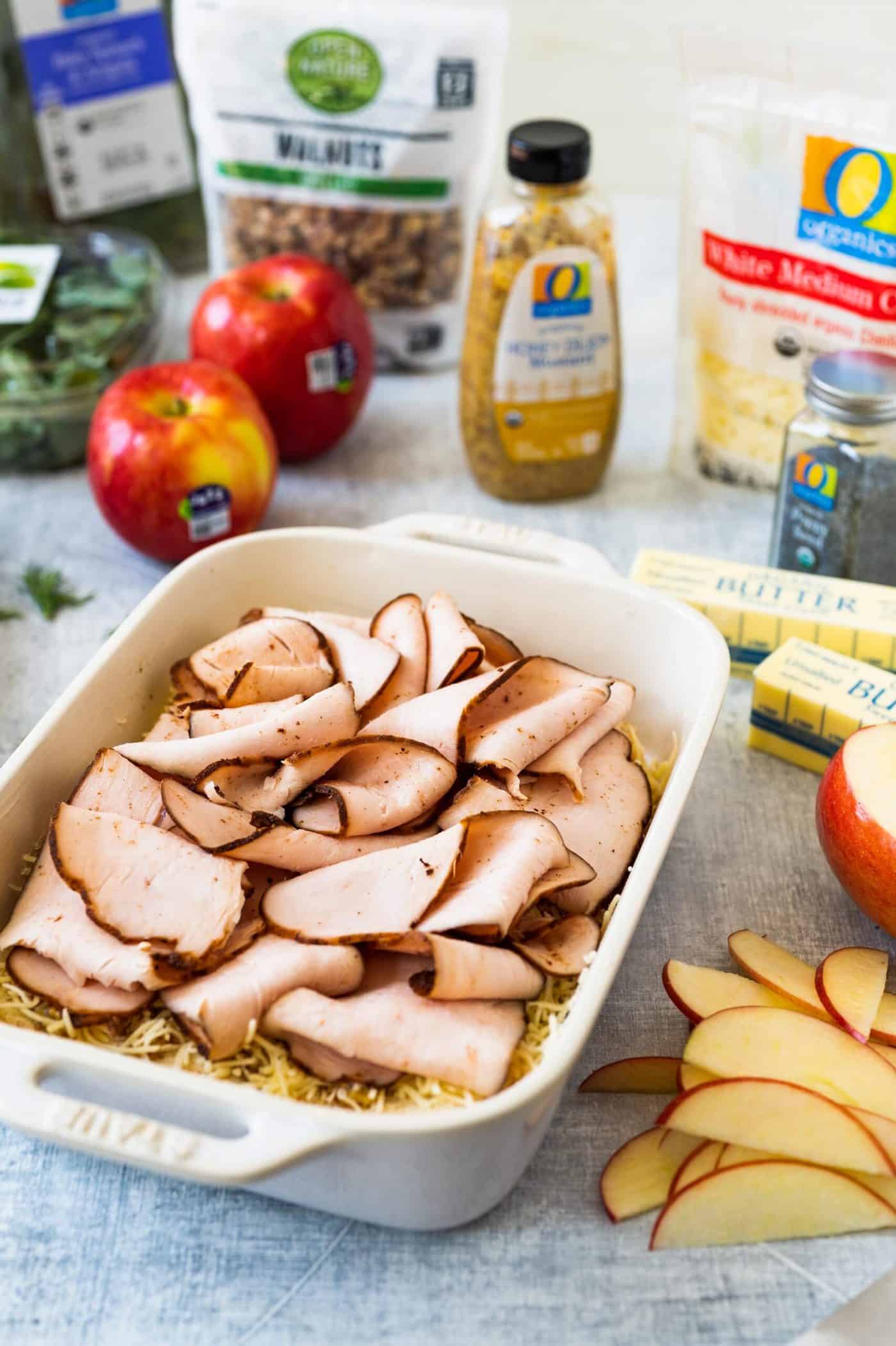 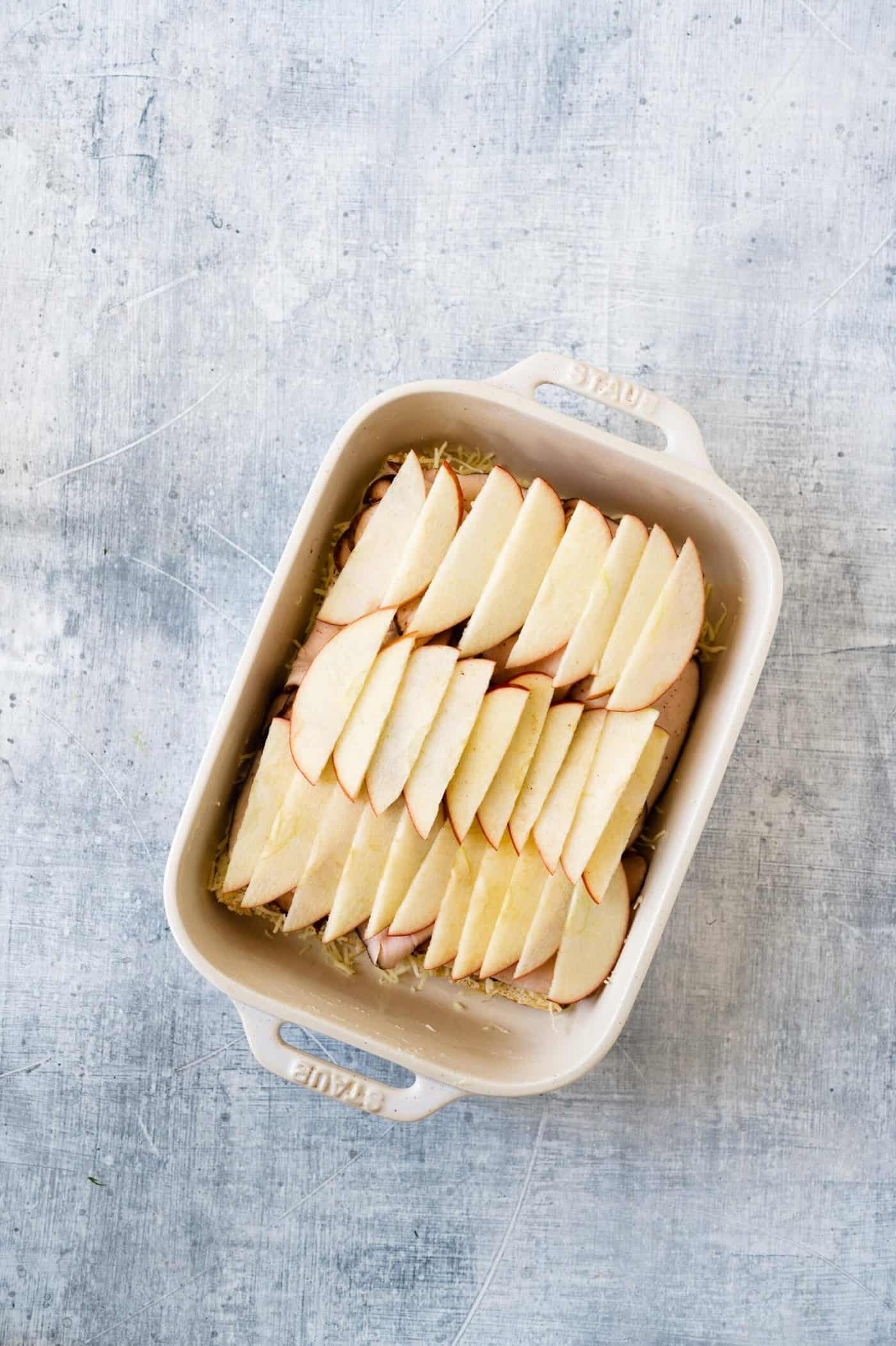 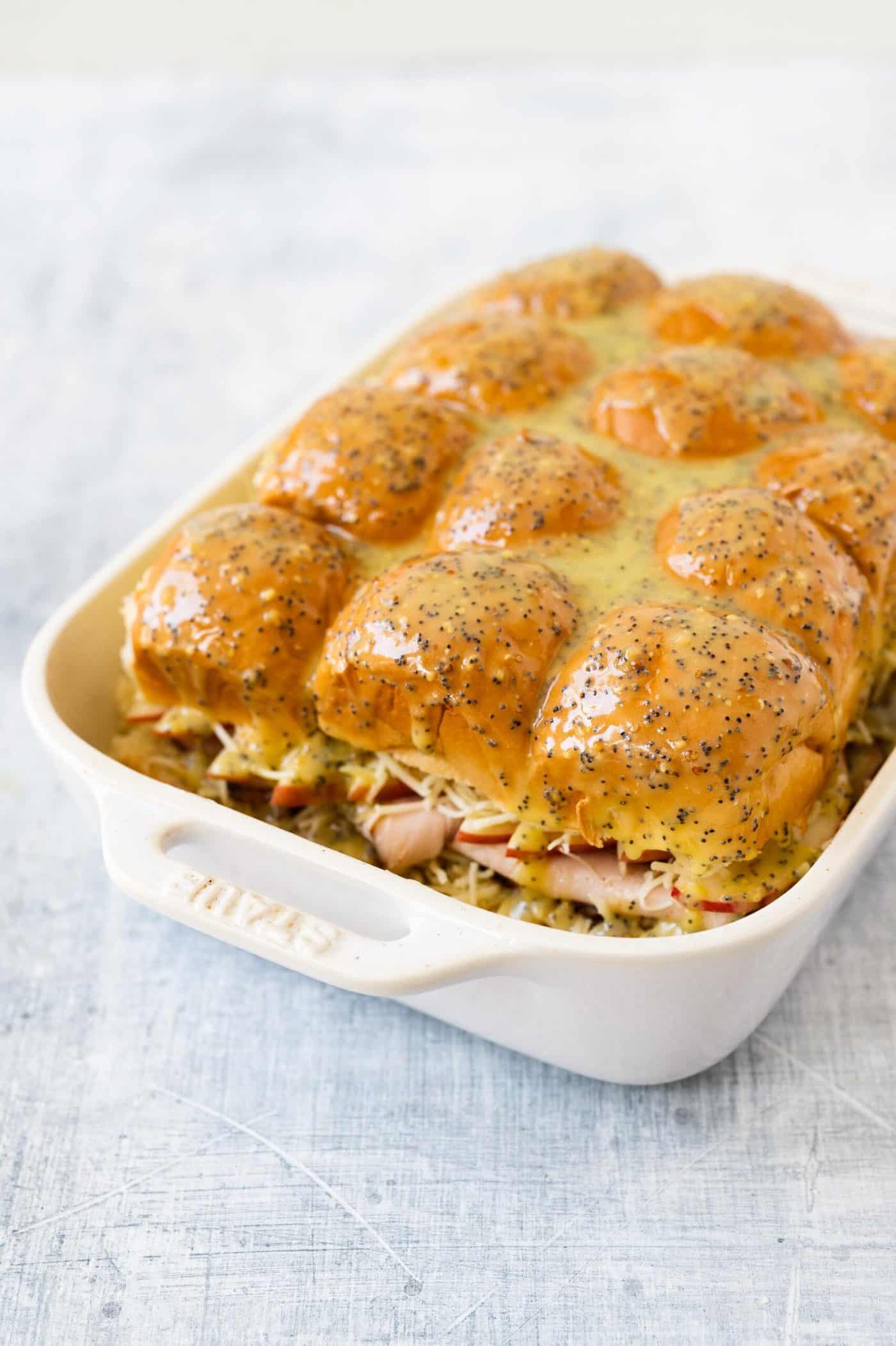 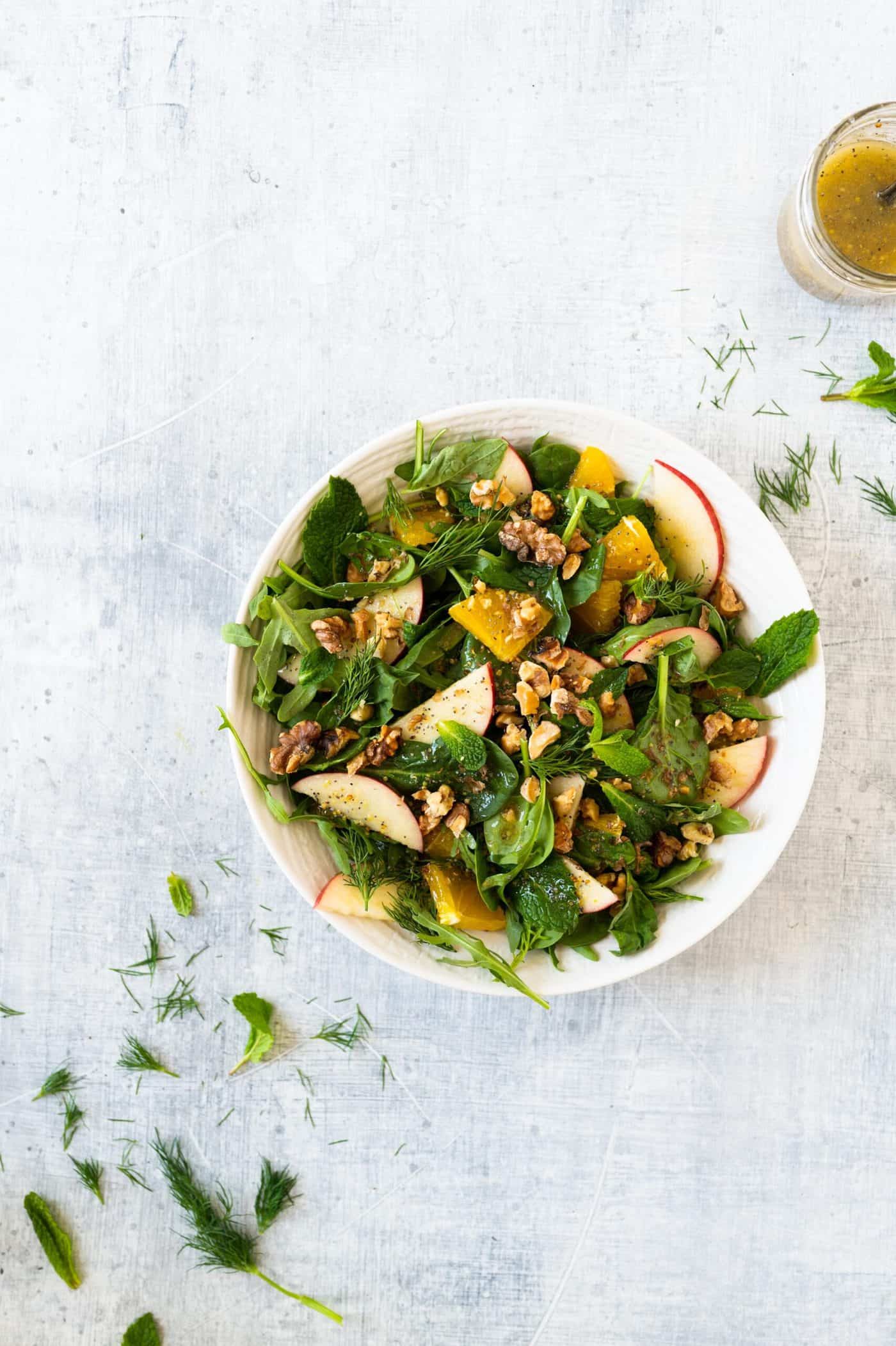 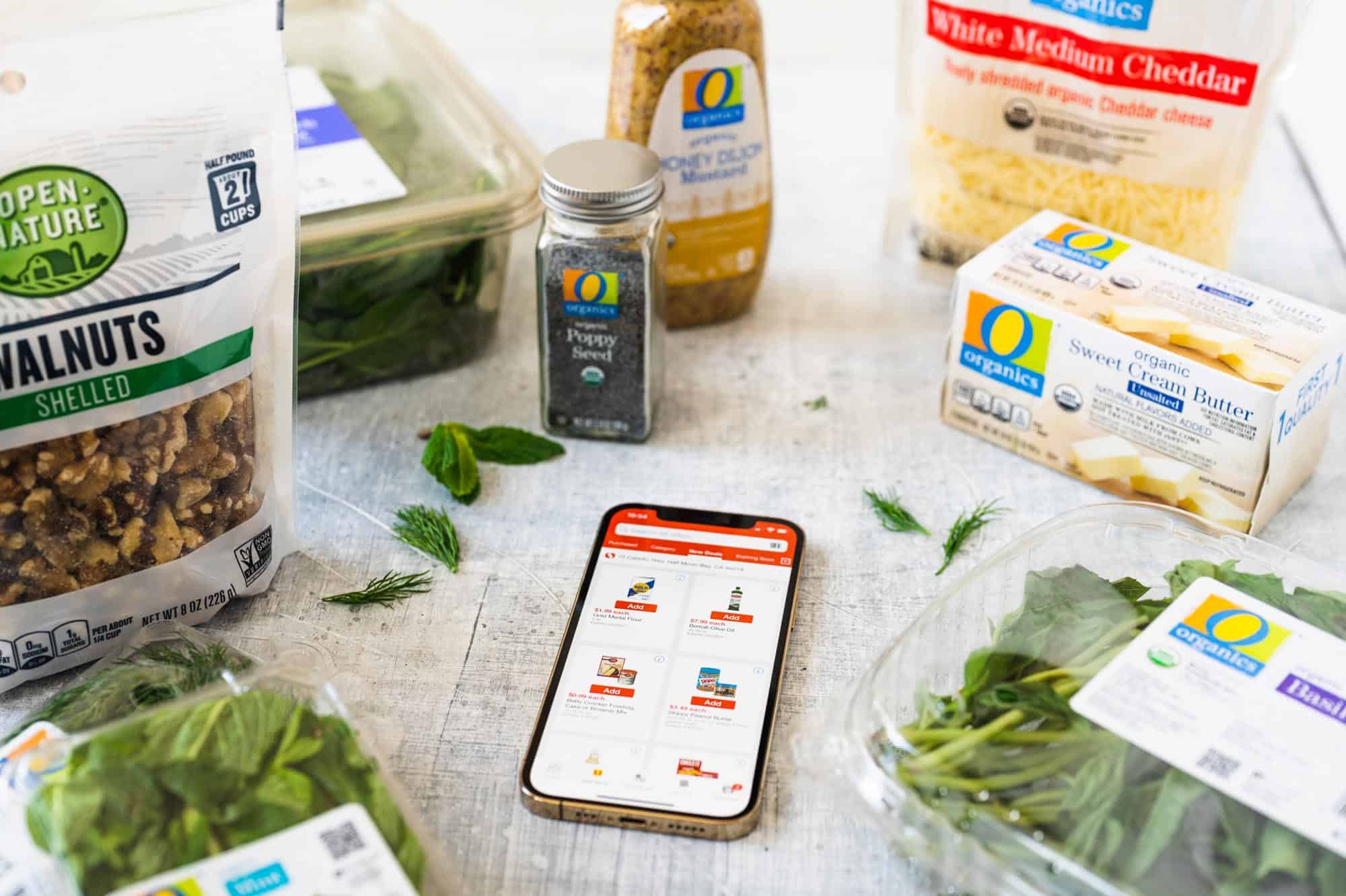 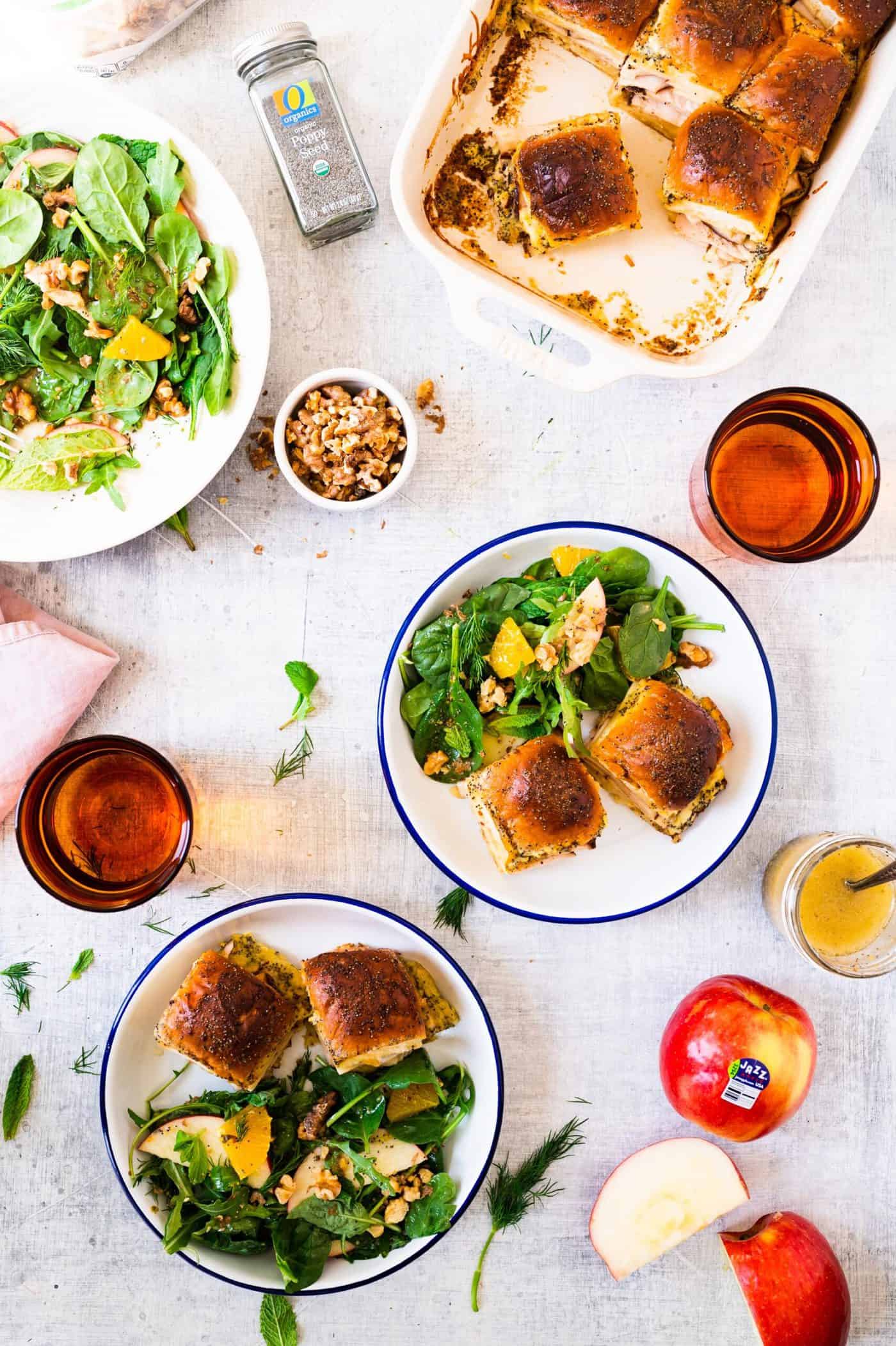 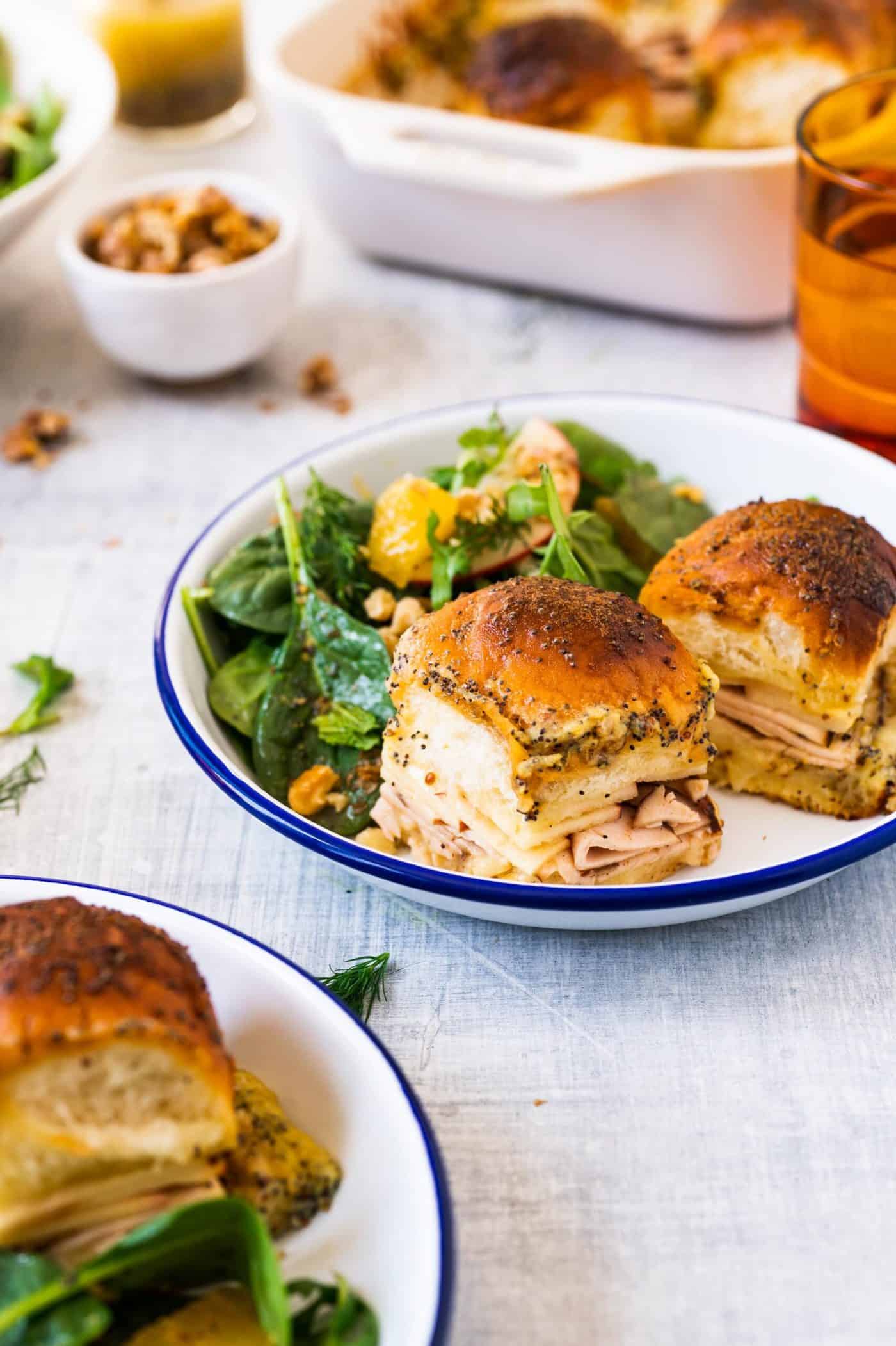 Like the sound of these Baked Cheddar, Apple + Smoked Turkey Sliders?