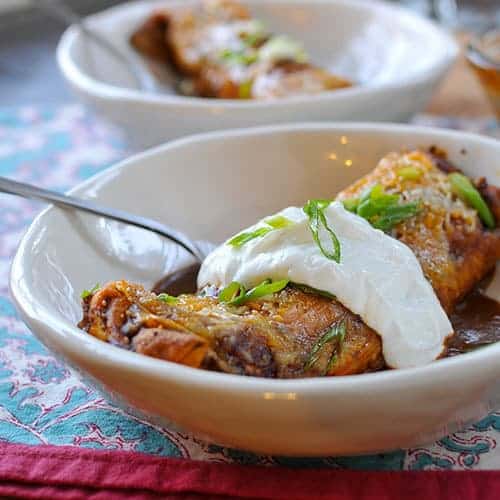 As we really tuck into this ‘ere eleventh month in 2013, I thought now might be a decent time to start recounting the foodie resolutions I made way back in January. You know, back before middle aging, bi-coastal smorgasbording and pumpkin hoarding became the norm. In that rare moment of calm and restraint when I used the word “totes,” like, maybe once every other post.

Or, you know, before the wheels fell completely off and we found ourselves tobogganing through this very metaphor.

And how’m I doing?

You guuuuyyyyyssssssss, I am suuur tuuurtally killing it! I mean, all things in moderation, but would you believe that I’ve had exactly two sodas this year (all-natural root beer, thankyouverymuch) and zero diet drinks? Not too shabshab, wouldn’t you saysay?

But the element that’s had maybe the greatest impact on how we plan our meals in this little house is our avoidance of conventionally farmed meats, which is why we’ve redesigned our diets to include about a billion percent more veggies, whole grains and legumes and modest portions of sustainable seafood; organic, grass-fed beef;  organic, free-range poultry; AND…bison.

So when I learned that one of my ski buddies was helping to launch Bison Bison Co. — a local, Bay Area-based company that’s literally bringing healthy, sustainable, deereeshus bison to your door — I was like, lay it on me, Rob. And then I was like, holy snap, this is some tasty buff. And then I was like, Less grillus some burgers! Less makeus some meatballs!

Oh wait, I know! Less rollus some enchi-rah-rahs!
And so we did.

I’ve written this recipe to be more or less interchangeable with ground beef if bison just isn’t your thing, but I’m telling you right now, meat eaters, to make bison your thing — or at least give it a chance. It’s super lean without being dry, low in saturated fat and one of the most sustainable meats you can buy. Best yet, it’s really, really tasty.

You’re thinking, “It tastes like I’m a caveman.”
Well, one, that doesn’t make sense. And, two, it actually tastes more like you’re a hipster cowboy with caveman tendencies, which kind of sounds pretty ok, so….

Anyway, I hope that you’ll give bison a try, and if you’re going to do it, these super savory enchiladas — inspired by my mom-in-law’s famous enchilada recipe (the first recipe Chris ever cooked for me!) is an absolute home run. The sauce, laced with aromatic cinnamon, coriander and bay, is positively ADDICTIVE. And the leftovers, well, Boyz II Men did this whole second album that pretty much sums up my romantic feelings on that front. 😉

Get after it, folks! Hope you enjoy.

Note: Pickling spice might seem a little bizarre in a Mexican recipe, but when you break it down, it’s got tons of complex, aromatic flavor that elevates the sophistication of this simple red sauce in a pinch (literally!). I use the McCormick brand and pulse it in my spice grinder until it’s finely ground — but if you’ve got the time and elbow grease, a traditional molcajete will get the job done, too.

Heat 1/4 cup oil in a medium saucepan over medium heat and add Wondra flour. Whisk flour into hot oil until smooth and lightly browned. Add chili powder and pickling spice to form a paste and fry until very fragrant, about a minute. Slowly begin adding stock, stirring to ensure it’s smoothly incorporated. When all stock is added, increase mixture to a boil, then reduce heat to a simmer and cook, uncovered, until thickened and reduced by one-third, about 20 minutes.

Meanwhile, preheat oven to 350F. In a large skillet over med-high heat, sweat onions, zucchini, bell pepper and garlic in 1 T oil until slightly softened and onions are translucent, about 5-7 minutes, seasoning veggies with salt and pepper to taste. Add bison (crumbling in with a wooden spoon), paprika, cumin and cinnamon and cook until bison is cooked through and flavors have had a chance to marry, about 10 minutes. Remove from heat.

Spread 1/4 cup of sauce into the bottom of a 8″ x 11″ baking dish. Working directly in the baking dish, fill one tortilla with one-sixth of the bison mixture and roll up toward end of baking dish, arranging the enchilada seam side down and tucking in the sides of the tortilla, if necessary. Repeat with remaining five tortillas and filling.

Pour 2/3 of remaining sauce over enchiladas, pressing them down with a spoon to submerge, if needed. Reserve extra sauce.

Place baking dish on cookie sheet to catch drips and cover loosely with foil. Bake in 350F oven for 25 minutes. Remove foil, top with cheese and bake an additional 5 minutes or until cheese is melted.

Allows enchiladas to sit at least 5 minutes before serving topped with scallions, sour cream and the reserved enchilada sauce. Enjoy!

————————————————–
Disclosure: I received complimentary ground bison from the Bison Bison Company for general recipe testing and tasting. As always, I recommend only those items that I truly find to be a good fit in The Pig & Quill kitchen, and any opinions expressed across the site, be they negative or positive, are 100% my own. Check out bison for yourself!