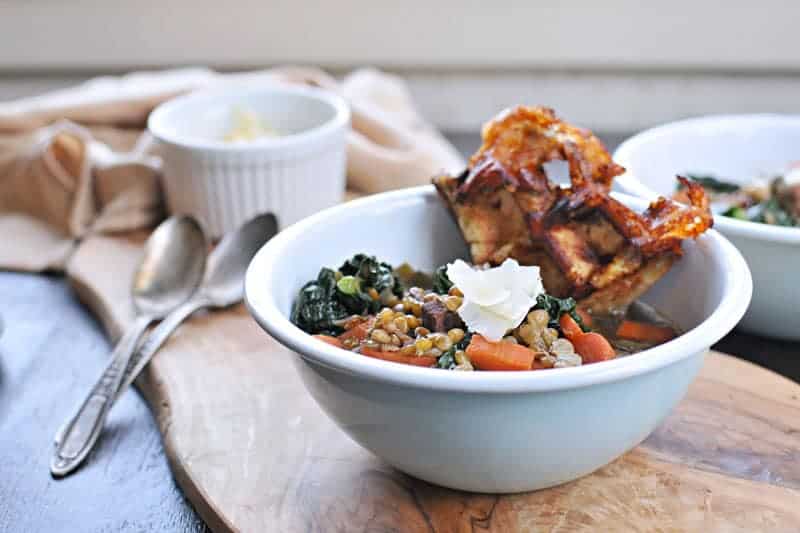 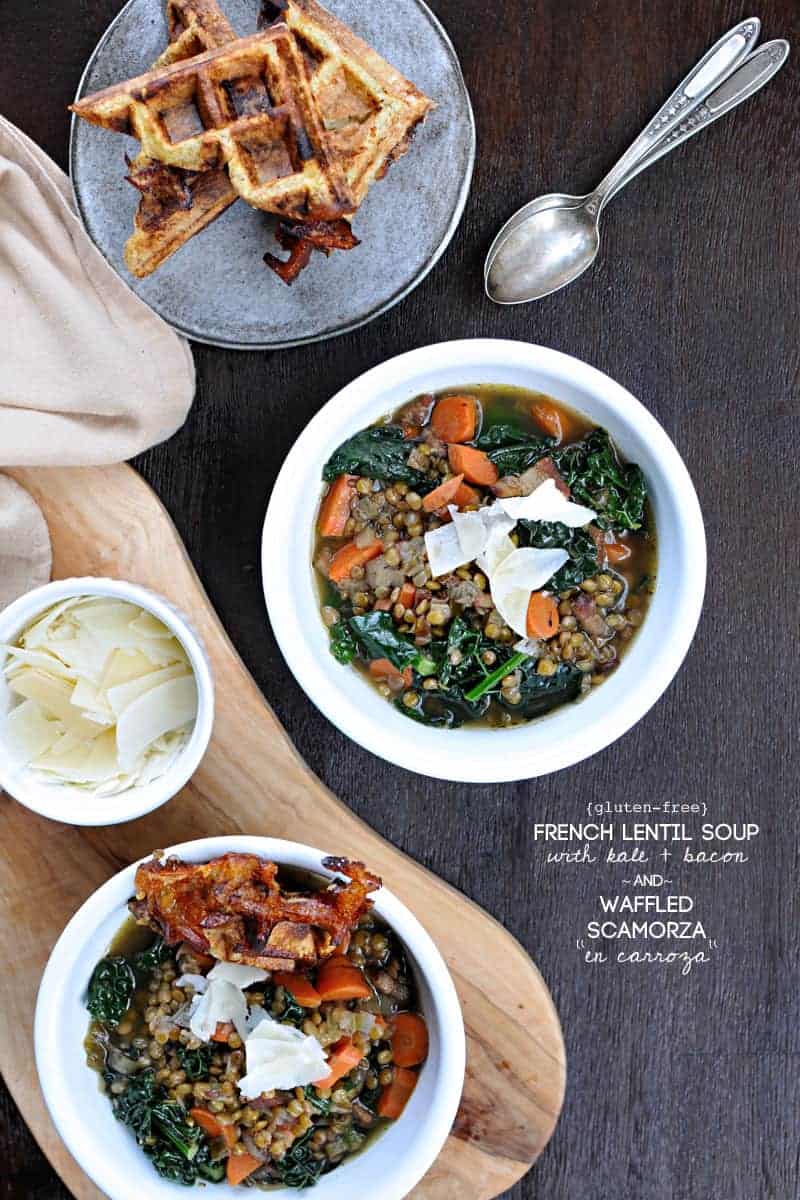 Aloha from Maui! We’re babymooning this week (holy almost 26 weeks — where do the months go?) and falling quickly in love with everything the island has to offer. So while the rest of the country is contending with the plight of the season, we’re wallowing in the misery of cool ocean breezes and more shave ice than is probably healthy. I might just birth a walking sno-cone. Nobody act surprised.

Also, to those of you facing said plight: I’m sorry. If it makes you feel at all better, I’ve seen plenty of your neighbors getting their serious burn on, and it doesn’t look like a fun time. (Mister Cincinnati Reds Hat, I’m looking at you.) So you know, you’re maybe better off. Because even a Bucks Championship (!!!) can’t take the sting out of sunburn.

Should we get on with this soup dealio?
I schmink so. 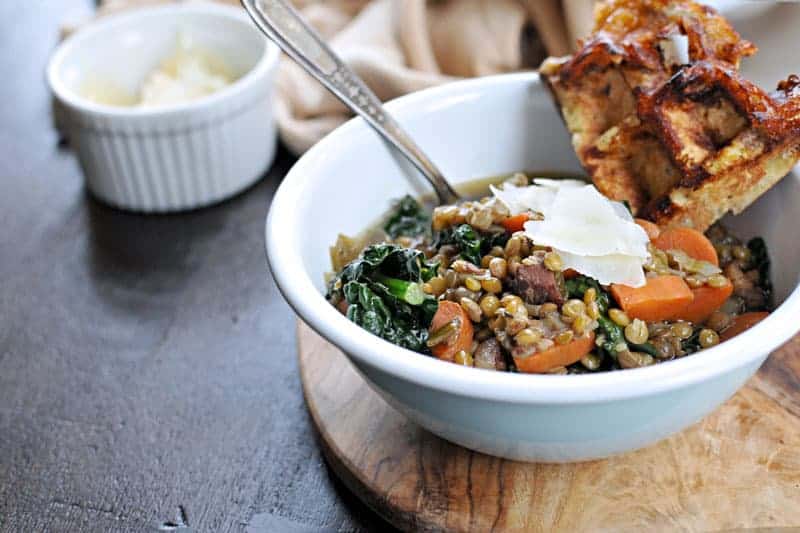 Earthy, porky lentil soup is one of those things I could eat all year long for pretty much any/every meal. It’s hearty and savory without ever feeling overly heavy or indulgent. Ok, maybe when I eat two and then three bowls in a sitting, it starts to feel a little heavy. But I blame it on the bacon, you guys! When bacon meets broth meets lentils, too much good stuff happens. That smoky, salty porkyness gets into all.the.things in the best way possible. And when you account for the approximate butt-ton of greens that get crammed into the pot, you’re pretty much looking at kale salad’s waaaaaaaaaay hotter older brother. Or maybe cousin. Like, a Southern cousin with a charming little drawl and a horse farm and a closet full of completely non-ironic plaid shirts. 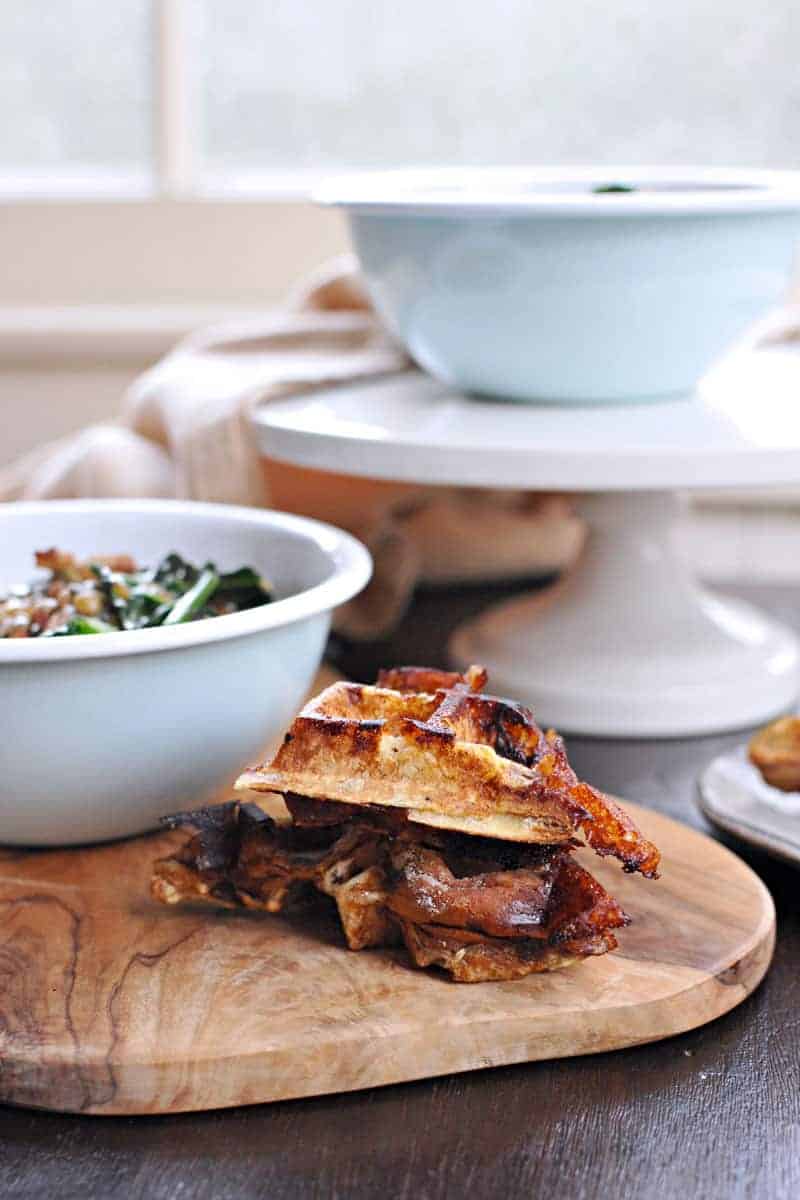 When I was in college, I fried up only too many iterations of Nigella’s mozzarella en carozza, which is, if you’ve never had the pleasure — and sweet Jesus, if that is the case, I pity you something fierce — nothing more than fresh mozz smooshed between tender white bread, dredged in milk/flour/egg — and fried until crispy. It’s every bit as heavenly as the description suggests: golden and crunchy on the outside with a silky, molten center.

The only issue with snacking this ridiculously good is that it’s tremendously difficult to improve upon. So I won’t claim to have done that here — nope, not in the least. But I did tweak it, just a little. Scamorza or smoked mozz on the inside, King’s Hawaiian on the outside. A little S + P in the dredging flour.

And a trip through the waffle iron.

Dunk that B in a bowl of porky lentils and I don’t care if it’s -20F with wind chill or 80 degrees and sunny; it’s happy belly time. *eyebrow waggle* 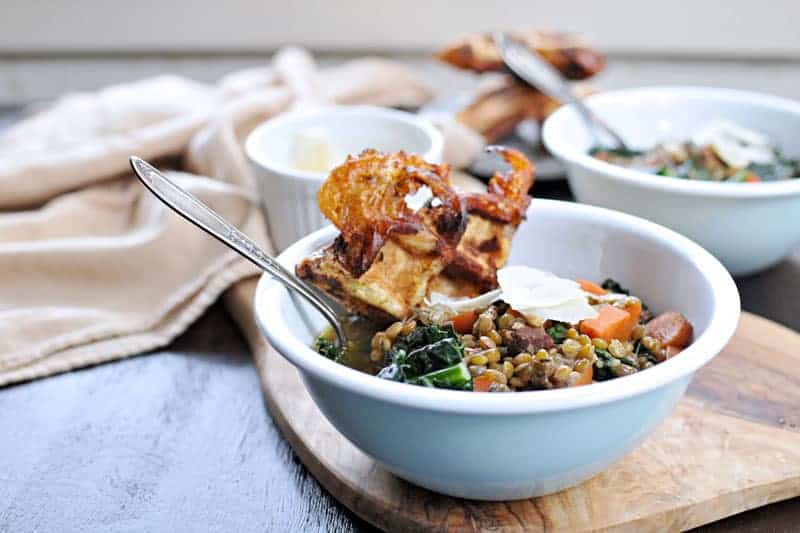 Oh, and just in case you’re not a waffler (or are you? or aren’t you? or are you?), I’ve also provided basic frying instructions per Nigella’s classic preparation in the recipe notes, below.

Aloha and happy souping, friends.
Wish you were here!
Em 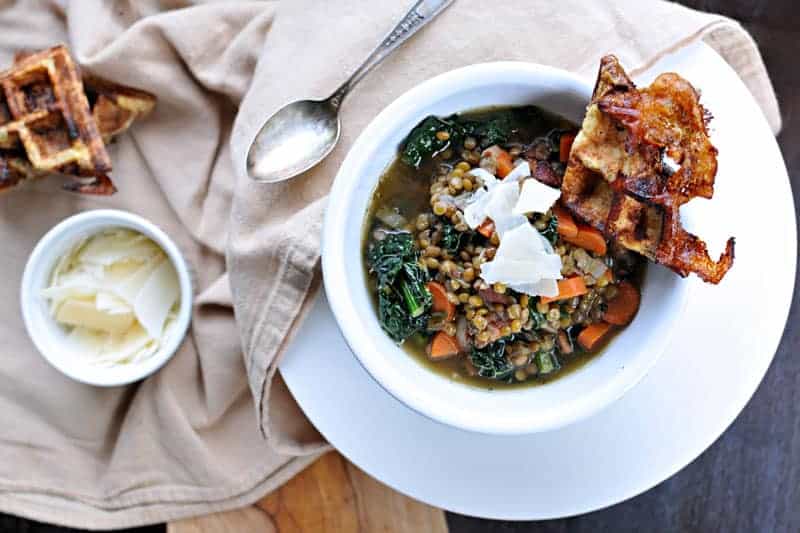 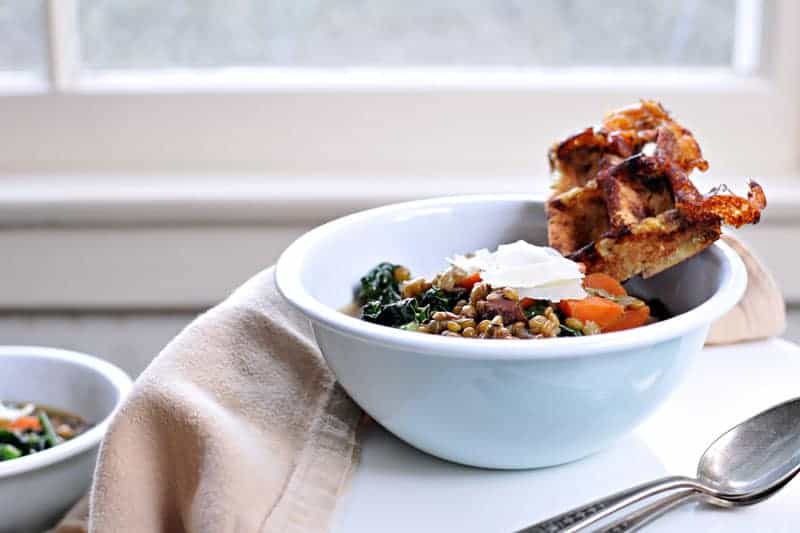 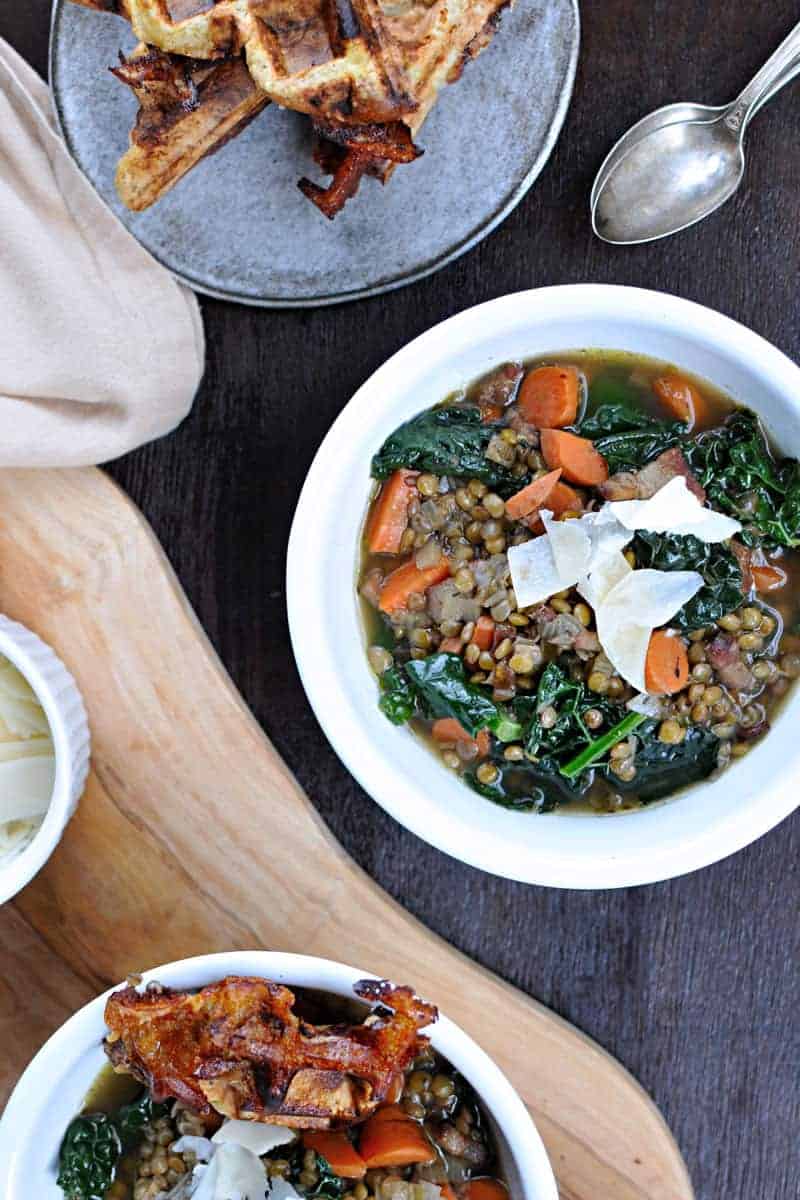 Print
Prep time
20 mins
Cook time
35 mins
Total time
55 mins
By: Emily Stoffel
Makes: 4 generous servings
Ingredients
Instructions
Notes
If it seems odd that I show the leek measurement in cups here, it's because I inevitably end up freezing about a ton of trimmed, cleaned leeks in the spring and using them all winter long, so I just scoop them out a cup (or so) at a time as needed. (Highly recommended if you're a leek freak, like me!)

Serving this soup with the indulgent scamorza sandwiches here is always a treat, but it's also great with your favorite crusty bread or croutons. And, as I will always recommend when making soups: make a full recipe, even if you don't need it. It reheats wonderfully. 🙂
3.2.2925
Waffled Scarmorza "en Carroza"

Print
Prep time
10 mins
Cook time
20 mins
Total time
30 mins
These tasty little sandwiches are something like the love child of a grilled cheese and a Monte Cristo -- in short: delicious. I've cooked them up in a waffle iron for a snackier interpretation, but be sure to see the note below for the traditional pan-fried method.
By: Emily Stoffel
Makes: 4 sandwiches
Ingredients
Instructions
Notes
This recipe is inspired by Nigella's wildly delicious Mozzarella in Carroza, which I fried up with reckless abandon in my college years.

In this version, I've swapped the traditional method of frying the (typically crustless) sandwiches in hot olive oil for a quick griddle in a waffle iron, which requires a bit less oil and produces a snackier (though admittedly less pocket-y) result. Both versions are undoubtedly delicious.

To prepare these more traditionally -- i.e. without the waffle iron -- prep the sandwiches as directed (removing the crusts from the bread, if desired), and fry them in a shimmering pool of hot olive or avocado oil until golden and crispy.
3.2.2925 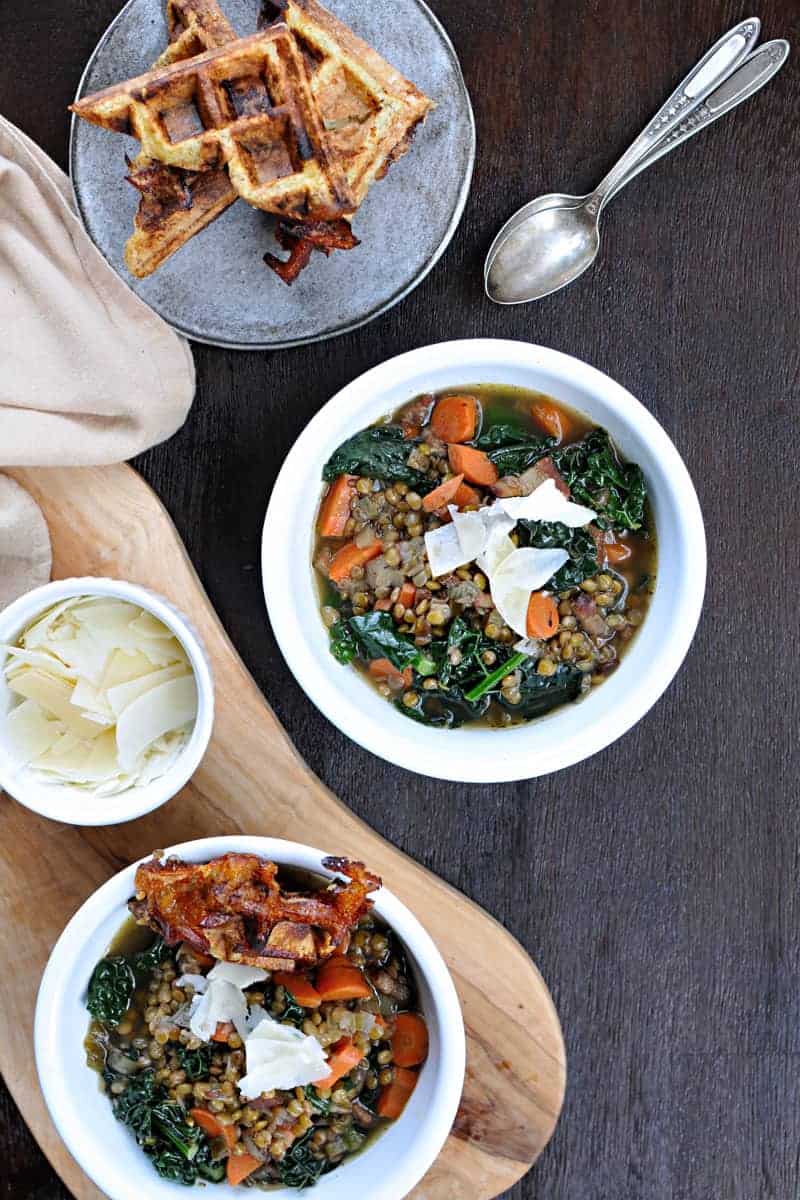