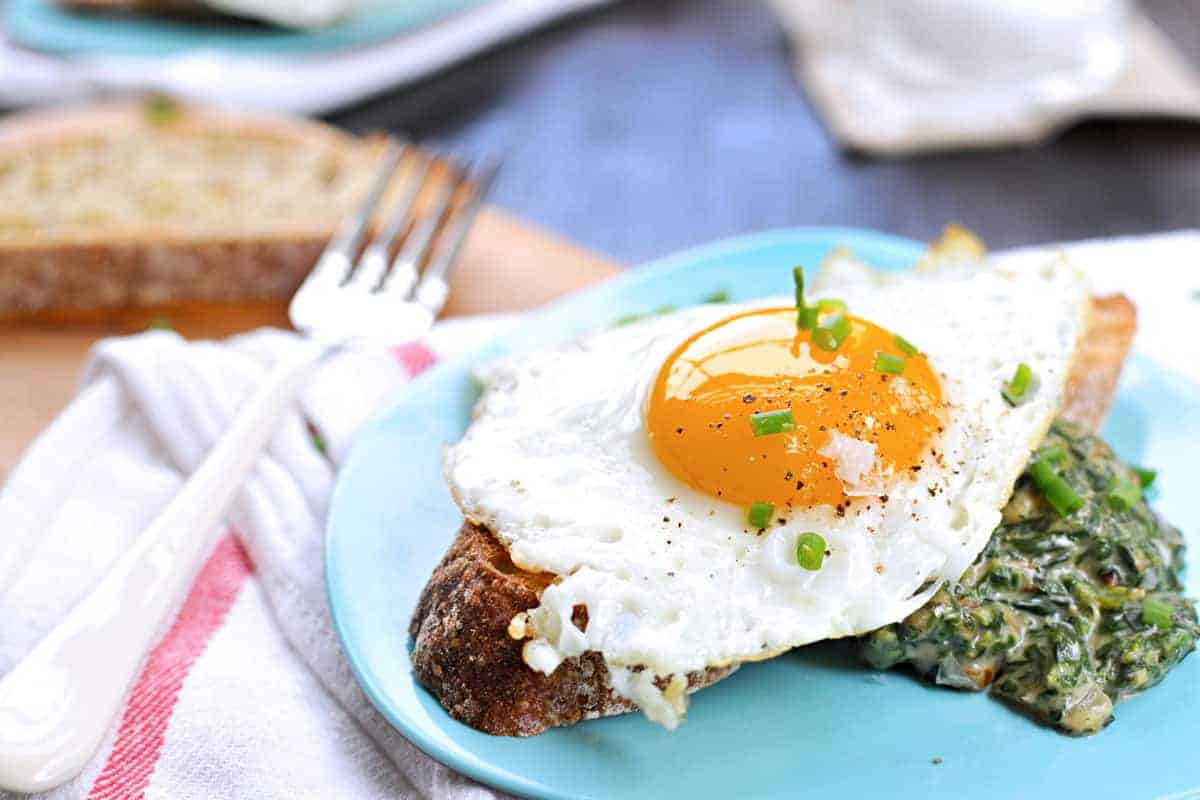 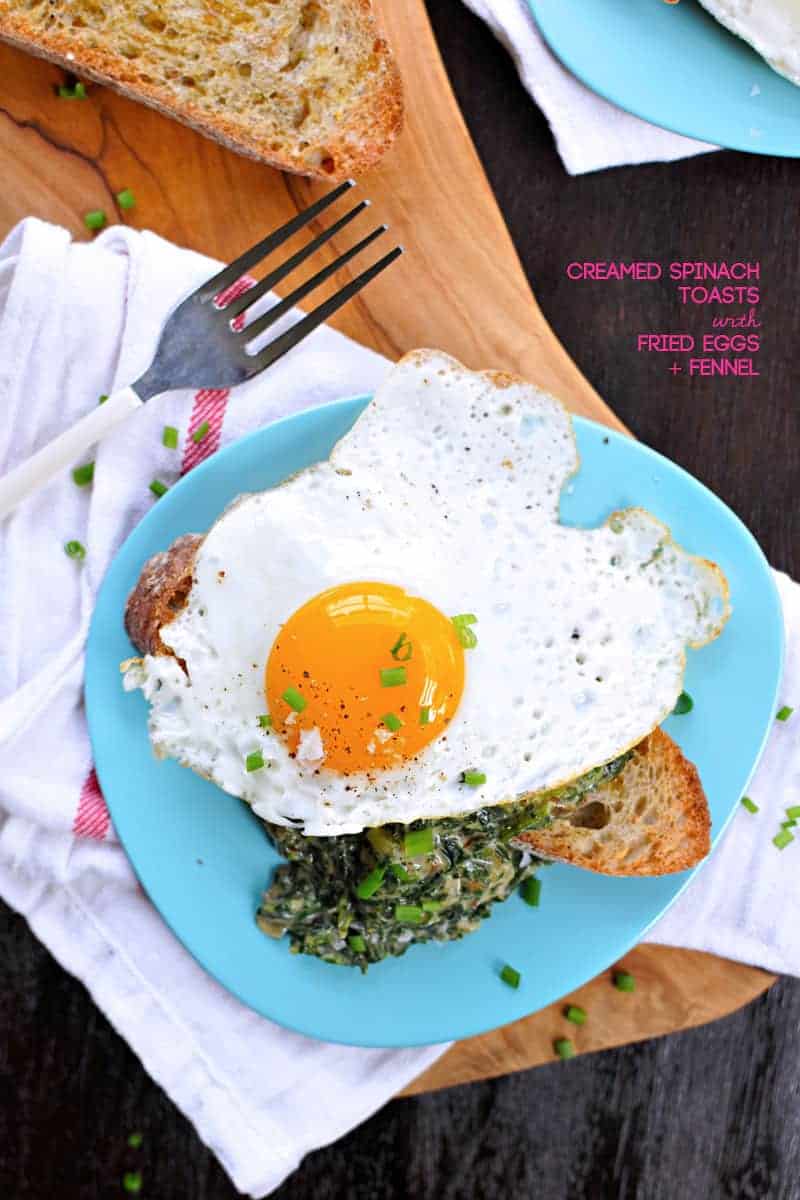 Easter eggs. Can we call these that? Is that just too easy, too obvious, when I tell you that this brunchy feast is the exact thing you’ll want to dive your face into come Easter Sunday? Maybe so, but I never promised to be a clever one. And freaking Easter eggs — c’mon! It’s kinda cute. Cyuuuuuuute. Kyoooote.

Ok, but before we talk about eggs real quick, can we just address THE JINX? Have you guys watched it? We were completely sucked in and polished off the whole mini-series in, like, three days. (I’m a liar. Two days.) And then went totally down the rabbit hole reading everything The New York Times has ever written on that squirrelly little muther. It’s only six eppies, you guys. Go watch it right now.

And then watch Mad Men, because the first half of Season 7 is finally on Netflix and I ripped through that, too. I can’t tell if I’m liking Peggy or hating Peggy or liking Don or hating Don but I think I’m liking Don and still on the fence about Peggy and probably all men should look as dashing with silver hair as Roger Sterling. Thoughts thoughts thoughts?? It’s only seven eppies, you guys. Go watch it right now. 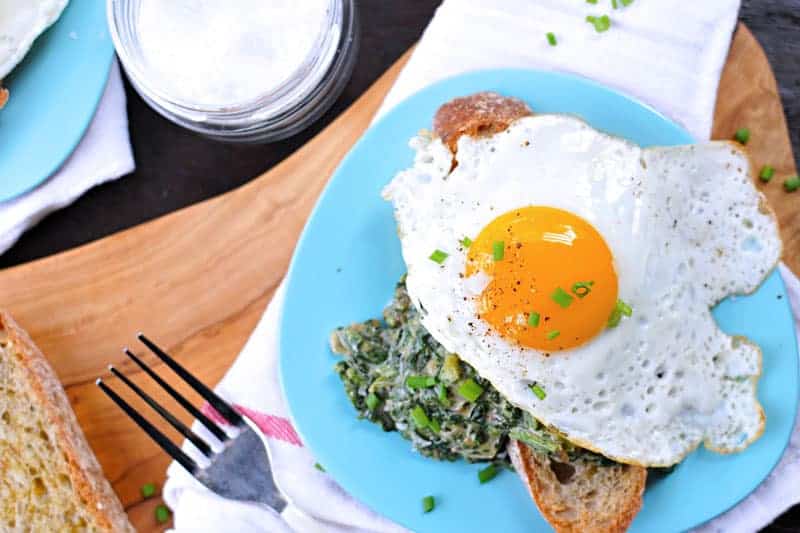 Alright, now we can get back to eggs.


When I was a kiddo, special occasions were often celebrated with petite prime rib dinners at the Black Angus or the local Lyon’s. Like many a Chinese grandma, my Paw Paw was a sucker for the ol’ early bird special, and I quickly learned the pleasure that is the herb-crusted prime rib of beef — accompanied, of course, by a dripping ramekin of au jus and a perfect sphere of whipped horseradish portioned out by the world’s smallest ice cream scoop. I took only too much joy in perforating my steak rather unceremoniously (ok, rather violently, if we’re honest) with the tines of my fork before drowning the whole thing in au jus — but that paled in comparison to the real thrill of the meal. That is: picking the two sides that would be hitching a ride to tummy town alongside my mutilated main course.

From the potato column: a baker, of course. (Sour cream and butter, miss? Oh hells yes.)
And for my veggie: creamed spinach. 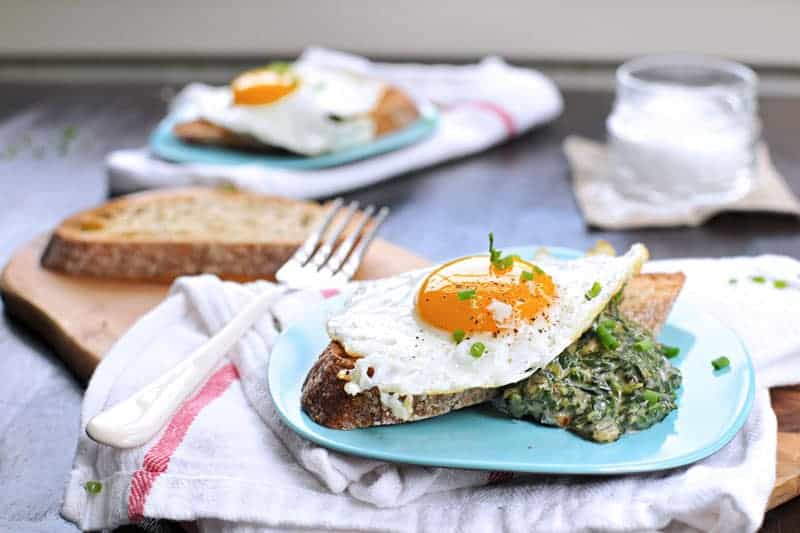 Admittedly, you don’t have to have a childhood riddled with questionable steak-eating rituals to appreciate the star of this recipe, but having a soft spot for the nostalgia that is creamed spinach in and of itself is perhaps helpful. Few veggie sides are as rich or as comforting — and when you add sweet, nutty fennel to the mix, it just becomes that much more special. (Note: the way I named this recipe is kind of misleading as the fennel is actually creamed right in with the spinach, but it just sounded better…)

On its own, the creamed spinach would make a lovely side — and please do consider allowing that portion of the recipe to stand alone a time or two, as it’s utterly spoonable — but paired with crunchy toast and a drippy egg, it’s instant brunch fare. Add an herby fruit salad and a platter of crisp bacon (or bacon-studded breakfast sausages!!) and you’re looking at a full-on holiday feast in under an hour. Not too shab-shab. 😉

Happy (early!) Easter, friends!
And seriously: go stream all the shows. Like, now. 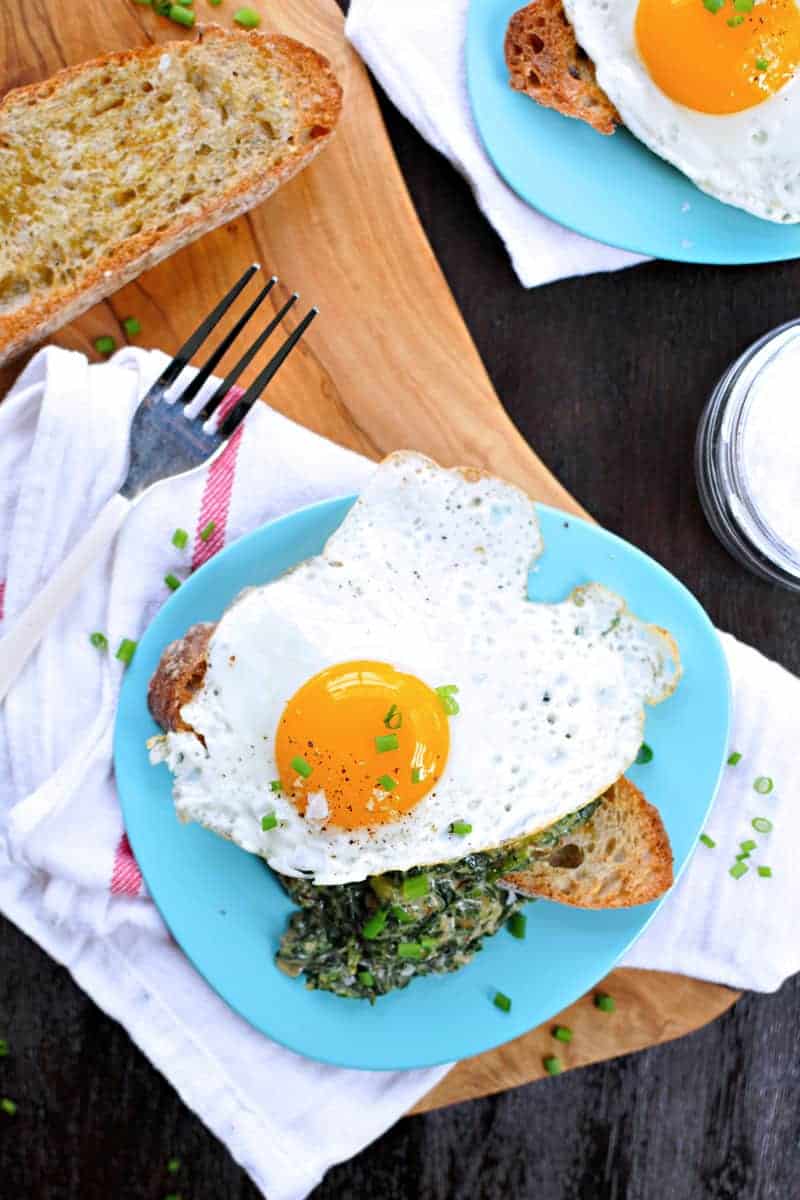 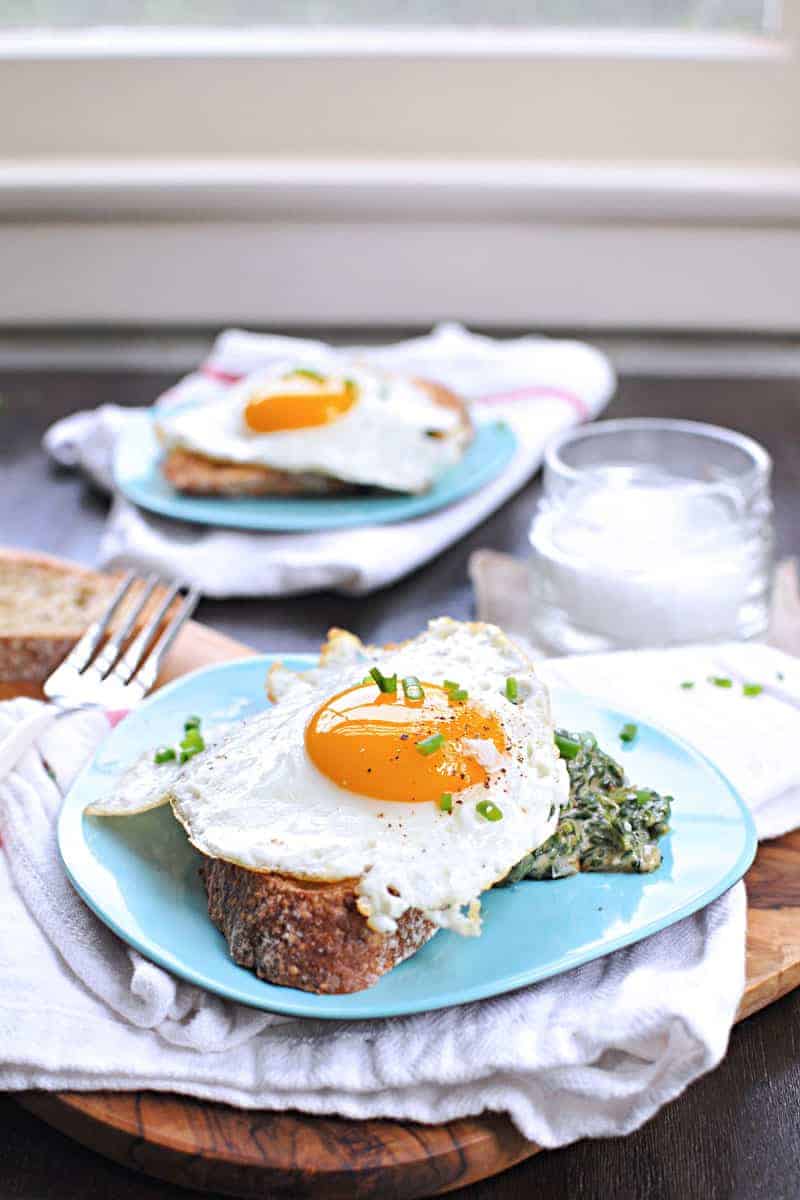 Regarding draining/wringing frozen spinach: If you've got one, I've found the simplest way to remove a majority of the liquid from thawed frozen spinach is with a potato ricer (I have this one). It takes about three presses (and maybe 2 mins?) to wring the liquid from one thawed 16 oz bag -- easy!
3.2.2925 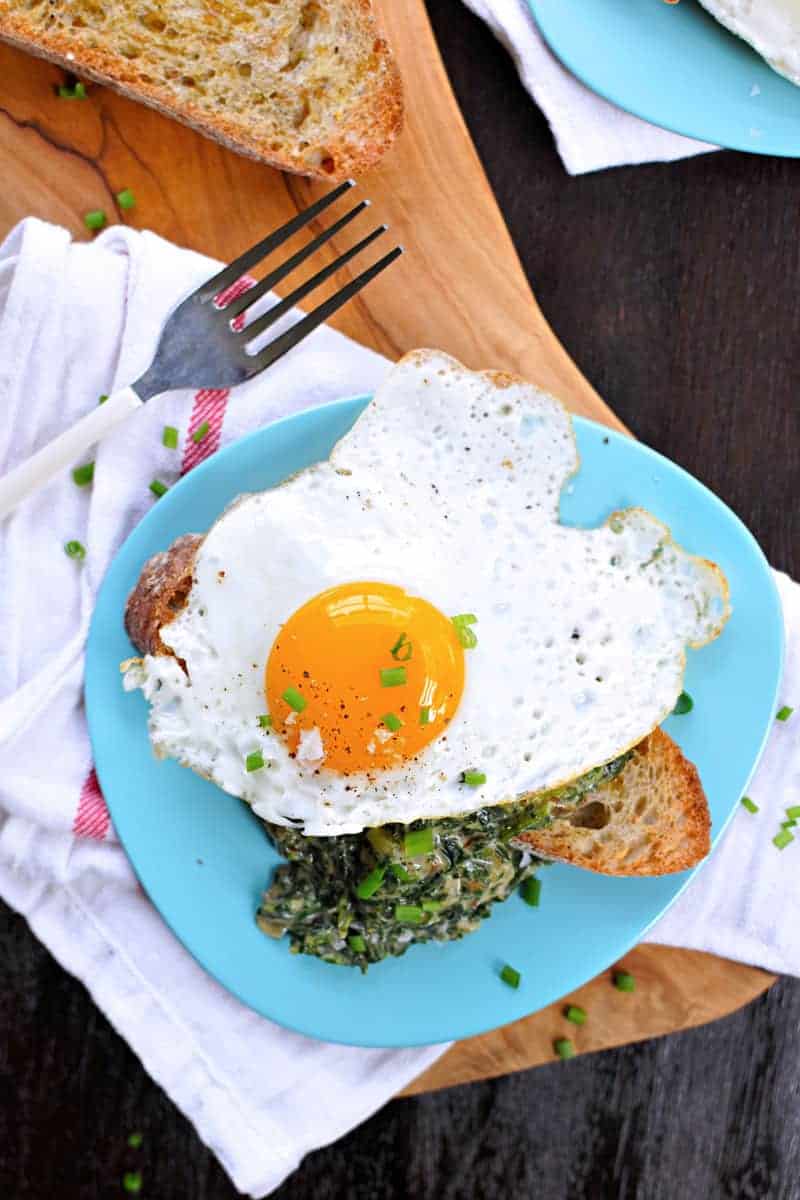