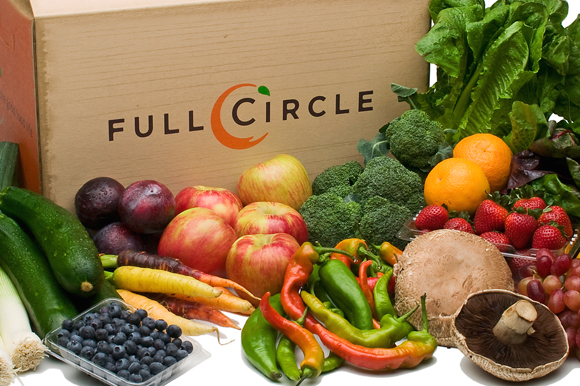 There are people that win things and people that don’t. I’m in the latter group. I suppose it could have something to do with the fact that I don’t enter many contests, but even in situations where one only has to be present to win (baby showers, bridal showers, other showers), I still walk away a loser. Or at the very least, empty handed.

To date, things that I have won in my life include:

Now for the disclaimers:

But. BUT! Change is in the wind, because just last week, I won something fair and square: Food Gal’s Full Circle giveaway, several weeks’ worth of fresh, local fruits, veggies and gourmet grocery items delivered right to my door by Full Circle Farms. In excellent Food Gal tradition, the contest required submitting a personal anecdote. Per Carolyn Jung, herself:

“Who doesn’t like receiving something wrapped up in a box? Just tell me about something you’ve gotten in a box that was memorable, special or a complete surprise. Best five entries win the produce box deliveries.”

So that’s what I did (see entry waaay below). Me and five other people. That’s right, I won a contest where 5/6 entrants took a home a prize, but I still won, dadgummit. And I’m enjoying the fruits — and veggies, thankyouverymuch — of my labor. (Big thanks to Food Gal, here, for hosting such a fun contest.) This week marked the first of what will be four weeks of complimentary Full Circle deliveries, and here’s what I received in my “Seed”-sized order (note that this is the smallest of four order sizes):

Now, the awesome thing about Full Circle’s delivery program is that you can completely customize each week’s order to include the produce of your liking. For example, tomatoes are the hub’s kryptonite, so we swapped those out with kale (green smoothies are going OFF in this house, yo). You can also change the size of your order from week to week or postpone deliveries for an extended period of time, which is especially handy in the summer when vacation schedules could otherwise lead to veggies simmering in the front porch sun. And the price? Very reasonable. While I won, muhahaha, and therefore paid $Free.99 for my first shipment, the going rate for a Seed order containing all of the above, including delivery, is just $20.95. Plus, you can kill all sorts of birds with one stone by adding jams, jellies, pickles, grassfed meats, sustainable seafood, spices, bake-at-home breads, yogurts, fresh tofu — you name it — to your order at a la carte.

So now we get to quality. And it’s spot-on. Each delivery is hand-packed in a compostable/recyclable box that uses smart dividers to protect leafy greens from bumbly potatoes, etc. Ours arrived in pristine condition, with the exception of the kale being ever so slightly wilted (nothing a quick ice bath couldn’t fix) — and the freshness is impressive. The plums (we cooked with them and ate them out of hand) were sweet and slightly crisp, the lettuce perky, the zucchini slim, unmarred and tender. I’ve not yet cooked the potatoes, but I’ve got high hopes based on the fact that they’re potatoes and, short of seeing what they shouldn’t with their beady little eyes, they can do no wrong.


In sum, I might just be sold on Full Circle. Granted, I love supporting our local City Limits Urban Farm and relishing in the weekly bounty we receive June-September, but it will be nice to have a fresh produce delivery program to take us through the fall and into the holiday season. And with the option of adding artisan groceries to any order, I can even see picking up a few Christmas gifts along with future orders, which just screams efficiency.

Oh, you’re still reading. Well then, why not check out the entry that won this spectacular Full Circle produce delivery? True story:

My best “in a box” story: When I was six, I was incredibly attached to a tattered bunny-blanket that I called, creatively, “Bunny.” Bunny and I were inseparable, and I like to think I offered him just as much security as he offered me. One day, in an attempt to (justifiably) wean me off of Bunny, my mom decided to strike a deal: I could keep Bunny with me for as long as I wanted — if I stayed out of trouble in the classroom. Chatty child that I was, I came home the very next day with a polite note from my teacher regarding my “excessive socializing” during class. And just like that, Bunny was gone. Or so I thought. Twelve years later, a Freshman in college, I received a care package from my mom. It in I found everyone’s favorite homemade Tollhouse cookies, a week’s supply of Maruchan Ramen bricks & haw flakes, hair barrettes — and Bunny, cleverly clutching a note. “Phew, thought I’d never escape Mom’s undies drawer. Figured you might need a buddy now that excessive socializing is not frowned upon but encouraged.” My partner in crime was back.

4 Comments on “On winning contests and fresh veggies”