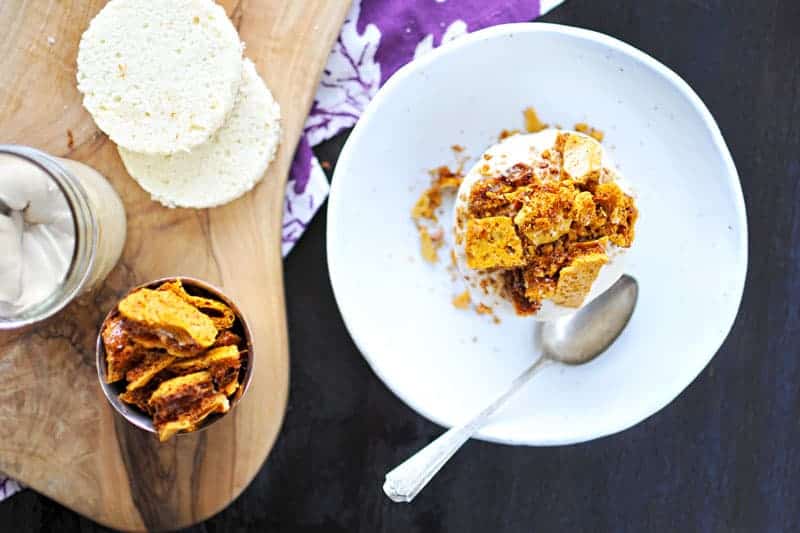 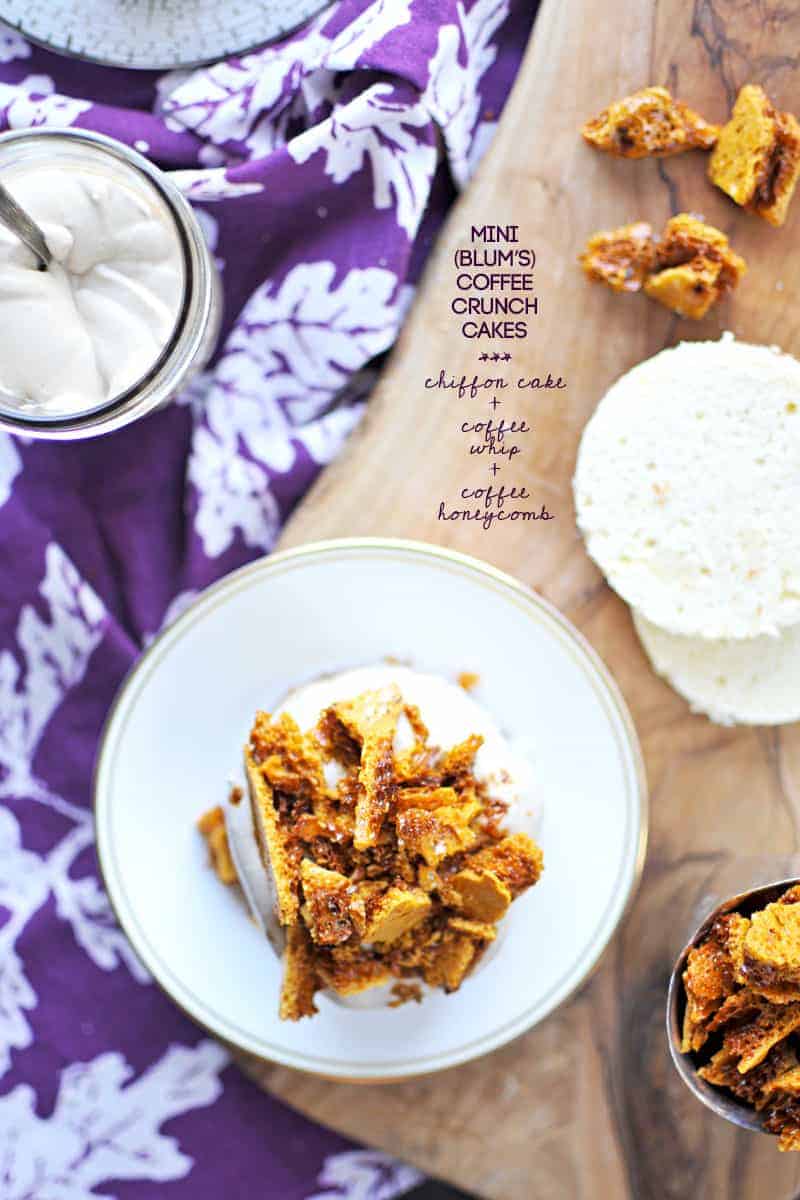 Babies, I have determined, are perhaps the best drug on Earth.

In their presence — with just one whiff of sticky-milk cheeks, a gentle raking of fingers through downy soft hair, the trill of a new voice finding new volumes — time both stands still and speeds up, a pinwheel turning wildly in the wind. Your own future becomes both vastly clear and deliriously blurred. Those newborn nights you were certain would never end; the physical pain of complete and total exhaustion that you thought you were prepared for, you silly goose now hardly more than a “remember when…” in the wake of even more sticky-milk cheeks and downy soft hair and a too-rapidly maturing voice that has found not only new volumes but baaaaahs and goooohs and even multisyllabic, sing-song coos that I swear resemble the words “let’s get french fries.” (No lie. Chris heard it, too.)

It’s all you can do to stop and ponder — aloud, perhaps, in the middle of a grocery aisle — how the past day or week or month has possibly fallen underfoot when you can hardly recount how you passed the last 60 minutes. 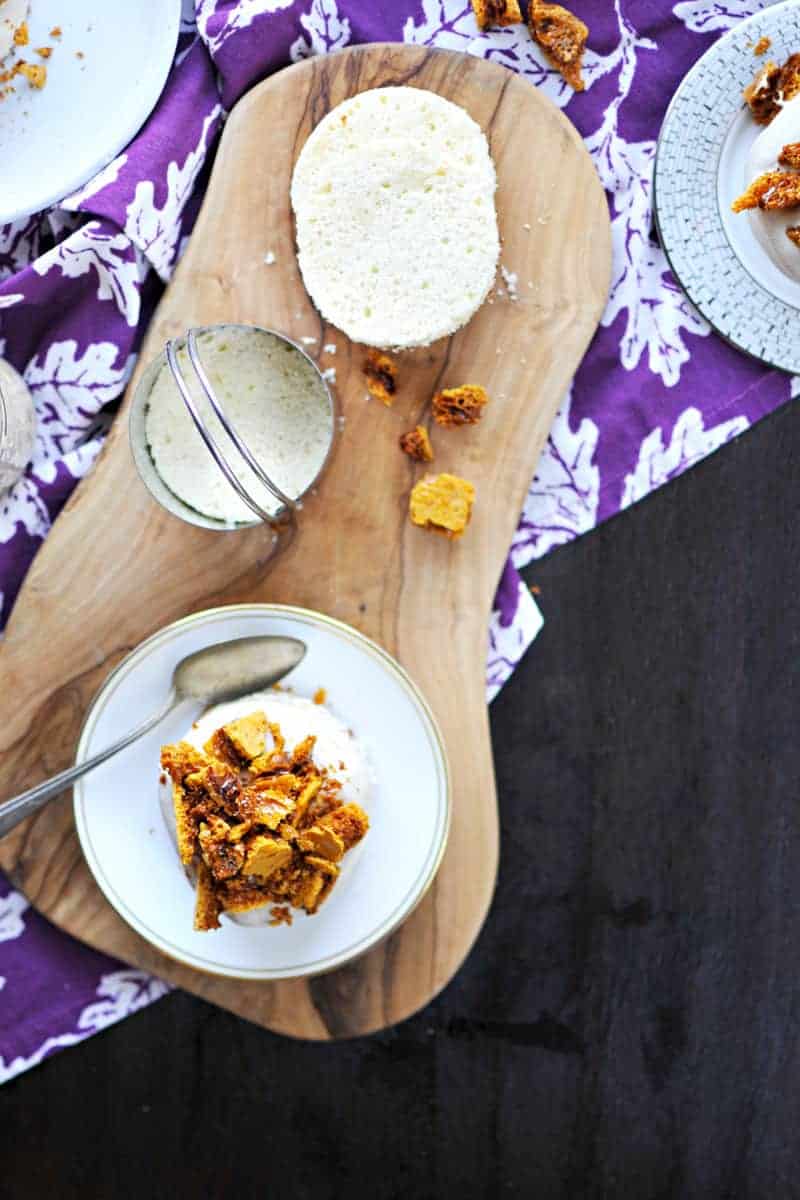 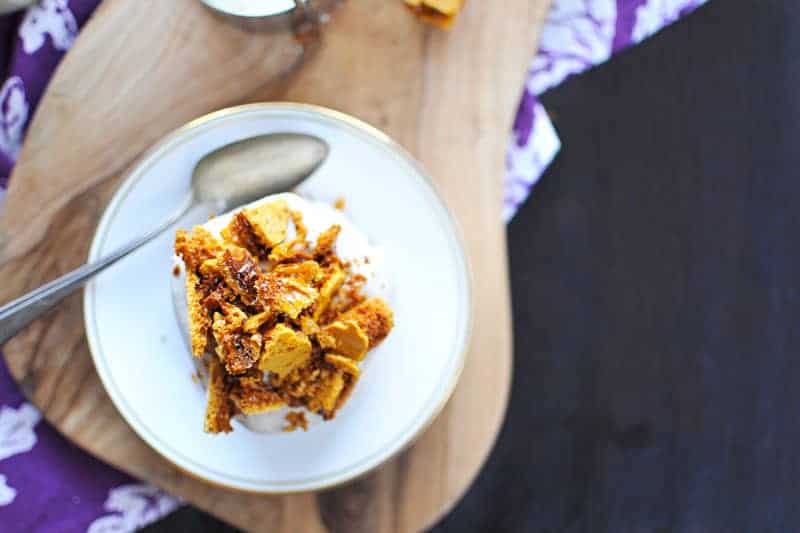 Clearly, the sweet behbes my world turns for these days is our little Lana, but the rate at which time has lapsed these past several years of blogging is similarly intoxicating. Which is why, as this quaint little space — my first baby, of sorts — came upon its third birthday earlier this week, I put on my big-mom pants and baked some damn cake.

Grown-up cake, too, with stuff like sifted flours and separated eggs and the always-mysterious cream of tartar that I can’t help but think is going to make my cake taste like fish and chips. (It doesn’t.) It was scary at first. But then, kinda like those long first nights, it was over, and before me sat not one or two but 10 little cakes(!!!), all hugged with espresso-laden coconut whip; crowned with the sweet sharpness of fluffy, toasted sugar; and saying sweet things like “eat me” and “let’s get french fries.” 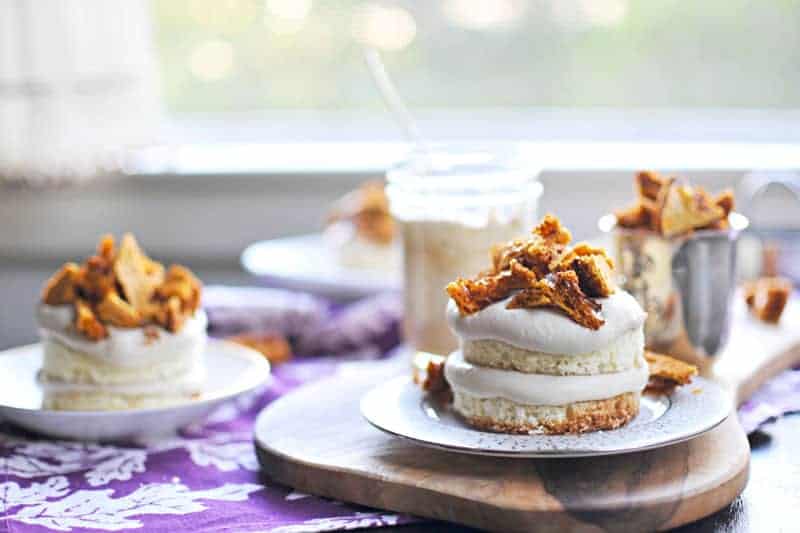 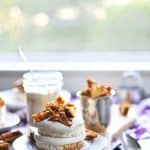 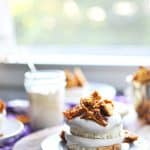 These little cakes are a very close iteration of Blum’s famous Coffee Crunch Cake, a close cousin of which was served for dessert at Lana’s Red Egg Party (a traditional Chinese coming-out party, of sorts, for new babes) last month. In the original version, chiffon cake is generously layered with a coffee-spiked whipped cream and then tiled with a mosaic of crunchy honeycomb coffee candy — and the play of spongy cake, fluffy whip and crisp candy is nothing short of spectacular.

This version is hardly any different. The cake is the same. The crunch is the same. But since I’ve been on the wagon (or rather off the cow’s milk) for the better part of three months, the whipped cream portion — which I was so hesitant to eff with since it’s such a major component of the whole dang thing — is replaced with an espresso-accented coconut whip that actually holds up pretty well in the fridge while remaining ethereally whhhhippy and not at all as coconutty as you might expect. (In fact, Chris couldn’t pick out the coconut flavor at all, and we all know he’s the kinda guy who’s always lookin’ for the hook, if ya feel me…) 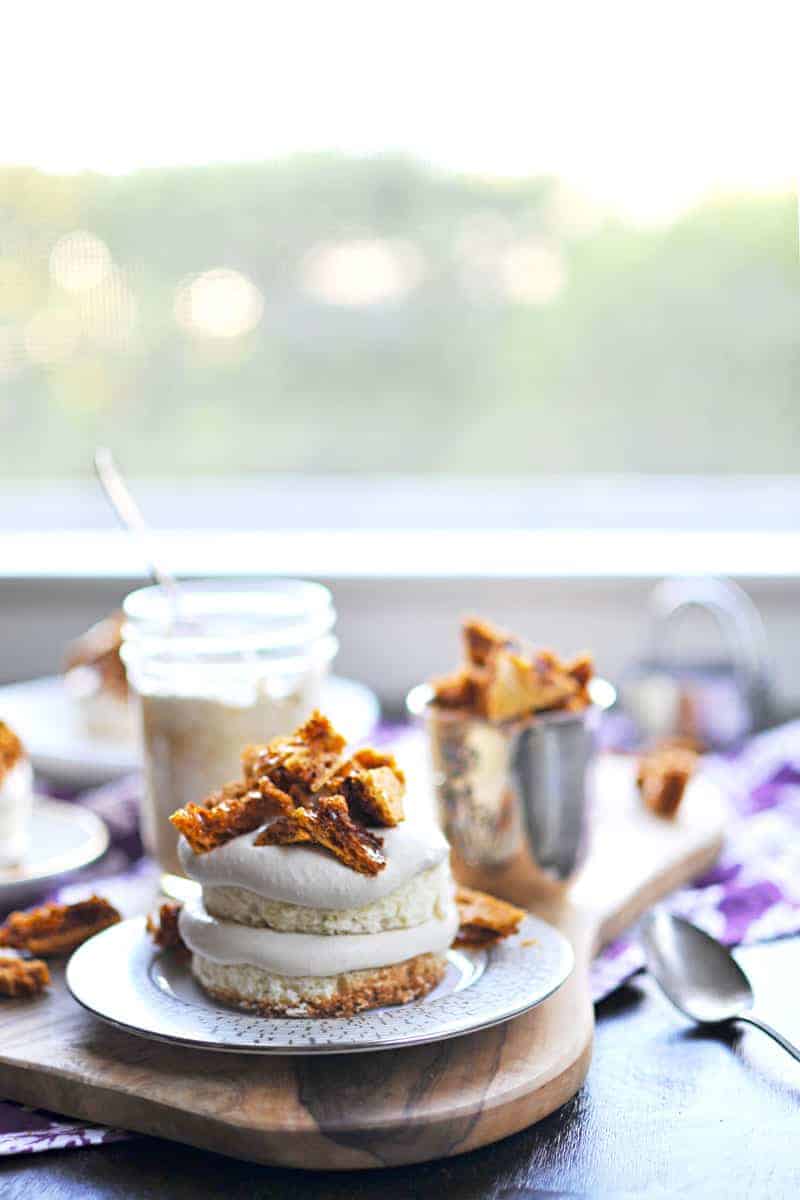 You can, of course, assemble the cake per its original design: that is, halved with cream and crunch sandwiched between the layers, frosted with more cream and then coated with crunch. But knowing that the delicate crunch begins melting almost as soon as it hits the cream, I rather liked the idea of punching out a bunch of mini-cakes and assembling them to order. It preserves the crispness of the topping. It totally dodges the whole frosting an entire cake thing. And most importantly, it’s just really flipping cute. (It also leaves you with a bounty of cake scraps that are ideal for turning into little Coffee Crunch Trifles per the recipe note below. Yay!)

So. Thank you, dear friends, for tagging along for three years of what has truly been a greater adventure than I ever imagined. It’s true, I’d probably keep plugging away at this even if no one read along (and who’s to say you do?!), but it wouldn’t be nearly as fun. Plus, I do enough talking to myself these days as it is.

Hugs and cake to everyone this post reaches, now or later, for taking a moment to spend time with me here in this space. Happy Birthday, P&Q!
xoxo,
Em 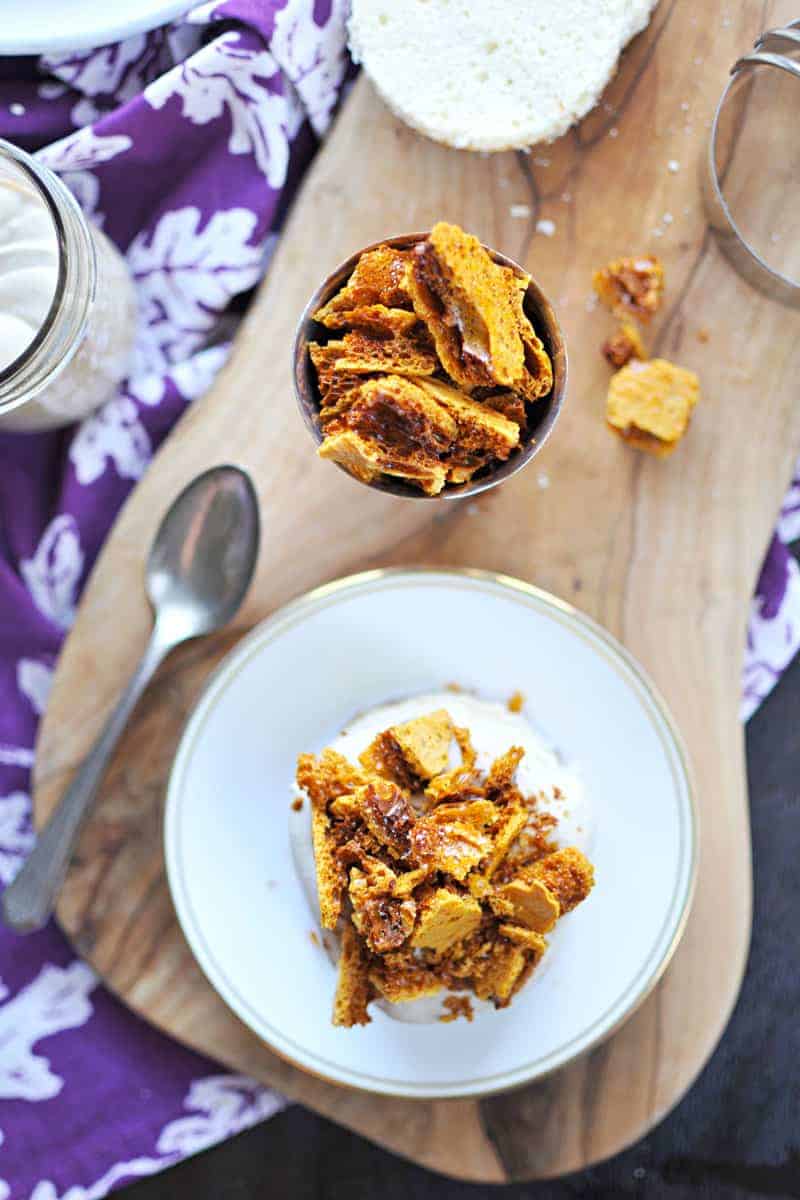 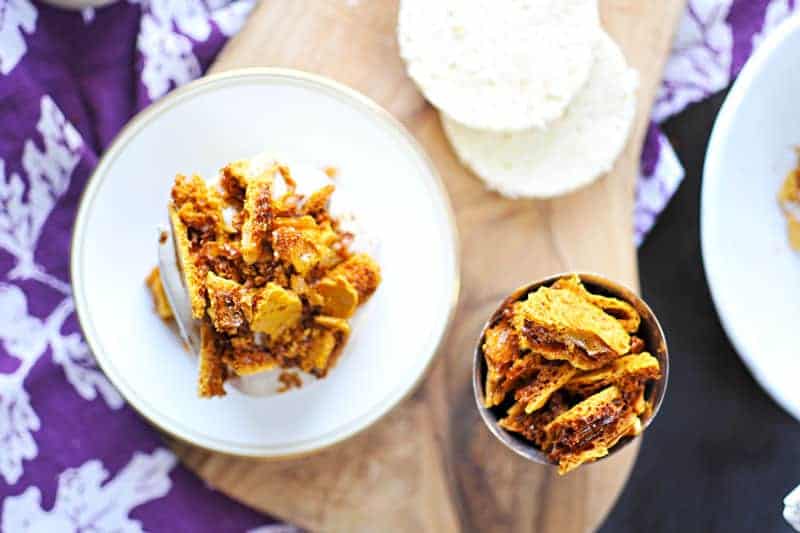 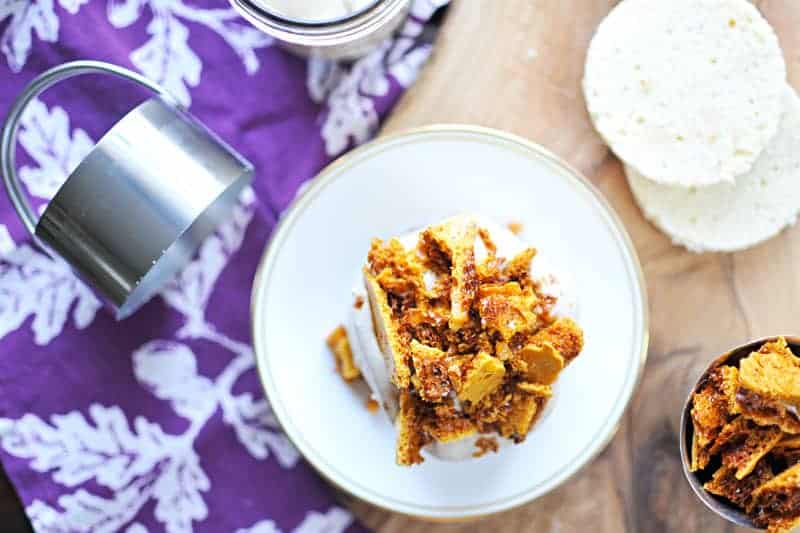 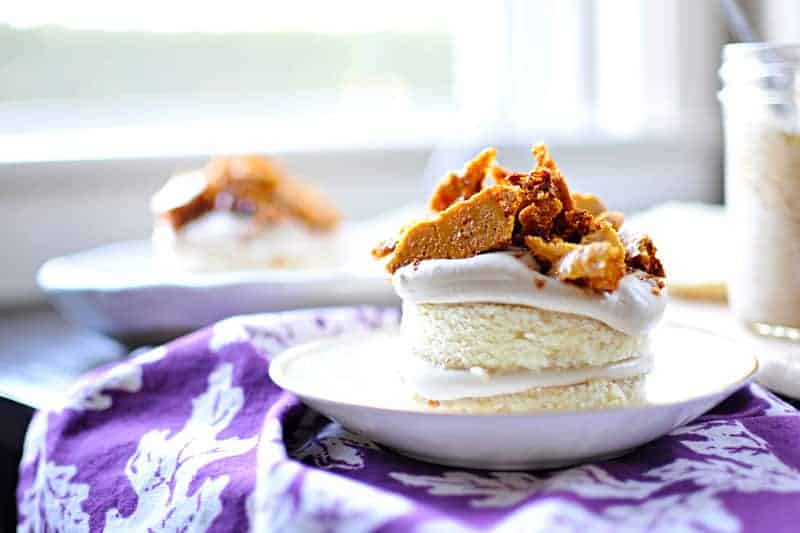 Print
By: Emily Stoffel (Cake + Coffee Crunch borrowed from Serious Eats)
Makes: 10 mini cakes, plus scraps
Ingredients
Instructions
Notes
I can't take credit for the perfection that is the Chiffon Cake portion of this recipe, nor for the crisp, airy Coffee Crunch Honeycomb topping. Both of those are inherently dairy-free and come straight from Serious Eats' adaptation of Blum's original (which apparently comes from Valerie Gordon's book Sweet) -- and they are solidly developed and very tasty. My main contribution is the Coffee Coconut Cream, which is a dairy-free stand-in for the traditional Coffee Whipped Cream and surprisingly satisfying and subtle in its coconuttyness. It's creamy, silky and practically foolproof (I've yet to overwhip coconut milk). I might even prefer it to the original!

Regarding the candy temperature for the Crunch: I could not for the life of me get the candy to escalate from 270F-305F in the pan without it scorching by the time the baking soda was whisked in, even off the heat. After several attempts (and the house and my hair reeking of burnt sugar), I pulled the pan from the heat right when it reached 270F anticipating that it would keep rising while I quickly whisked in the baking soda, and it worked like a dream. Could just be my limited experience with candy making or my candy thermometer (though we did check the calibration right before starting!), but go with your gut. Candy that is smoking is too hot!

Trifle Variation: The cake scraps from this recipe lend themselves beautifully to individual trifles boasting all of the same features and flavors of the cake but with a much more casual assembly. Just tear the scraps into bite-sized pieces and layer them in tiny trifle (or wine!) glasses with the Coconut Coffee Cream and plenty of Coffee Crunch Honeycomb between and over the top. (If you're feeling particularly...rustic, we'll say...you can even skip the mini cakes altogether and trifle the whole dang thing!)
3.3.3077 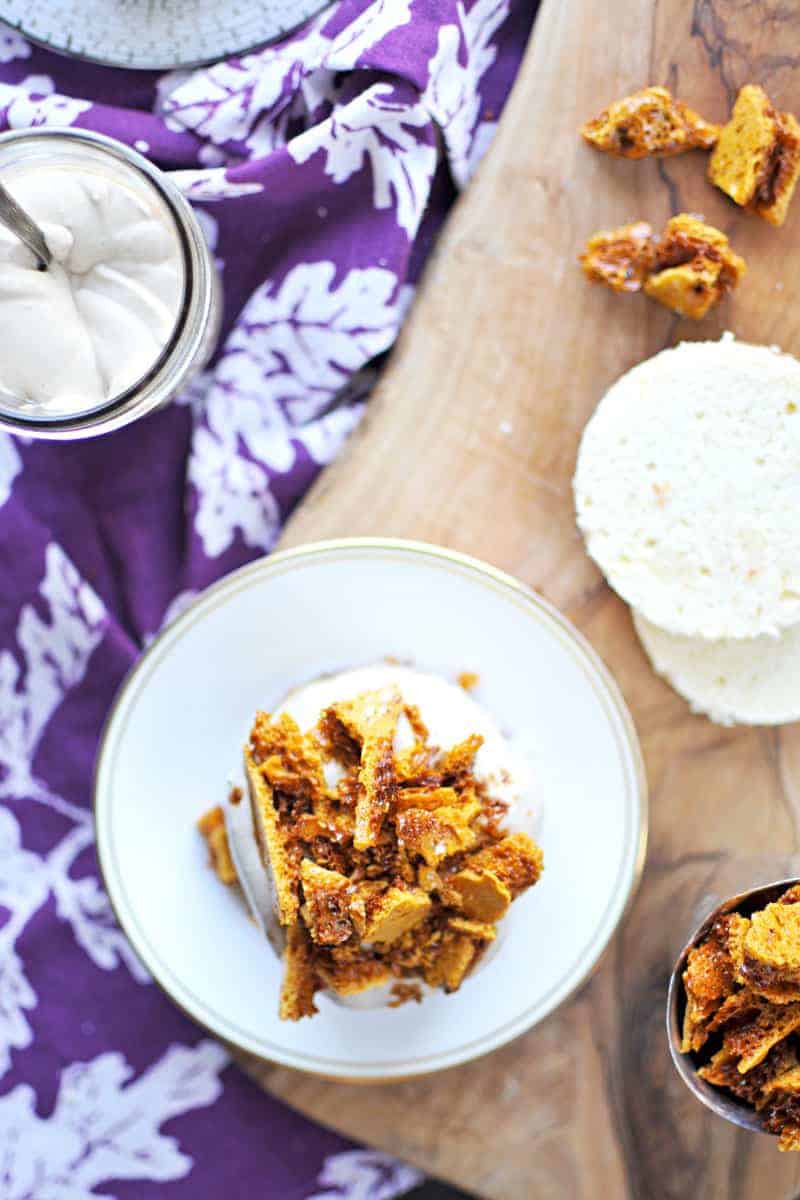