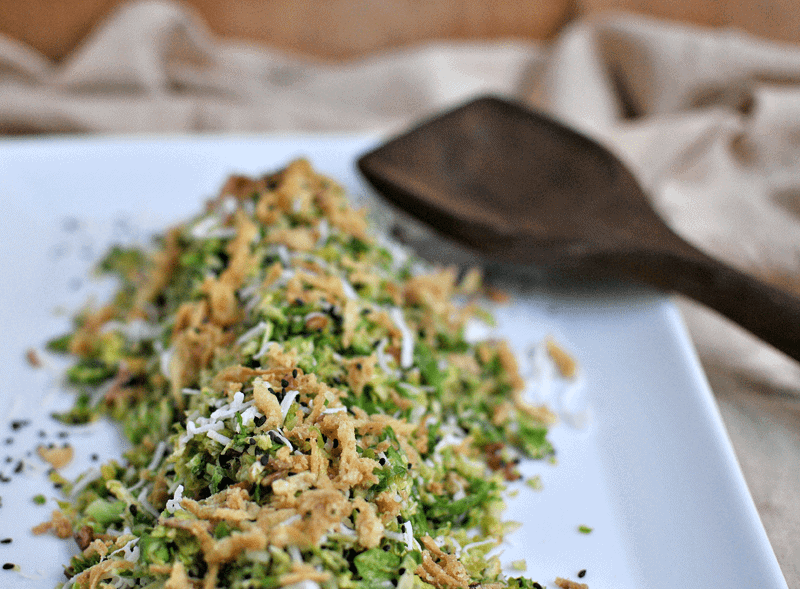 (Update: Well, it’s true that I’m currently flying, but now I’m en route back to CA. Posting this a couple days late because I wanted to be sure you guys got a glimpse at Joel’s Oscar popcorn post in time for the big night! Happy Oscars!)

Pigs are flying! And not just because you never thought that you’d see the words coconut, pecan and brussie in the same sentence. I mean, maybe you were hoping you’d never see the word brussie again after I posted two BR recipes almost back-to-back a few weeks ago…but that matters none. What matters is that I’m literally sitting on a jet plane en route to C-Bus to take the bestie by surprise for her 30th birthday. Yes, I’ve got a lot of buds with friends in Feb. It’s a celebratory month.

Also, I’ve had to pee for the last 27 minutes. And it’s not even like I’m pinned in. I’m on the aisle, blocked only by my ‘puter and the dwindling baggie of Trader Joe’s Omega-3 trail mix on my lap. Truth be told, I kinda like the feeling. It’s reminds me how excited I am to jump out of the giant paper mache pig we arranged to have wheeled into the banquet room where we’re holding Amanda’s bday bash. In the style of Lady Gaga, I’ll be wearing a baconkini.

None of that is happening. But I am so excited to see her that I could pee. Which in all honesty is going to have to happen sooner or later, for real.

On your end of things, this salad should happen sooner or later, with my bias being toward sooner. I think I referred to it as the crackiest salad yet the other day, and for good reason. Buttery pecans. Chewy, sugar-flecked coconut. Crisp, salty fried onions, all lightly dressed with a sweet-tart balsamic vinaigrette? It’s a beautiful thing, both literally and figuratively. Subtly Southern. (Always love that.) Simple enough for every day. Sophisticated enough for company.

Chris endorsed this with a, “Good job, babe. Really good job.”
In the land of compliments, that’s the equivalent of telling me I have the hair of a Victoria’s Secret model.

Note (or maybe more of a confession?): I forgot to add the carrots when I took this picture. They would have made the picture better; they would have made the salad better. Don’t forget the carrots. And don’t underestimate the power of a good quality, fruit-infused balsamic in the dressing. It boosts all of the decadent flavors to new heights. To purchase Enfuso balsamic reductions, visit www.enfuso.com.

Whisk together dressing ingredients.
In a large bowl, toss together brussies, carrot, coconut and pecans. Combine with dressing. Top with fried onions and extra sesame seeds just before serving. Crack out.