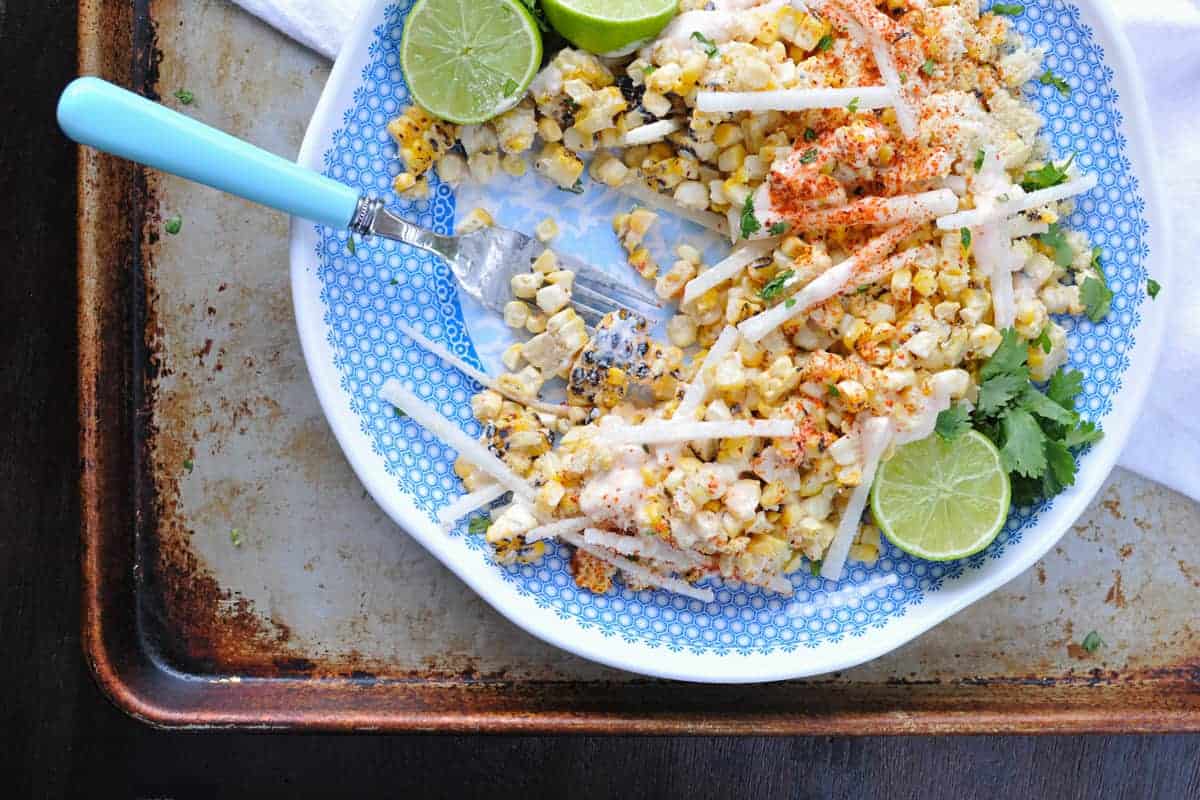 Because a summer without corn is just pool hair and ReddiWip.
Ear cuffs and Dippin’ Dots. Rollerblades and boy bands.
Oh, sorry, thought we were listing our fave childhood shit.
Are you still there?

The shameful thing is that corn actually isn’t all that commonplace in our house, even when it’s at the peak of candy-sweet, 10-for-a-dolla awesomeness. The simplest explanation would be that Chris is so neutral on corn that it breaks my heart a little each time he fails to give it even a passing glance. But really, it’s because corn in our house turns into, without fail, all the corn in my belly. Ever. Like six ears in one sitting and then it’s at least half an hour of “baaaaaaaaaaabe whydyoulemmeeatsomuch cooooooooooooooooooorn.” And then some corny bathroom comment, because together Chris and I have a combined age of, like, 11.

This season, though, I was lucky enough to find corn in our crisper more than once, and after seeing vendor upon vendor packing sweetly charred kernels of mayo-draped corn into tiny plastic cups along the Malecon, I kinda had to follow suit.

So I started with the basics – a bright, zippy version of Mexican street corn that’s got all the shalangalang of the classic but oomph’d up a tad so it eats almost like a salad. Which is perfect, because there’s no such thing as eating six ears of salad, so your belly is totally safe. And if there is such a thing as eating six ears of salad, it’s probably one of those things that’s 100% endorsed by healthy, six-packy people like Gwyneth Paltrow. In fact, I’m pretty sure Gwynnie would be tres down with overeating some Mexicorn. Real life, guys.

After you eat like six salads of Mexicorn (ah, you’re just rolling with it, that’s cool of you), you’re probably gonna want to shift gears and crack out another bushel of sweet corn with — ya’ll ready for this? — some SPAAAAAAAAAAAAAAAAAM.

But I’m gonna save that for tomorrow. Because I’m tricky. And also 47 jillion corn pics are a lot of corn pics, even for a CRNLUVR like me. (<– new license plate, it’s happening.)

So, this is today. And Mexican Street Corn loaded with crisp jicama, cool crema and salty cheese is calling. your. name.
Happy Schweet Corn Season!

Print
Prep time
15 mins
Total time
15 mins
By: Emily Stoffel
Makes: 4-6 side servings
Ingredients
Instructions
3.2.2807
Digging on this corn? Check back tomorrow and get the recipe for the Hawaiian Spam variation pictured at the top, dudes!

Print
Prep time
5 mins
Cook time
5 mins
Total time
10 mins
By: Emily Stoffel
Makes: As much corn as you'd like!
Instructions
Notes
I've yet to find a method of charring corn faster than my gas cooktop. I just plop the rinsed corn directly on the grate over a high flame (I can get two ears per burner) and keep a careful eye on 'em. You'll want to be sure you're using BBQ-quality, high heat-resistant tongs for the turning since the flame can easily melt right through most plastic-tipped utensils. (NO I DON'T KNOW FROM EXPERIENCE.) If you don't have a gas cooktop, an outdoor grill over direct heat will work, too.
3.2.2807
————————————————–

Oh hey, before you go…

Like whatcha see here — or have a question, feedback, or recipe hack to share? Join The Pig & Quill convo by commenting below (I love, luv, lurve comments) and hang out with me on Facebook, Twitter, Instagram and Pinterest. And don’t forget to subscribe to P&Q emails (see that nifty box up there in the sidebar?) or add me to your RSS reader with Feedly or Bloglovin’ so you never miss a post. x’s & o’s!