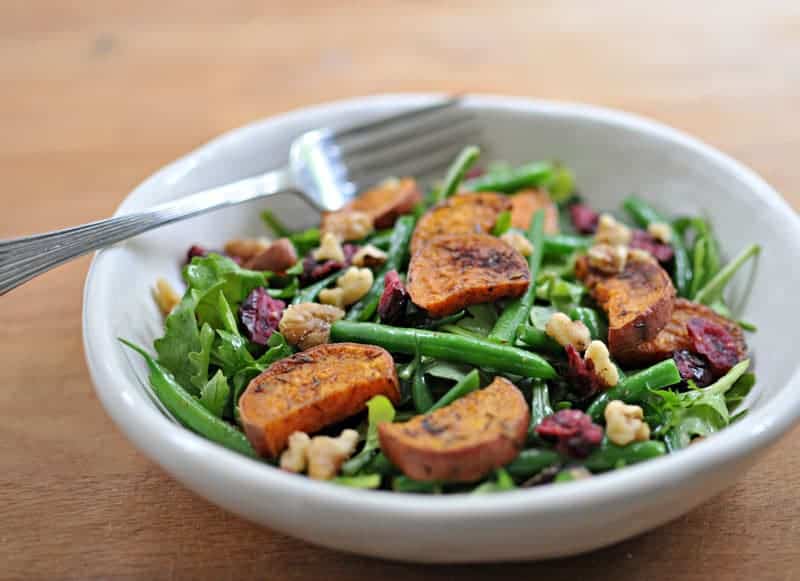 {Reminder: our Saucy Mama Giveaway is open until June 29th!
Win three mustards, or just take advantage of the P&Q coupon code. Have you entered yet?}

In the past 96 hours, I’ve eaten pizza. I’ve eaten pastrami. I’ve eaten burgers and fries and snappy-skinned hot dogs that, while delicious, no amount of papaya juice can make go down easily. I’ve had pork belly upon pork belly upon pork belly: on sandwiches, in soup and in a salad that showcases one of the tastiest flavor combos I’ve tried. I’ve had cookies and ice cream and caramels and, ohhhhh the coffee drinks. There’s been fried chicken. Popcorn. Breakfast sandwiches on the daily. And ramen.

Of course there’s been ramen.

Chris calls this salad The Revitalizer, and after four-going-on-five days of eating the way I’ve been, it’s the only thing I want in my belly.

‘Cept maybe a cronut.
Yeah, I could probably make room for a cronut.

Hoping to get a more elaborate NYC Eats recap up once I’m back. In the meantime, have you entered the P&Q Saucy Mama giveaway yet?

Back to Cali soon!

Notes: Honestly, I don’t really have any worthwhile comments for this one. But isn’t it pretty? It’s super pretty. Like, I kind of can’t imagine eating anything else, ever. Or maybe that’s the belly-ache talking.

Preheat oven to 450F. Toss sweet potatoes with cinnamon, 2 T olive oil, 1 tsp sea salt and thyme. Arrange on a baking sheet in a single layer and roast 25-30 minutes or until potatoes are tender and just beginning to brown. Set aside to cool slightly.

While potatoes are roasting, fill a large bowl with cold water and ice. Bring a large pot of water to a boil and salt generously. Add haricot verts and cook briefly, 1-2 minutes or until beans are bright green. Remove and immediately plunge into ice water to stop cooking and set color. Cut beans in half lengthwise. (Now’s a good time to make the dressing, too.)

Combine vinegar, maple syrup, mustard and salt/pepper in a medium bowl. Whisk in olive oil. Adjust for seasoning. (Alternatively, shake ingredients together in a jar.) Store for up a week in the fridge.