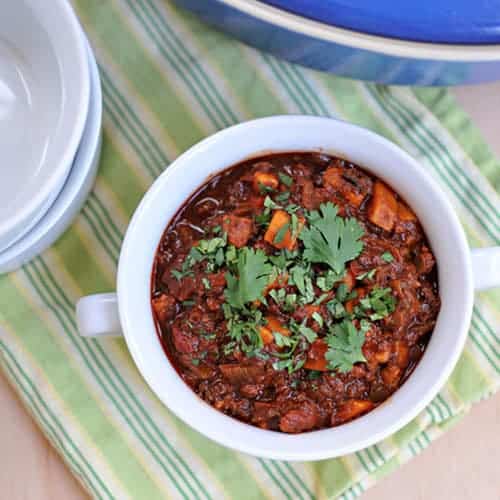 Ready for a story guys? Here goes. Last week at work we had a chili cook-off. The First Annual for our little company, I’m guessing. We’re a team of about 30 people, with maybe two-thirds of us in the office on a “busy day.” So, because most of us like to eat — and a handful of us really like to cook — we had a chili cook-off. The word quaint should probably be in there somewhere.

Requirements for the cook-off? None. No heat restrictions, specific diet accommodations, nada. This was anything goes, people. And guess-friggin’-what.

…Against a carnivore’s dream of tender braised beef and Mexican spices, the Vegan Soyrizo chili stood strong.
…To the slow-cooked, searingly hot concoction of chorizo and beer, this Bad Mamajama said Efffffffffff Youuuuuuuuuu.
…Even its fellow Vegan — its fragrant and saucy, bean-laden brethren — had to bow down.

So maybe the odds were ever in my favor. I’ll take a win where I can get one. And when it comes to chili, there’s kind of a lot of cred associated with being able to slap somethin’ as game changing as Award Winning in the title — even if it is a hippie little chili full of cinnamon and other earthy crap.

Yeah, ok, it’s weird. But it’s also really delicious. All sweet and savory and smoky and numnum. Consistent with my animal-free Earth Day theme from last week, making this chili has an “I heart amminals” satisfation factor equivalent to rocking a baby panda to sleep in your arms.

Note: I love using dried mushrooms in a dish like this. The flavors are supremely concentrated and they’re a tremendous value. To hydrate mushrooms, rinse dried mushrooms and add to a saucepan with 3 cups water. Bring to boil. Remove from heat, cover and let stand for 15 minutes. Drain mushrooms, reserving resulting stock. Filter stock through a fine sieve lined with cheesecloth before using.

In a large saucepan, combine dried chilies, roughly chopped onion and garlic cloves with enough water to cover. Bring to boil, then cover and reduce heat to a simmer for 15 minutes.