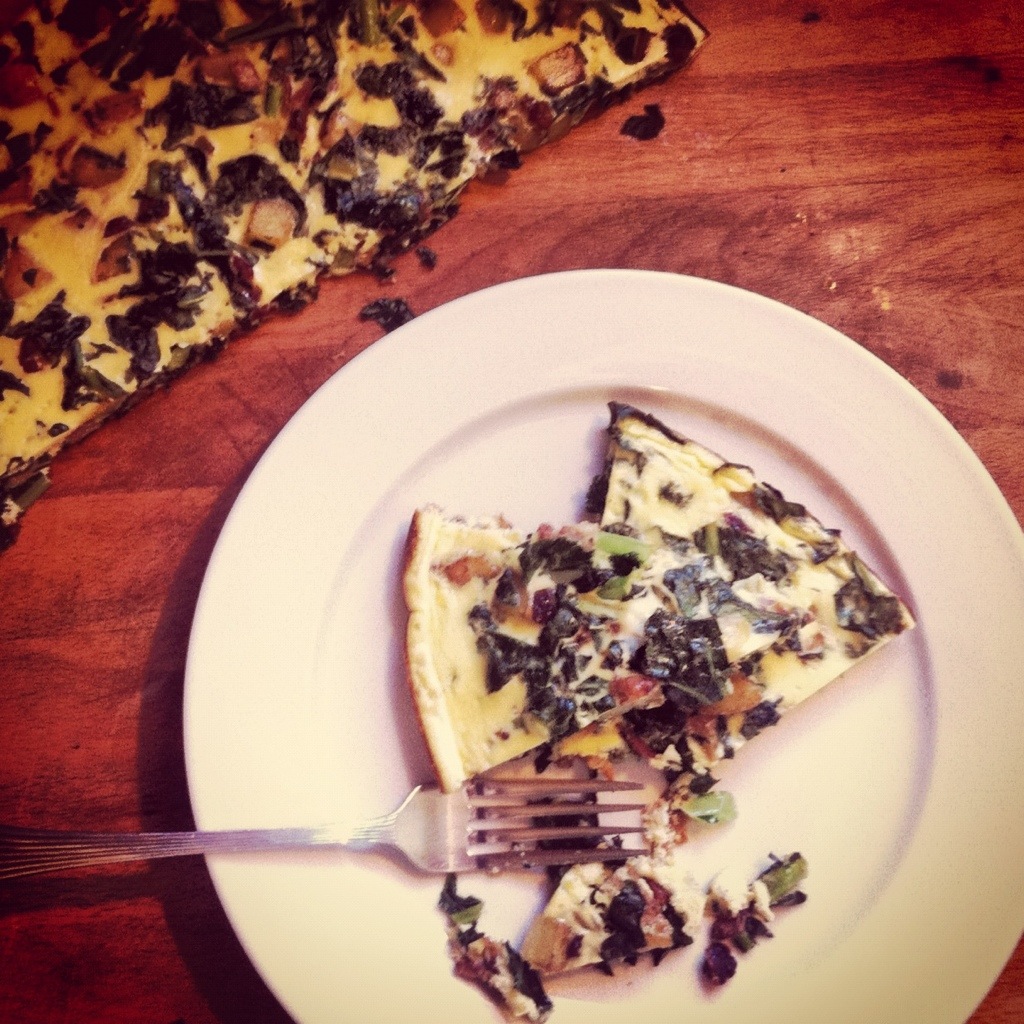 Well, it’s happened. I’ve returned to the Real World — and not the seven-strangers-under-one-roof version but the wailing inbox and buttloads of laundry version that is far less smutty and just a hair dreadful. It was bound to occur sooner or later.

On the upside, dread of return this severe can only be sign of an unusually successful vacation, and that it was. I’ll provide a much more elaborate rundown in posts to come, but for now let’s just say Costa Rica was as unfailingly awesome as promised, full of ridiculously therapeutic juvenile humor, Jurassic Park-style scenery, glorious adventure sports and, it goes without saying, plenty of porky delights. Indeed, it seems a cocktail of rice, beans and seawater does a body pretty damn good.

But we’re not talking rice and beans, yet, are we? Nosireebobski, we’re talking tortillas – in particular, the Spanish variety: that of pillowy egg, tender potatoes, tiny browned onions and Spanish spice. Started on the stove and finished under the broiler, this here is a bit of a shortcut tortilla, although there’s nothing sacrificed in my book (save for the risk of floortilla with a flip gone wrong). Factor in a nutritional seesaw of streaky, rendered bacon (duh) and verdant kale and you’ve got yourself a one-pan wonder for breakfast, lunch or dinner. Maybe add a salad for a meal with a little more feel-good factor. Maybe don’t. Far be it from me to judge.

Note: At some point, I’ll no longer need to specify that I luurves me some Trader Joe’s Bacon Ends & Pieces in recipes where bacon is chopped or diced, but I’ll go ahead and point it out once more. They’re such a friggin’ good deal, and the rugged, misshapen bits are often meatier than the uniform slices. For recipe purposes, I always approximate bacon in strip quantity juuuust in case the general public isn’t as infatuated with, or – gasp! – doesn’t have access to, these little gems. Obv, minus the bacon, this would be veg-friendly. Just sauté your peps and spuds in about 2 T of olive oil to start and bulk things up with a ½ cup of sautéed criminis or rinsed, cooked cannellini beans.

Preheat broiler. In a small bowl, thoroughly whisk together eggs and milk. Set aside. To a cold, ovenproof skillet (10-12” in size), add bacon and render over medium to med-high heat until just crisp, 5 minutes. Add onion, bell pepper, potatoes, paprika and sage. Stir to coat in fat and cook until potatoes are tender and lightly browned, about 8 minutes. Add kale and nutmeg and cook, covered, 2-3 minutes or until kale wilts and reduces in volume. Season to taste with salt and pepper. Shake pan to distribute mixture in an even layer and pour over eggs, tilting pan to distribute over ingredients. Cook over medium flame 3-5 minutes or until edges are set and can be easily lifted away from sides of pan. Place entire skillet under broiler and cook until center is set, another 3-5 minutes. Allow tortilla to cool slightly before sliding from pan and cutting into wedges. Top with smoked salt just before serving.

Nsale selfies time. It takes a village, folks — my best friend accompanied me to shop the sale in-store, my mom came out to help entertain the kiddo and everyone pitched in to keep all parties fed while I toiled away late into the night. All in the name of sorting through 6k sale items to bring you the best, most wearable pieces for fall. It’s a strangely cathartic, slightly stressful, super exciting time to be part of @themomedit team, and everyone pulls out all the stops to make what has turned into a bit of a chaotic sale as fun and easy to shop as possible. Weird gig but wouldn’t trade it. Link to my post in profile. ✌🏼
More or less took off the month of June, and I have zero regrets. Hugged and hosted lots of my favorite people, read during daylight hours, bought all the snacks. TBD on whether this very uncharacteristic boomerang on the ol’ feed means I’ve completely thrown in the towel on the algorithm (and aesthetics), but I am giving fewer and fewer you know whats.
Hey folks! 👋🏼 Em here. (Duh?) Few new faces around here, so I thought I’d share a little about me.
Cheers to the weekend! 🥂🍓
Heading to bed dreaming that these Sweet Corn + Green Chile Waffles with Peach Pico will magically manifest themselves in the morning...and they kiiiiinda will since our freezer is almost never without them. 😎
One sheet pan, one pot, Easy Eggplant Parm Pasta coming in hot! Tender, silky eggplant, crunchy garlicky breadcrumbs, zero frying, 30 mins, optionally #vegan. Link in profile. Get your summer on. 😎
Still don’t know if it’s giff or jiff and I don’t really give a fiff.
Don’t mind if I dooooo... 🤏🏼
When you have nothing planned for dinner (what else is new...) and then realize you have everything you need for these Pantry-Friendly Zucchini Fritters! 🙌🏼 That’s a tiny Friday win, but I’ll take it, folks.