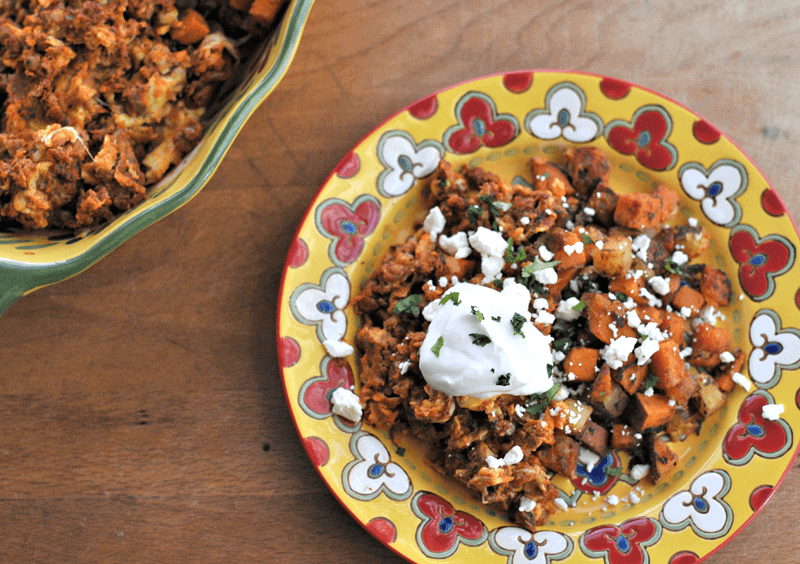 First, a reminder: have you voted for the Pig & Quill in Cook Taste Eat’s Facebook contest yet? Voting closes Friday, and I am dreadfully behind, so if you could pull out all the stops and convince everyone know you to vote, that’d be great. On the line: an opportunity to cook and film with celeb-chef and restauranteur Michael Mina, so it’s kind of a big deal. Thanks! On with the post.

Sometimes Mondays kind of suck. Sometimes they don’t. I’ll let you guess which kind of Monday I had.

Did you guess the sucky one? Geez, I guess that’s more telling than it should be. Am I really that negative? Yeah, I know. Adding it to the list of stuff to “work on.”

But really, guys, I had a particularly un-sucky Monday. Let me tell you why.

So that’s my Monday. Rather excellent, wouldn’t you say? And now your Monday is about to get better, because when eggs, soyrizo and potatoes collide, you’ve got a breakfast that makes (even) your (vegetarian) taste bugs stand up and high-five each other. And then they fist bump. And then, then do you know what they do? That slow-mo fist-bump-turned-jellyfish thing. Yep, it’s that frickin’ good.

Add olive oil to a large, nonstick fry pan and heat over med flame. Add potatoes and 1/4 cup water and simmer, covered for 10 minutes or until potatoes are tender. Remove lid and increase heat to med-high, cooking until any remaining water has evaporated. Using a spatula, carefully loosen potatoes from pan and add all spices, tossing to combine. Saute seasoned potatoes an additional 5-10 minutes, stirring occasionally, until lightly browned.  Remove potatoes to serving dish and loosely tent with foil or set aside in a warm oven while you cook eggs.

To the same pan, over med-high heat, add soyrizo. Fry several minutes, stirring, until browned in places, then add garlic. Fry another 60 seconds, then add beaten eggs and scramble quickly, combining evenly with the soyrizo. Turn off flame just before eggs are fully set and remove pan from heat.

Divide potatoes and eggs among serving plates. Top with cheese, cilantro and/or yogurt.