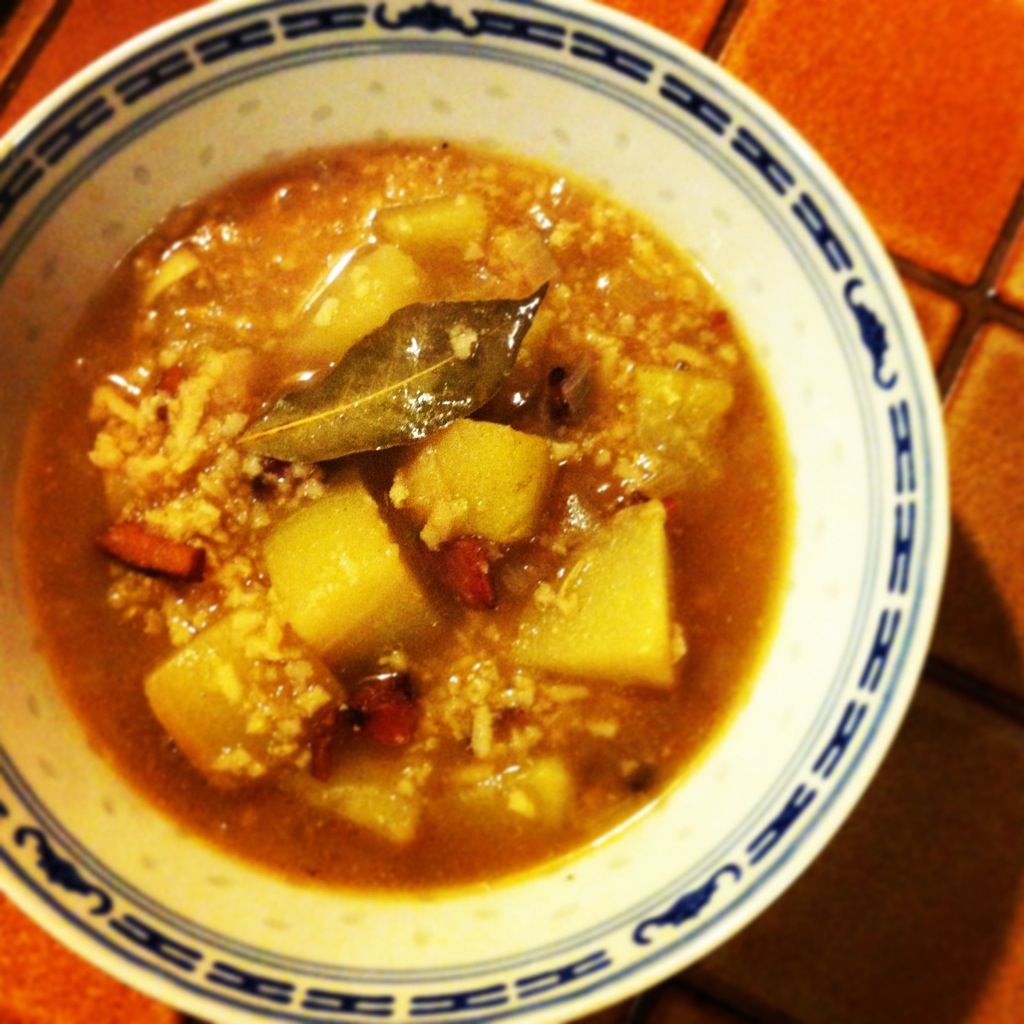 Better, even, than colleagues that love to eat are colleagues that are significantly better than I am at hunting, gathering or growing food stuffs with their own two hands. One of those people is my buddy Gordon.

To date, I have Gordon to thank for two Chinese fish dinners (fresh caught lingcod!); a hearty stir-fry made with winter melons plucked straight from the vine — and tonight’s soup: a mild, rustic and fusiony creation featuring Gordon’s homegrown chayote squash in a flavorful, porky broth. Thanks, G!

Chayote is a winter gourd popular in Central American cooking. It’s funky looking as heck, all bulbous and dimpled and wrinkly, but on the inside, it’s a pretty green with a slightly starchy texture not unlike an under-ripe melon. Similar to okra or other winter squash, chayote can be just a wittle bit slimy when cut, but don’t let that dissuade you. There’s nothing slimy about chayote once it’s cooked. In quick stir-fries, it holds onto a nice crunch that defies its squashy heritage. And in soups, like this one, it becomes pleasantly tender. In fact, it’s similar to Chinese winter melons, which might explain why chayote is also popular in Asian-style preparations.

I call this soup “dirty” because I like to deeply brown the bacon in the same pan to which I add the veggies and broth, which inevitably leads to a muddier product in the end. Fine with me, but not the most attractive, I’ll admit. If you want to a clearer broth, you can brown the bacon in a separate pan and add it back into a clean stock pot with the veggies. Your choice. If you ask me, dirty chayote anything just sounds, well, delicious. Giggle.

Note: Trader Joe’s sells a variety of quick-cook brown basmati rice that I like for things like this since it becomes comfortingly sludgy when steeped in the broth. (Prepared as standard rice it’s a little soggy for my tastes.)  An easy alternative would be to add any leftover cooked rice to the recipe, instead. If you go this route, add the rice about 10-15 mins before serving.

Add sesame oil and bacon to a cold Dutch oven or soup pot and heat on a medium high flame until bacon is rendered and crispy, stirring occasionally, about 5 minutes. Add onion and chayote and sweat veggies until onions become translucent, 5-7 mins, scraping up bacony bits from the pan as you go. Add stock, bay leaf and uncooked rice. Bring to a rolling boil; then cover, reduce heat to low and simmer for 30-35 mins or until chayote is very tender. Add salt to taste, if necessary.