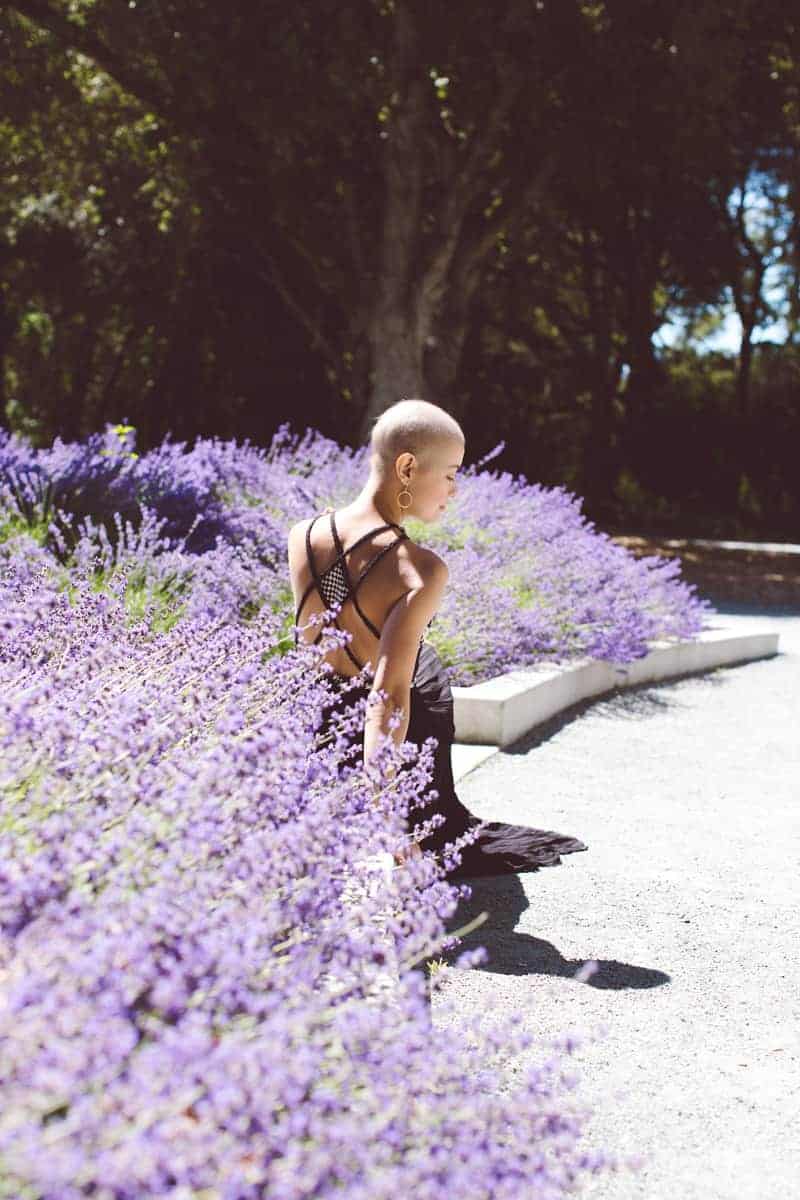 Pigtales is a glimpse at the going-ons that take place (mostly) outside of the P&Q kitchen. Kiddo stuffs, things I love, general musings and other tales from my life as a momma, wife and semi-professional goofball. This particular post is about my personal experience with breast cancer treatment. For more about my initial diagnosis, see this post.

I’ll jump right in with the disclaimer that this post isn’t going to start out pretty, and it likely won’t wrap up pretty, either. It’s not intended to solicit pity or, conversely, to suggest that what I’ve been through on this journey is any worse than (and in reality, I’m sure it’s far from) what others have faced in their experiences with chemotherapy or cancer or any other hardship.

I realize that, for many people in this world, this cancer — which I am fighting, voluntarily, with Western Medicine and first world technology and a shitload of health insurance — should not even qualify as a hardship.

But — and I say this with an acute sense of Privileged Guilt — it is the hardest shit I’ve ever faced. More physically and emotionally draining than I could have anticipated, particularly in light of the many anecdotes I heard from my doctors and nurses and fellow survivors about “working through chemo.” Or working out (!?) through chemo. Or birthing babies (!?!?) through chemo. The healthcare industry sells chemo as something that “has come a long way,” with many patients these days experiencing almost “flu-like” side effects. So when chemo turned me inside out, I felt weak and inferior. Like I was failing this massive test of fortitude, and it ruined me.

I don’t write this with the intent to scare, or to dissuade anyone from pursuing similar treatment.

I’m sharing this so that, if you’re out there feeling the same way, you know you’re not alone. 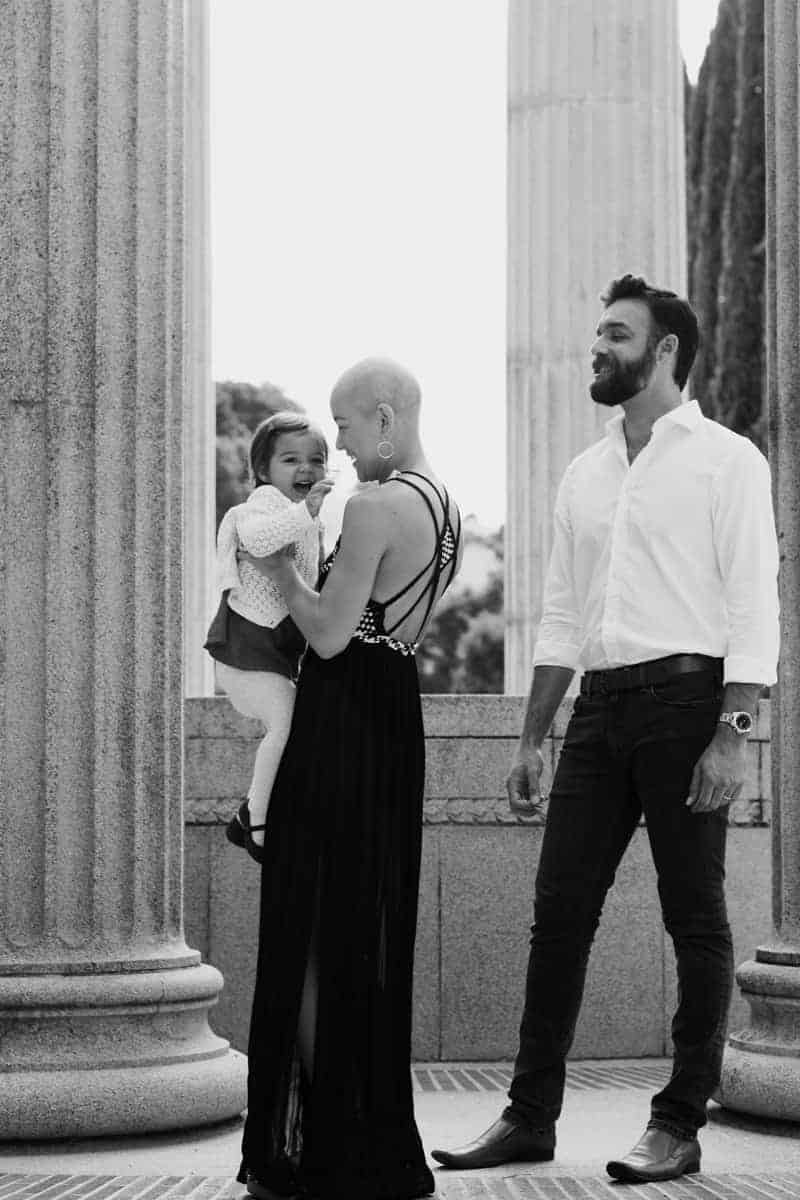 My prescribed chemotherapy regimen (of TCHP, or Taxotere, Carboplatin, Herceptin and Perjeta) consisted of an infusion every three weeks for six cycles, or rounds. My first round went something like this: after two days of feeling relatively normal and energized (which I now recognize as the pre- and post-chemo steroid regimen doing its thing), I woke up sick to my stomach and stayed that way for almost five days. My appetite was non-existent. The idea of drinking even small sips of water seemed impossible. I constantly felt something I can only describe as a “fullness” in my esophagus, willing me not to let foods pass into my body. At the same time, with my stomach was so emptied, my profile showed a deep, cavernous dip under my ribcage. Where my pleasant little pooch of a tummy once lay was now a sunken shell, sharing both the glamour and appearance of a drained swimming pool. My face was gaunt. It was a challenge to stand up straight. And the tears would not stop flowing.

The idea that I couldn’t bring myself to be the energized, functional cancer patient that I had envisioned broke me into pieces.

I was surrounded by family supporting my every move — both literally and figuratively — and pouring their love into Lana, but I was consumed by (my own, self-imposed) feelings of inadequacy and guilt every time I retreated back to bed.

At the root of it all, I cried because I finally felt sick.

And then, somewhere around the sixth day, thanks in part to the company of good girlfriends, several half-slices of carefully nibbled sourdough toast and the assumed waning of chemicals in my system, I began to feel like myself. I reset my expectations for the next treatment. My oncologist floated a spirit of longer-lasting anti-nausea drugs in my chemo cocktail, and I managed Rounds 2 through 4 with increased trepidation and fatigue but decidedly less distress. We developed a routine. My in-laws would come out every three weeks to stay with Lana while I attended pre-chemo appointments on Thursday and chemo on Friday, accompanied always by a game-faced loved one. I’d feel mostly good — normal, even — on Saturday and Sunday. And by the time my appetite declined and my mood began to dip on Monday, my mom would take over, occupying our little Lana for up to a week so I could rest and recover during the hours Chris was at work. We were managing. And I attempted to swallow my pride and allow my body the time it needed to fall unceremoniously apart and reassemble itself again. 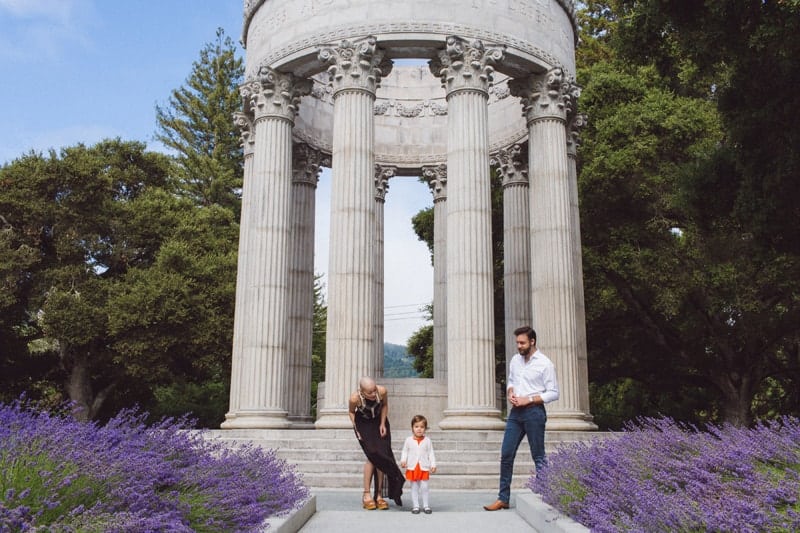 By the time Round 5 was upon us, my optimism had almost returned. The end, it seemed, was in sight. Chris reminded me daily that I was so close. That we were so close. As a dangled carrot, I booked a post-chemo trip with my best friend, Kevin — a pilgrimage to see Celine Dion in Las Vegas 15 years in the making. It was the home stretch.

Two days after my fifth infusion — and just a day after my first shot of Neulasta, an injection designed to stimulate white blood cells within your bone marrow to help offset an immune system compromised by chemo — we hosted Lana’s second birthday party, an intimate garden party brunch in the backyard. It was everything we wanted for our sweet (not such a) baby girl. Family, friends, Fruit Loop-topped donuts and, save for the bigass bow on my head, very few reminders of the cancer that had hijacked our lives six months prior.

So when I awoke the next morning, as sick as I felt after that very first infusion, my delicately rebuilt psyche withstood those looming waves of depression with all the strength of a sandcastle. The idea that I had made it so far only to feel sick with failure again dissolved my optimism almost instantly. I was very nearly back where I had started.

A few hours later, I found myself standing in the shower, staring at my glittery, birthday cake pedicure, willing myself to move or cry, but too exhausted to do either. I passed 10 minutes this way. Then 15. Then 20. At 25 minutes, I plugged the drain and sat down for a bath. I wrote the beginnings of this post in my head. Counted the bathroom tiles. Said aloud some of the scarier thoughts I’d had since starting chemo.

(At one point during that very first round, I sobbed weakly into Chris’ shoulder that I just wanted to go to bed and not wake up. To be clear: it’s not that I wanted to die, but in that moment, the only foreseeable way to make the hopelessness stop was to make everything stop. Those were heavy words. If you’ve experienced true depression, perhaps you can relate.)

That evening, I called a Cancer Mama friend (much like blogger friends, they’re often virtual and wholly invaluable) to talk through some of my feelings. Or more accurately, to make sure I wasn’t crazy. That I wasn’t as weak as I was making myself out to be. That others before me had also cowered in the face of chemo’s chemical warfare. Breast cancer patients are painted to be these pink warriors of hope, spewing strength and optimism like pubescent body fluid.

Despite my best intentions, that was so not me.

So I voiced my concerns over the phone. How down I was feeling. How down I was feeling about being down when so many others in our shoes were worse off. Suffering from acute pains or grim diagnoses or fighting for one more day with their kids while I whined my way through a cancer that has, for all intents and purposes, been labeled by my medical team as Curable.

“Who the fuck am I to wallow in misery when others among us are dying,” I asked her. “They’re literally dying, and I’m hiding from my kid because I’m sad. What is wrong with me.”

“You can’t force yourself to be grateful,” I remember her saying, but with that cool, chuckly tone that friends use when they’re telling you something you should clearly know for yourself. “That’s not fair to what you’re going through at all.”

With her permission, I wallowed. And I Hulu’d. From bed, and without guilt, because it seemed like the only possible way to pass the time. “I can’t believe there are nine more hours until I get to go back to sleep,” I moped to my mom one morning, before settling in with one of Lana’s snack cups full of pretzels and the second season of Naked & Afraid.

I desperately wanted to give a rats ass about anything, but the only functional emotion I could access was despair.

Despite my pleading hope that the sixth and final round of chemo would be different, within two days of my last infusion, I was cripplingly sick. My immune system was all but nonexistent, my heart was racing due to severe dehydration and Chris and I logged not one but two date nights in Urgent Care, with me alternating between violent, wracking sobs, and apathetic cat naps.

Chemo was officially done, but I was still staggeringly, unshakably, chemically sad. 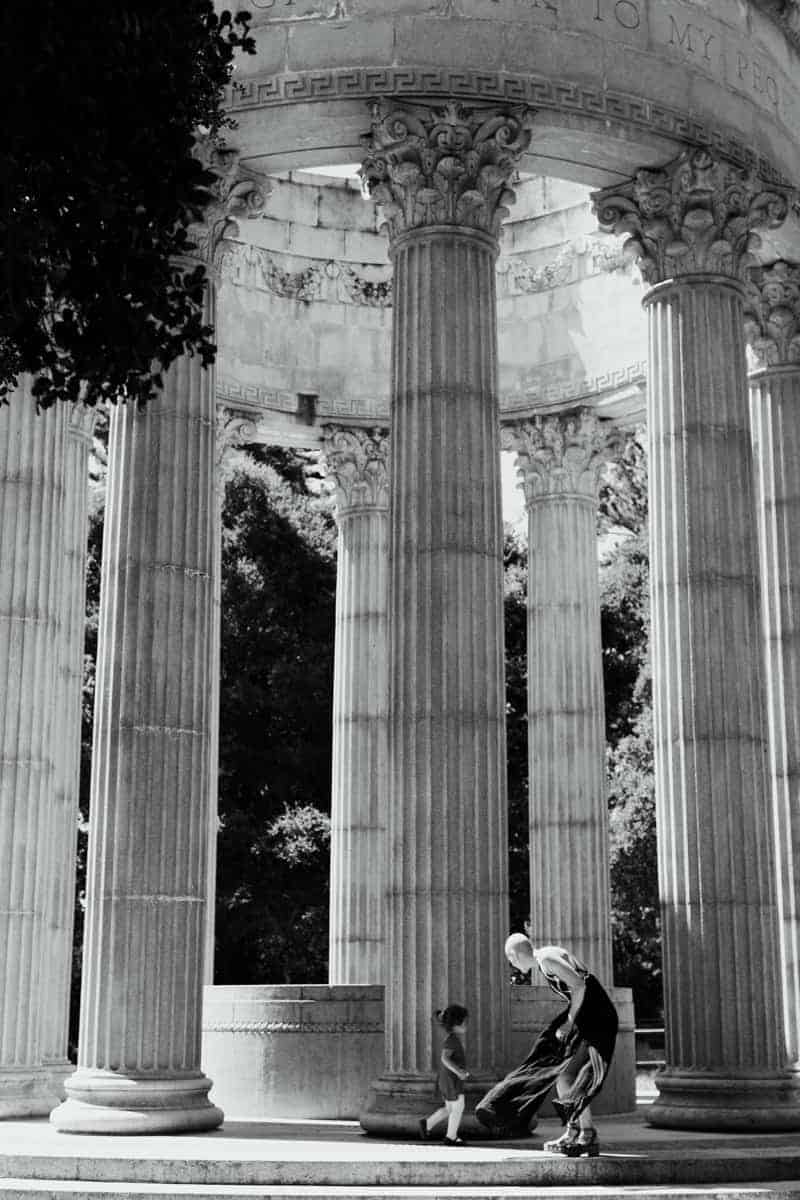 Ten days — and four more white blood cell boosting shots — later, I sat in my oncologist’s office, trying my best to communicate how poorly I had handled the last two rounds of chemo without using the phrase fucking railroaded. (I failed.) But for some reason, I couldn’t quite bring myself to fully detail just how down I had been. I found myself generalizing with cute little phrases like, “it was pretty damn bad,” or “the emotional toll was a little taxing,” but there was some underlying, prideful part of me that still couldn’t just say:

“I felt so alone.”
“I wanted to cease to exist.”
Or, maybe the most impactful: “I feel like I was misled about what to expect.”

To be fair, this rambling is not about pointing fingers or setting the record straight when it comes to chemo. And if any of the adages I heard over again from my medical team are true, it’s that everyone is different. Every body. Every cancer. Every treatment. I know this. And if I could somehow ensure that no one ever faces an experience as debilitating as mine again, I would. I would pay in spades. In unicorn lattes. In human baby teeth.

But if you’re reading this, and you feel like shit. If you feel absolutely nothing. If you feel like the Lifetime Movie Channel can’t even begin to touch what real depression feels like — it’s the meds, man. Which means, and you’ll have to trust me on this, it’s a temporary hell. It lifts, even if ever so slowly.

And when all is said and done, there are few more divine than Celine.

p.s. tremendous thanks and big hugs to Kait Miller for all of the imagery in this post. ♥ 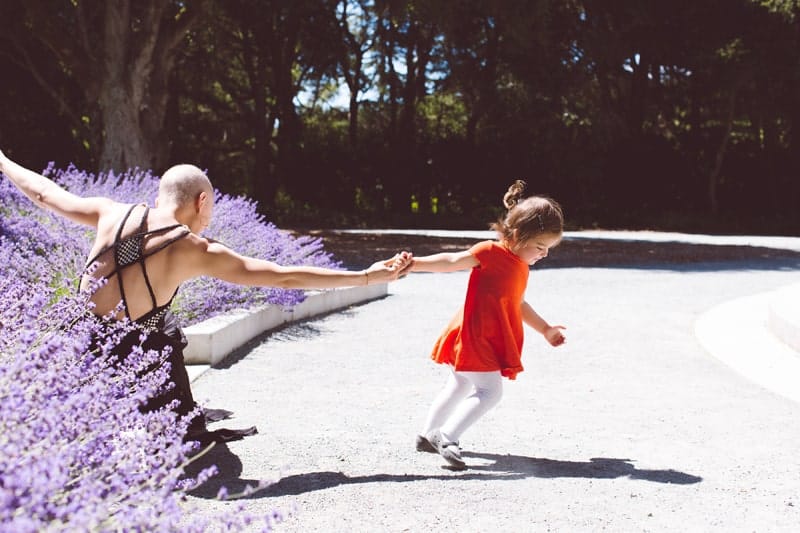